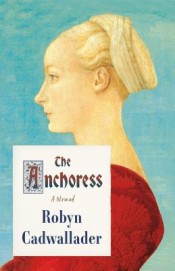 Much of The Anchoress takes place in a room—the only door nailed shut, just two windows opening into a church for communication and supplies, the only adornment a crucifix—but the novel’s scope is sweeping; Robyn Cadwallader’s novelistic debut is a captivating and provocative masterpiece.

In 1255, in a small English village, Sarah has vowed herself to a lifetime locked in an anchorite cell, partly out of spiritual fervor, partly out of fear of her burgeoning womanhood, and partly from mourning for the deaths of her mother and sister in childbirth. Cadwallader complicates the emotional turmoil of the young anchoress through her visitors: the two maids assigned to caring for her earthly needs—one of whom becomes pregnant out of wedlock—the village women who come for guidance, the confessors who monitor her development, the lord of the land who lusts after her, and the ghosts of the previous two anchoresses—one faithful to her vows, the other not. Sarah soon finds that her hopes to escape her sorrow and a cruel world are in vain. “I had thought the walls were made of stone, that they would seal me from the world,” she says. “But they fade and crumble.”

This first person narrative is interspersed with the third-person perspective of Father Ranaulf, who is dragged from his beloved scribing to act as confessor to Sarah. These chapters are necessary to advance a plot that Sarah can only intuit from her cell, but the plot is so compelling that there is no want for Sarah’s flowery perspective. The dialogue is rich, peppered with enough Medieval English vocabulary and styling to ground the historicity of the novel while being effortless to read, a historicity that in large part stems from Cadwallader’s Ph.D in Medieval Studies.

There is no anachronistic feminism here, but Cadwallader shows the strength of women living in an overwhelmingly patriarchal world, which seeks at all times to dominate even what little space is allotted to the women, even the sanctity of an anchoress’s cell. “He pushed the curtain open farther. I flinched as if struck, put my hands up to fend it off, that face. My cell was my body; my skin began and ended with these walls. No longer whole.”

Rich and beautiful, The Anchoress offers a bountiful reward to those who spend time within its confines.