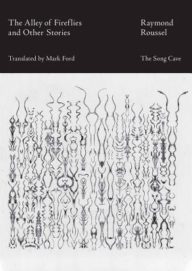 Translator Mark Ford’s introduction to The Alley of Fireflies once again sets out for readers what is known about the mechanisms Raymond Roussel used to create his writings. Roussel (born 1877, died by suicide in 1933) was a proponent of the idea that restrictions, rules, and strict forms were devices that facilitated creativity. Ford has been over some of this ground before: he is the author of a biography, Raymond Roussel and the Republic of Dreams (Cornell University Press, 2000), and has translated Roussel’s astonishing New Impressions of Africa (Princeton University Press, 2012).

In the introduction, Ford describes how the “application of problem-solving logic to the deliriously illogical narrative obligations generated” by procedures based on puns, homonyms, or on the substitutions of one of two letters in single word produce Roussel’s unique tone and fascinating mechanical contrivances—railway tracks made from the lungs of calves, for example—and chemical fantasies such as “resurrectine,” a liquid that reanimates the dead. But for all the originality of Roussel’s techniques, his works are peopled with the stock characters and interest in fairy tales found in much of the literature of the late 1800s, and play out in scenes among the most familiar to his time. There is a play within a tale that features enchanted cloth, sword play, a fairy godmother with a magic mirror, a potion and more. Gatherings at rich men’s homes feature in several works.

Adventures upon being shipwrecked also figure in several of Roussel’s works, including one story included here, “Among the Blacks” (this was previously translated, by poet Ron Padgett, in 1988; the others texts included here appear in English for the first time). This story is something of a plagiarism-by-anticipation (a term originated by the French writing group the Oulipo; a number of its members, including the late Harry Mathews, were Roussel enthusiasts) of the approach and tone we now think of as Borgesian. Here the narrator reads a new epistolary work by a friend, titled Among the Blacks. The book is a tale of shipwreck and imprisonment by an African tribe told in the form of letters carried by birds the prisoner manages to trap. A parlor game the narrator attends at the author’s home leads to the narrator assembling letter strings such as “LEEBCLASIPA” on the cushions of a pool table, a letter puzzle which, when solved, refers back to the title novel—a word game within the larger word game of the story, which shares a title with a larger work contained only within the story. These are the kinds of structures Roussel offers his readers.

Also included here are two episodes from an earlier, longer draft of Roussel’s most famous novel, Locus Solus. One is a hybrid mad scientist and fairytale story of a child who is a hybrid of man and flower. The other tells of the discovery of a previously unknown draft work by Shakespeare as well as one of his rib bones, and the magical effects this rib might be coaxed into producing.

The writing of The Alley of Fireflies, a planned novel, was interrupted by Roussel’s service during World War I. He tucked the fragmentary manuscript inside a copy of the newspaper La Liberté from May 1914 and did not take it up again after the war. What survives fills fifty of the one hundred pages of this book. Again the title of the novel fragment is also the title of book within the tale, a volume which took its name from an avenue on the grounds of the estate of Fredrick the Great where fireflies gathered. We read about a bored Voltaire, about his plan to add a chapter to Candide which concerned a vulgar poem about Joan of Arc, a poem plagiarized from an earlier play. . . . At this point readers find themselves down several mirroring levels, within a number of sets of (invisible) parentheses like the actual ones Roussel so vigorously and whimsically employed in New Impressions of Africa. Engagement by digression is a technique Roussel very much favored.

Within this tale, a level or two in, there is yet another framing device for fantastical presentations, one that is itself an idea-generator: a rich man sets up a competition, a sort of idea-factory competition that seems almost gladiatorial, to be conducted after his death:

The various prescriptions and prohibitions contained in the will eliminated all thoughts of gain, and there remained as incentive only the prospect of the great intellectual pleasures, the power of feeding the mind, inherent in possession of the matchless library of the château, which—just as the park contained few rare species or varieties—had otherwise little to offer.

Roussel’s works are filled with just these kinds of inescapable delights. Where some of the events he relates—shipwrecks, death by poisoned word, and more—would be tragic in the hands of other, more emotionally-manipulative writers, in Roussel’s stricture-directed hands they create intellectual delight and endless wonder. No matter how strict his generating techniques, no matter how Rube Goldberg his inventions, we always read them with pleasure (even a scene of someone engaging in philosophical thought at the bottom of a nearly-filled outhouse pit). For modern readers this is reinforced by the late 19th and early 20th century elements and tone and settings: they have, for us, an antique patina that his first readers—and very few they were—would not have felt, and this adds to their fantastical-yet-homey tone. As short and in places fragmented as this book is, it is a very worthy addition to Roussel’s shelf of works.