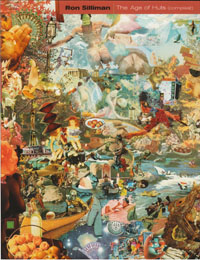 In the 1970s and ’80s, Ron Silliman made his name as a San Francisco Language poet. Like most of the Language poets, his early books were first published in modest quantities by small, avant-garde presses. Now, with the publication of The Age of Huts (compleat), some of Silliman’s most innovative early writings are once again in print.

Although much of the poetry in The Age of Huts has heretofore been difficult to come by, Silliman is hardly emerging out of obscurity. His book-length prose poem Tjanting, one of the major Language writings of the ’80s, was republished by Salt in 2002; his book of criticism The New Sentence (Roof, 1987) helped define the poetics and politics of the Language movement; his anthology In the American Tree (National Poetry Foundation, 1986) did for the Language poets what Donald Allen’s The New American Poetry did for the avant-garde of the 1950s; and his acclaimed blog (ronsilliman.blogspot.com) has become an institution in its own right.

With the publication of The Age of Huts and the forthcoming publication of The Alphabet (University of Alabama Press, 2008), it has become easier to assess Silliman’s oeuvre to date, and to compare his achievement to his modernist forbears, which include Ezra Pound, Gertrude Stein, William Carlos Williams and Louis Zukofsky, among others. Following the example of the modernist long poem, Silliman is at work on a life poem, which he has titled Ketjak. This poem comprises The Age of Huts,Tjanting, and The Alphabet, and will eventually include his current project, The Universe.

What distinguishes Silliman’s postmodern magnum opus from Pound’s Cantos or Williams’s Paterson is his commitment to rigorous procedural forms. In many subsections of The Age of Huts, Silliman uses exacting, predetermined rules to structure his writing. The first section—also titled Ketjak—is a 98-page prose poem divided into paragraphs of increasing length. The first paragraph has one sentence, the second has two, the third has four, and the fourth has eight. One expects the fifth paragraph to have 16 sentences, but instead it has 14, while the sixth has 28. The seventh and eighth have 54 and 108 sentences, respectively. Presumably, if one kept counting, this doubling-minus-two pattern would continue (though few readers, myself included, are going to count 98 pages’ worth of sentences to see if the formal pattern is consistent).

Within the increasingly long paragraphs of Ketjak, sentences repeat and expand. Here, for example, are the first three paragraphs of the poem:

Revolving door. A sequence of objects which to him appears to be a caravan of fellaheen, a circus, begins a slow migration to the right vanishing point on the horizon line.

Revolving door. Fountains of the financial district. Houseboats beached at the point of low tide, only to float again when the sunset is reflected in the water. A sequence of objects which to him appears to be a caravan of fellaheen, a circus, camels pulling wagons of bear cages, tamed ostriches in toy hats, begins a slow migration to the right vanishing point on the horizon line.

These paragraphs employ a formal innovation that Silliman and other Language poets dubbed the “new sentence,” a mode of writing that often features scrambled syntax, fragmented grammar, and narrative disjunction. Because it’s difficult to connect one sentence to the next, readers must pay heightened attention to the text. If one reads carefully, one encounters not a narrative but a collection of material details that—taken as a whole—provides an interesting picture of Silliman’s life in the ’70s. Silliman writes, “Attention is all,” and indeed he is thoroughly attentive to quotidian events:

The nurse, by a subtle redistribution of weight, shift of gravity’s center, moves in front of the student of oriental porcelain in order to more rapidly board the bus. Awake, but still in bed, I listen to cars pass, doors, birds, children are day’s first voices. A cardboard box of wool sweaters on top of the bookcase to indicate Home.

As sentences expand and become interspersed with others, one experiences a sense of repetition in reading that is analogous to the repetition inherent in the mundane events of everyday life. The fragmented and occasionally gritty details that cycle through Ketjak and through the rest of The Age of Huts suggest a larger, urban world. As Silliman puts it, “The form itself is the model of a city, extension, addition, modification.”

The Age of Huts contains a variety of other experiments, including Sunset Debris (a section of prose poetry written entirely in questions) and The Chinese Notebook (223 aphorisms on the nature of language and the definition of poetry). Perhaps the most interesting procedural experiment in the collection isBART, an 11-page prose poem consisting of a single run-on sentence written entirely on a Bay Area Rapid Transit train on the afternoon of Labor Day, 1976. In addition to documenting what he sees on the train, Silliman frequently makes metatextual gestures toward the act of writing itself; at one point he even proposes an “anthology of literature scribed on public transit.”

For readers who have not read Silliman before, The Age of Huts is a fine place to start. It collects some of his best early work, and it also foregrounds some of the major concerns of the Language poets: the relationship between language and politics, the effects of grammar and syntax upon representation, and the function of poetry in a postindustrial society. As Silliman and his fellow Language poets transition into a more mature stage of their careers, and as Language poetry itself becomes a recognized—if still divisive—part of the American poetic canon, it becomes possible to consider the provocative early Language writings with a measure of historical detachment. At a distance of three decades, Silliman’s early work remains valuable not only for its importance within an avant-garde tradition but also for its continuing relevance today.