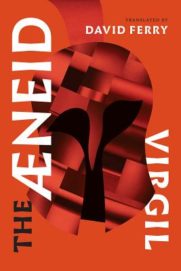 In a poem in his 2012 collection Bewilderment, David Ferry works with a letter in which Goethe says, “To live / Long is to outlive many.” Ferry’s poem is about “The death that lives in the intention of things / To have a meaning of some sort or other.” The imagery of loss and yearning in the work of this mature master suggests how suited he is to appreciate that same profoundly mournful quality in Virgil’s epic, The Aeneid. Every new translation holds its mirror up to the original, so we might ask: by what features might a reader in English come to know Virgil in Ferry’s version?

The tone of Virgil’s poem is frequently elegiac. During passages of warfare, Virgil even tends to be exquisitely delicate, as can be seen in Robert Fitzgerald’s 1983 translation:

The Argive fleet,
Drawn up in line abreast, left Tenedos
Through the aloof moon’s friendly stillnesses

Ferry’s “under the silent / Stillness of the moon,” by contrast, falls a bit short in phrasing the total beauty of Virgil’s “per amica silentia lunae,” but his translation often has a measured eloquence that can be full of feeling:

Aurora rose, spreading her pitying light,
And with it bringing back to sight the labors
Of sad mortality, what men have done,
And what has been done to them; and what they must do
To mourn.

Ferry’s version gains by its simplicity of language, especially as The Aeneid offers “a quick succession of events.” Where another prominent Virgil translator, Robert Fagles, gives us “One hope saves the defeated: they know they can’t be saved” in his 2006 version, Ferry conveys thoughtfully and simply that the defeated are “clarified by despair.” In Book II’s recounting of the fall of Troy, the merit of Ferry’s simplicity is palpable; the narration flows but retains a literary quality. The tone of his work feels carefully accomplished, as when he describes the bewilderment of Turnus as he is pursued by Aeneas to his death:

It’s as in sleep, in the quiet of the night,
Our languid eyelids close and in their dream
Won’t tell wherever we are nor where we’re going
Or trying to go nor can we get there where-
Ever where might be, and who knows who it is
We maybe are, our legs gone weak, no way
To get there where?

Passages both of warfare and human suffering abound in The Aeneid, as they do in Homer’s The Iliad and The Odyssey. In Ferry’s version, there’s a notable balance of an eloquent sensibility and a narrative simplicity—both of which Virgil’s epic demands, often simultaneously.