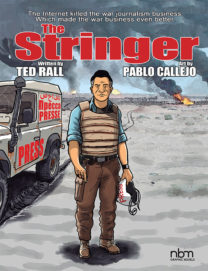 Join Rain Taxi for a special lunchtime conversation on politics, prose, and pictures with graphic novel creation duo Ted Rall and Pablo Callejo. Their new book, The Stringer (NBM Publishing), is an ode to when fact-based journalism mattered, set at an important turning point a few years ago, as well as a globe-trotting, action-packed, timely statement about how a society without a vibrant independent culture of reporting can degenerate into chaos. Don’t miss this chance to hear these trans-continental collaborators talk about their work!

Editorial cartoonist, essayist and graphic novelist Ted Rall grew up near the Rust Belt city of Dayton, Ohio. He won a scholarship to Columbia University in New York, which expelled him for academic and disciplinary reasons during the long hot summer of 1984. He has since become a widely-syndicated cartoonist, a Pulitzer Prize finalist, twice the winner of the Robert F. Kennedy Journalism Award and the author of more than twenty books, including a number of comics biographies covering figures from Bernie Sanders to Donald Trump. He returned to Columbia in 1990, where he graduated with honors. He lives in New York.

Born in Leon, Spain, 1967, Pablo Callejo can't remember when he started to draw or when he first felt the need to tell stories through pictures, but he took his time, since he didn't try to get published until he was 32. His critically acclaimed comics releases include Bluesman (written by Rob Vollmer) and The Year of Loving Dangerously (written by Ted Rall). After years of living in Madrid, he moved to Luxembourg.