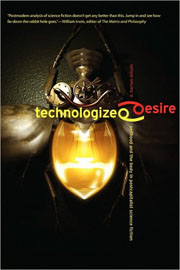 As a self-proclaimed irrealist, a pioneer of critifiction, and an author of “ultraviolent” tendency, D. Harlan Wilson is an entrenched participant in the postmodern (or post-postmodern) science-fiction milieu. He situates himself as no stranger to the narratives explicated in his first book of critical theory, Technologized Desire: Selfhood and the Body in Postcapitalist Science Fiction. Wilson’s new volume offers evocative, adroit analyses of the self (or the “terminal self”) in a variety of science-fictional speculations that explore the role of technology and media in relation to the future of late capitalism.

Wilson finds his specialized niche in Technologized Desire and makes bold assertions in regard to the future of the present media-driven “commoditocracy.” But, more importantly, he contributes a valuable voice to the discussion of postmodernity in relation to media, technology, society, and where the self fits in the thick of it all.

The author posits his thesis upon a slew of pre-existing postmodern philosophies, invoking such heavy-hitters as Frederick Jameson, Jacques Lacan, and Jean Baudrillard, to name a few. First aligning with Scott Bukatman’s notion that “cyberpunk texts contain the most effective representations of terminal identity,” he further defines the condition of terminal identity as subjects “compelled to mediate ‘a complex trajectory between the forces of instrumental reason and the abandon of a sacrificial excess.’”

Wilson explores this thesis by analyzing an array of entertainment media: books, short fiction, cultural studies, and most importantly, modern cinema. He states that “as we drown in the torrent of media that floods our daily experience . . . cinema becomes the dominant artistic and cultural medium.” Further, Wilson describes modern film as the “dominant postmodern medium” as well as “one of the largest global late capitalist enterprises.” Here, one notes the inextricable link between the roles of capitalism and “mediatization” in society, which Wilson aptly identifies as a “commoditocracy.” These elements are the foundation of Technologized Desire’s discussion of the terminal self: the “blip subject, a conflation of the human and the technological distinguished by a new, oppositional subjectivity.”

To understand the essence of Wilson’s text, one must also understand the definition of postcapitalism within the context of Technologized Desire. He differentiates between two schools of thought: “Some have associated [postcapitalism] with a reversion to a primitive society in the wake of global cataclysm. . . . More commonly it denotes an amplification or extrapolation of capitalism in its current form.” Wilson takes the latter stance and argues that the progression of today’s late capitalistic society to a postcapitalistic one is an inevitability—a natural evolution of the overly technologized world. The terminal self is the product of this world, a “desiring-machine whose contours are defined by the technetronic mediascape of late capitalism, which equates adequacy with excess.”

Technologized Desire’s appeal stems from Wilson’s unique critical approach. His use of popular cinema and fiction as crucibles for analysis engages readers on their own playing field. He tackles the issue of the self and the mediatized body by analyzing Cameron Crowe’s popular film Vanilla Sky. Wilson asserts that “in postmodernity there is only one self: the capitalist self.” To be terminal is to lose the freedom of choice, and “technology imperils individual choice by surrendering it exclusively to the wiles of capitalist enterprise.” Vanilla Sky’s protagonist, David Aames, is the perfect example a man who thinks he has a choice, but, by Wilson’s interpretation, does not.

Perhaps the most interesting (and humorous) analysis of science fiction here occurs in Wilson’s reading of Sam Raimi’s cult classic Army of Darkness as a schizophrenic narrative. He identifies the film as a “pathological wish-fulfillment invoked by the powers of late capitalism.” Ash, the protagonist in Army of Darkness, cannot separate himself from the consumerist, capitalistic mindset, even in a dislocated time. He is a “psychic cyborg . . . subject to the machinery of late capitalism.” Ash is also what Wilson defines as a postmodern slave, where “freedom is an intricate mythology that penetrates and produces the subject/slave on multiple levels.” The slave master: late capitalism. Army of Darkness provides an excellent vehicle for further investigation of “advanced capitalism and its pathological effects.”

If Technologized Desire bears any real flaw, that flaw rests in the paradoxical nature and density of postmodern analysis itself. Wilson participates in an ongoing conversation with the fathers of modern and postmodern philosophical thought, and he utilizes these various philosophies as building blocks to establish his own logical and philosophical assertions; Wilson’s primary talking points—terminal selfhood, media, technology, the evolution of late capitalism—are all concepts dependent upon the philosophical ideas that have preceded them. A reader not well versed in Lacan or Baudrillard may, then, find some barrier to comprehending the minutiae of the book.

Nevertheless, this complexity does not hinder the overall success of the work. Technologized Desire is designed to appeal to a larger, more mainstream readership than just those drawn to literary criticism or post-postmodern theory, and relies upon popular media, specifically film, to ensure a greater accessibility to readers. And, regardless of the intimidating list of philosophers and philosophies therein, Wilson does a commendable job of defining the complex critical theories and terms discussed and presented. While the ideal reader would already possess a sense of what postmodernism is in the context of social and cultural discourse, any reader ready for the intellectual challenge can fully appreciate the gravity of this text.

Technologized Desire proves itself to be a rich addition to the growing canon of 21st-century critical theory and literary criticism. Wilson is an author who expresses a clear concern for the future; his book is an urgent text of keen observation and wide-reaching social commentary that warrants nothing less than a careful, thoughtful read.