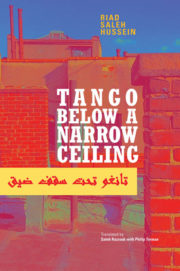 It sounds like something from a novel: A young deaf poet, influenced by the Beats and Surrealists, creates provocative experimental work, draws the attention of governmental authorities, and dies after imprisonment and torture at the age of twenty-eight. But this brief summary accurately describes the life of Syrian poet Riad Saleh Hussein (1954-1982), a remarkable writer with an expansive spirit whose work is now available in English translation.

While Surrealism influenced artists around the world with its call to delve into the unconscious, it’s still surprising to see how powerful an influence it had on Hussein. In “Wishes” he writes:

The influence of André Breton and César Vallejo can be felt here, with the poem’s exploration of hidden and paradoxical desires. Yet Hussein makes surrealism somehow personal, something only he could envision, as seen in the closing of the same poem:

I want to make every word a tree, a loaf of bread or a kiss
I wish for whoever does not love trees
Bread
And kisses
To stop talking

The poem “167 CM” displays even better Hussein’s ability to bring an earthbound specificity to his wildly imaginative lines. This poem, in fact, sounds a bit like a surrealist resume or personal ad:

Playfully bragging at first about his good looks, Hussein soon moves to unusual imagery. He wants to be useful by becoming a tractor, but he’s a “broken tractor,” unable to be of use. He confesses he’s unemployed, a revelation which brings images of death: one death for each month of unemployment.

Hussein’s fearlessness to speak about social issues in his poetry frightened the authorities. Lines like these, from “War, War, War,” show his courage:

Arrested by the authorities, Hussein was released from prison in less than a week, but the damage was done; already in bad health, he died months later. Thanks to the flowing translations of Saleh Razzouk and Philip Terman, however, we can now witness how talented he was at such a young age.

While this selection of Hussein’s poetry amply displays his poetic skills, it’s odd that no prose poems are included, especially since the introduction and the cover copy both emphasize how Hussein “continued to revolutionize prose poetry in Arabic.” Perhaps the translators will offer a second collection that focuses on these prose poems. Until then, we have Tango Below a Narrow Ceiling, filled with transformative poems, an important window into a transformative voice.