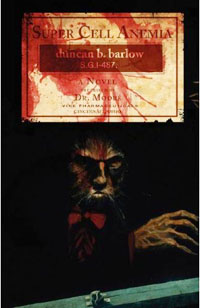 In Cincinnati, there lives a man who sometimes emits an electric spark so strong that it burns holes in fences and household furniture. He spends his days and nights either at the office of a somewhat dubious occultist physician, with a Russian dancer who works at a sex shop, or in pursuit of a mutant half-man/half-cat through the abandoned subway tunnels beneath the city. The man’s name is Gilles and he is the protagonist of Duncan B. Barlow’s mysterious and strange new novel, Super Cell Anemia. Through first-person journal entries, third-person narrative, and the occasional tract of modern anthroposophy, Super Cell Anemia offers a wide-ranging jaunt into a gnarly and somewhat schizophrenic urban universe.

Set over a period of thirteen days, the novel follows its main character through an extraordinary series of events and acquaintances. Gilles, an obsessive-compulsive young man afflicted by a rare illness that causes his muscles to generate large amounts of electricity, has moved to Cincinnati in order to be close to Dr. Moore, the only physician who has been able to help his suffering (all the others just sent him to a psychiatrist, assuming the illness to be psychosomatic). Dr. Moore has suggested that Gilles is in need of a muscle transplant and has prescribed copper strips for him to chew on as a way to control the potentially lethal electric surges in his body.

Although the novel utilizes some conventions of speculative fiction, the premise of Super Cell Anemia owes as much to the legacy of Kierkegaard and Kafka as it does to H. G. Wells and Edgar Allen Poe. Questions regarding illness and perception figure heavily into the novel’s conceit, providing an intriguing search for rationality in a world generally characterized by irrationality and medical confusion. The language of the novel is often laden with a gothic lyricism:

Gilles attempts to sit up, but four thick, black tentacles slither from the growing darkness and wrap around his chest. He can feel the bed sinking, and as it gains speed, he fears that his stomach might tear up through his mouth. For a moment, he can see himself with his stomach dangling out between his lips like a dripping wet balloon.

Between visits to his physician, Gilles lives a nervous and unconventional existence. He develops a fledgling, if somewhat challenged, romance with Charlie, a Russian immigrant’s daughter who was trained to be “the nation’s best dancer” but who now works in a sex shop. Part of Gilles’s time is spent attempting to understand why there is a mutant cat-man (whom Gilles dubs Calicoman) climbing up the side of his building at night. After some investigation, Gilles comes to believe that Calicoman is the leader of a local conspiracy to harvest human eggs and that two of Gilles’s neighbors are involved in the scheme—one of whom is sculpting regurgitated walnut seeds into small nests to serve as incubation chambers for the harvested eggs. Not all the people who live in Gilles’s apartment building are in on the conspiracy, however; Gilles’s landlord, an ingenuous and unexpectedly normal character named Roger, seems to be as surprised as the reader to find that one of his tenants is hiding nests made of regurgitated walnut seeds in heating ducts throughout the building.

The character of Gilles’s physician plays a central role in the novel. Because of his position, we might assume he is able to provide some answers for Gilles, whose world is characterized almost entirely by uncertainty. But Dr. Moore is also an outcast among the scientific community because of his passionate advocacy of the theories of Rudolph Steiner, the anthroposophist whose theories of education founded the Waldorf Schools and whose agricultural ideas were the first attempts at biodynamic farming. The novel has sporadic excerpts from Moore’s writings regarding “Spirit-Science” (the coming together of divine and corporeal realities that he believes Gilles’s electro-magnetic muscular condition embodies), as well as his social theories on community building. But the writings of Gilles’s physician are in a curiously antiquated dialect, and read like 19th-century religious tracts of an aristocratic prelate: “If a human lacks a connection to his spiritual side, he might never come to experience his full potential as a functioning member of society. Just as a blind man will never see, a percentage of degenerates will never come to good.” Although the doctor is represented as honest in his enthusiasm for his medical and spiritual causes, he also appears out of touch and not quite trustworthy in his analysis of Gilles’s condition or his own medical and theoretical pontifications.

Constructed as a story of intrigue, Super Cell Anemia relies less on questions of narrative suspense than on its own inexplicable oddness to drive the plot. The reader is not so much compelled through the pages to find out whether someone will catch the Calicoman in the act of harvesting human eggs or whether the police (who have it out for Gilles after he called them on a false alarm) will arrest Gilles for a crime he never committed. Instead, a progression of poignantly bizarre circumstances cause Gilles (and the reader) to keep pushing forward in the hope of arriving at some explanation for what is happening. Despite the surreal quality of the novel, Gilles’s quest for understanding is at root a human one, and the reader consistently identifies with Gilles’s sense of unease and desire to get a firm grasp on his bizarre existence. But Barlow hedges in proffering any physical rationale for the narrative’s obscurity; rather than hone in on a “solution” to the novel’s mysteries, he instead drives the story deeper into its own uncanny nightmare. Gilles’s search for answers over the course of the book develops from being generally hopeful to one characterized by insecurity and paranoia. One night, he follows Calicoman into the subway tunnels beneath the city and observes a woman there he believes is Charlie’s co-worker, becoming convinced that even Charlie is involved in Calicoman’s conspiracy.

As Gilles’s suspicions about those around him increase, the reader is forced to question the “truth” of the narrative, giving rise to the possibility that the story is less a recounting of events than a psychic contrivance of its protagonist—a sort of oneiric travelogue of a paranoid subconscious struggling to live in multiple realities. The final pages of the novel bring this issue of diegetic reliability to the fore, when Gilles’s confesses to Charlie his reluctance to trust people and his fear that everyone in the world is against him. Although Charlie suggests this fear is understandable considering his relationship with his mentally ill mother, for the reader, this admission addresses an issue that has dogged the story since the first paragraph, which indicated that all the doctors Gilles had ever seen said his afflictions were psychosomatic. Although the question of which reality is the “real” one is never entirely resolved, the novel does deal with Gilles’s own lack of mental self-control. Without giving away the surprise of the book’s ending, suffice it to say that the last moments of the novel are intensely unexpected and force the reader into reconsidering the events of the last 236 pages.

A striking and often gripping debut novel by a writer with a prolific and energetic imagination, Super Cell Anemia is charismatic, intelligent, and driven by an intellectual curiosity that substantiates its extreme imbrication of dream, illness, and reality.