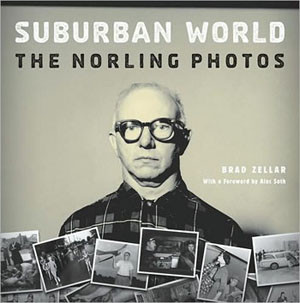 Over fifty years ago, a pioneering developer named William J. Levitt created the largest planned community constructed by a single builder in the U.S. Christened Levittown, the Philadelphia, Pennsylvania, suburb began the 1950s with muddy roads leading GIs and their brides to affordable homes of their own.

Levittown became the suburban blueprint for many communities to follow, including Bloomington, Minnesota, now known as the home of the Mall of America and the subject of a new book of photography called Suburban World: The Norling Photos. Built to encourage child-rearing, suburbs like Bloomington appealed strongly to young families. There, childhood was a story of Cub Scouts and block parties, of neighborhood barbeques and teen pageants, designed to extend the combination of childhood freedom and adult supervision into the turbulent years of adolescence. The new model of curvilinear streets, cul-de-sacs, and open, unfenced backyards that melted into one another formed wide swatches of open ground behind the houses. Children played in the street, around the houses, and through the neighbors’ backyards, with little complaint from the neighbors. In the summer they played well past dark or until their parents made them come in.

When Minnesota journalist Brad Zellar discovered a treasure trove of photographs by amateur photographer Irwin Norling in the vaults of the Bloomington Historical Society in 2002, he knew he had found something special. As Zellar writes in Suburban World, the book of carefully selected photographs he recently exhibited and published, among the 10,000 photos are “portraits of Shriners, shots of donkey baseball games, parades, rodeos, city council meetings, fires and horrific car crashes. There are family Christmas-card photos, documents of drug busts, and periodic shots of Met Stadium going up; there are pancake breakfasts, weddings and murder-suicides.” Norling captured the developing suburban America of the 1950s and ’60s “the way it was. And the way it was, that’s what I was after.”

A competitive amateur glued to his police radio, Norling also spent years chasing murders, traffic accidents, and home explosions. Zellar calls these photographs the “strange juxtapositions, incongruities, and dark corners” of the suburbs, but really they are the tragedies of any community, urban or suburban. The more particular dark sides of suburban communities were there even when Levittown began. Levittown discriminated against blacks, and domestic violence was never acknowledged. Introducing sprawl is another long-term effect for which Levitt has been widely criticized. To live in segregated utopias, where homes were calculated to keep both the rich and the poor out, families were willing to drive further to work, increasing dependence on automobiles and foreign oil with every decade that went by.

In short, the history of the suburbs has always alternated between reverence and rebuke. In post-World War II America, film and television often depicted suburbia as a land of calm and plenty, with gleaming appliances in every corniced kitchen. Representations grew increasingly critical in the 1960s and the decades following, perhaps most famously in films such as The Graduate and, more recently, American Beauty. From the beginning, alongside the American dream has been its exact opposite—suburbs as a place of stress, family dysfunction, and even despair. 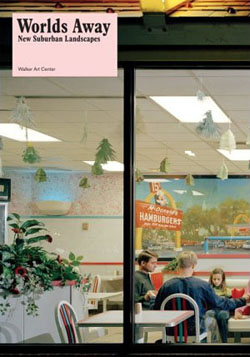 Today, some experts would prefer that our ideas about the suburbs edge toward a more complicated middle ground. This is the story that the curators of the book and exhibition Worlds Away: New Suburban Landscapes try to tell. It is a story that includes religious longings and identity-building along with corporate duplicity and tax benefits, and one that addresses sprawl even as it concedes that not all suburbanites are white and middle-class.

Organized jointly by the Walker Art Center in Minneapolis and the Heinz Architectural Center at Pittsburgh’s Carnegie Museum of Art, and curated by Andrew Blauvelt of the Walker with the Heinz’s Tracy Myers, the thesis of the show is straightforward. As Blauvelt puts it in the catalog, “the contemporary suburb remains surprisingly unconsidered, at least on its own terms.”

Although that statement is not quite true for novelists, photographers, and movie directors, it remains a fair critique of the architecture world. Historian John Archer argues in his essay “Suburban Aesthetics Is Not an Oxymoron” that the aesthetic establishment “circled the wagons” against suburbia in the 1960s, outlining a conservative dogma that continues to shape the way critics want us to think about suburbs today: “the critique of suburbia has maintained its disdain for the working-class and petit-bourgeois tastes of those who choose, and prefer, to live in developer-built, mass-marketed, tract house environments.”

The architectural critic Peter Blake may be emblematic of this interpretation with his 1964 book, God’s Own Junkyard. In an often-repeated quote, Blake vilified suburbia’s “interminable wastelands dotted with millions of monotonous little houses on monotonous little lots and crisscrossed by highways lined with billboards, jazzed-up diners, used-car lots, drive-in movies, beflagged gas stations, and garish motels.”

If Archer’s essay sets up the primary target of the curators, then the majority of the book offers a revisionist, if not contrarian, take. With few exceptions, the catalogue contributors are eager to argue that the suburban landscape, once seen as bereft of possibilities, instead holds many opportunities for creative engagement.

Organized in nearly a patterned manner, the essays sometimes illuminate and complicate the art and architecture and vice versa. In one article, New York Times columnist David Brooks marvels at how millions of people constantly propel themselves forward, changing jobs, housing and communities, still clinging to the central cliché called the American dream. Following his essay are photographs by Minnesota photographer Laura Migliorino from her series The Hidden Suburbs: A Portrait, in which a family from Africa poses in front of their garage or a biracial family poses at the edge of a development’s lake. Subsequently, artist Dan Graham proposes his Alteration to a Suburban House(1978/1992), where he replaces the facade of a typical suburban home with a clear glass exposing the home’s inhabitants, as if divulging our fantasy-based dreams.

Among the most compelling projects in the catalogue is a study by Teddy Cruz, the San Diego architect, on the two-way movement of attitudes as well as objects across the U.S.-Mexico border. His photographs document the process by which parts of older houses in the San Diego suburbs—garage doors, aluminum window frames—are salvaged before they can reach the landfill by professional or amateur contractors, who then drive them south across the border. There, they become the building blocks of ad-hoc housing in Tijuana and other poor Mexican cities.

Meanwhile, Mexican immigrants flowing legally and illegally into San Diego County bring their own traditions and tastes to the suburban landscape of Southern California, transforming its culture from the bottom up. Estudio Teddy Cruz is working on a prefabricated frame produced by a Mexican assembly plant for housing in Tijuana that uses these recycled materials, as well as a mix of affordable and senior housing for poor neighborhoods like San Ysidro in suburban San Diego.

Certainly there are limits to how architects can intervene in such dynamics. The curators would readily admit that they never intended to document every condition of the suburbs today, nor offer solutions. “Rather,” says Blauvelt in his introduction, “it features the work of artists and architects who, without that burden, have imaginatively considered the subject.”

Across the nation, new suburban neighborhoods that once held promise for thousands of families are now struggling with crime, blight, and falling home values. Perhaps before we prognosticate on what will happen, and certainly before we jump to retooling the neighborhoods, we could learn from those artists and architects who have a keen eye for the suburb’s weaknesses and possibilities. Quoted in the Norling book is good advice from the great American photographer Gary Winogrand: “There is nothing more mysterious than a fact clearly described.”