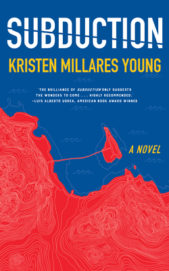 “She was merely passing through this world,” Kristen Millares Young’s character, Claudia, reveals about herself in the opening pages of Subduction, Young’s debut novel. Newly dislocated from her marriage and all the familiar routines, of course Claudia feels this way. But what does it really mean to travel through the world feeling so disconnected? This is not just an existential question, but a moral one, and it gets explored through the layers of community Claudia encounters and her psychological stance as cipher, persona, and curious eye on the world.

Claudia meets and becomes involved with Peter, a man who has returned to the Makah reservation where Claudia has come to escape her failing marriage and to do her work as an anthropologist, which requires nearly surgical skills of cultural extraction. Peter has returned to connect with his mother before dementia sets in and erases what he needs to learn before she’s gone. In fact, with Peter, who can “measure a day’s progress without searching his soul,” and Claudia, who like her father fills her life with “work” in order to avoid connection, we have quite a set of star-crossed lovers. Peter’s thought might be “I don’t belong here,” but it’s clear that both characters feel the same way about being in the world.

With Claudia, we are presented with what might seem like the worst kind of cultural anthropologist, a person “awed by the relics of true belief” but who herself has none. But rough and brusque as she may be, Young’s writing shows us that such a character, unable to hide her emotional wreckage and social awkwardness—a woman with “her mask no mask”—is perhaps in the right place at the right time without knowing it. Whatever “work” she thinks she is there to do, her journey is much more internal and personal than that of the typical, highbrow anthropologist. In this way, cultural differences and boundaries fall away to a human story of need and loss and recovery. The things Claudia learns have less do with the stories and music she has come to research than with the vicissitudes of her own heart.

Much of Claudia’s journey is a deconstructing of her own “greedy nature,” the anthropologist’s drive to study and take; she must learn to face the very things that have served her but keep her as oblivious as the moths pelting her window, attracted to the light of her computer screen. In this way, Subduction is a marvelous collision of people and their emotional landscapes, and much like the geologic action the title refers to, this activity is messy, violent, and natural—as natural as all humans are beneath their wants and needs, their masks and their cultures. And that is the beauty of Young’s novel: while it presents us with the ongoing problematics of cultural sensitivity and awareness and agency, it also reminds us that within these zones are ordinary people, as complicated as the weather and as simple as spirit animals bearing clear messages.

Subduction is most of all a story of displacement and dislocation: for Claudia, whose Latina heritage lies over a border and whose sense of family lies beyond the betrayal that broke it; and for Peter, whose tragic fractures from family and community instill an “inner nihilist.” But Subduction is also a story of healing, through both traditional cultural practices and the kind that transcend politics and place—namely the love two people feel for each other. At heart, Subduction is an optimistic novel, for out of the mess of politics and power imbalances and cultural confusion, love indeed creates the way for a new kind of life—even if the people involved stay “coiled inside this illusion” and “glad of the mask.”