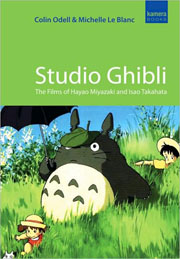 Animation is a lively and innovative art form that, when done well, can transport audiences to extraordinary worlds. Studio Ghibli, Japan’s preeminent animation studio, has for decades pushed the boundaries of what is possible and brought animation to new and exciting heights. Even the mighty Pixar is quick to sing the praises of Hayao Miyazaki and Isao Takahata, Studio Ghibli’s founders and chief creative forces. It is therefore all the more unfortunate that Studio Ghibli by Colin Odell and Michelle Le Blanc falls flat, somehow managing to make the extraordinary feel tired.

At fault are the book’s organizational structure and its lack of new information. The introduction includes lengthy exposition about how the films relate to one another thematically, but the choice to place analysis ahead of discussion of the films themselves renders this introduction virtually inaccessible. Following this, the studio’s films are described one-by-one in chronological order. The descriptions tend to vary in tone, ranging from the conversational to the analytical, which makes the book feel disjointed, and without a more narrative format there is a constant start-and-stop feeling to the book, which prevents the films from coalescing into a single studio identity. Had the authors woven the lengthy introduction into the play-by-play of the films, their desire to tell Studio Ghibli’s story and explore “the cultural and thematic threads that bind these films together” would have been supported by the structure of the book, rather than stilted by it.

Studio Ghibli is also notably lacking in first-hand accounts from anyone at the studio. The facts the authors present about the studio’s formation and film evolution are insightful, but can easily be found by perusing the web or visiting the studio’s official museum. In short, animators, enthusiasts, and Ghibli-geeks won’t find much useful here. If you’re already a fan, you’ve likely done this level of analysis and research on your own. If you’re new to the films, the inaccessibility of structure and lack of intimate expertise will likely keep you at arm’s length. If you’re hoping to understand the process of animation or how Manga goes from the page to the screen, look elsewhere. Studio Ghibli consistently produces some of the world’s most spectacular and imaginative animation; sadly, Colin Odell and Michelle Le Blanc fail to emulate the standards set by the studio they seek to bring to life.