Love and Resistance: Out of the Closet into the Stonewall Era
Edited by Jason Baumann
W. W. Norton and Company ($24.95)

The summer of 2019 marks the 50th year since the events of LGBTQ history known as the Stonewall Riots. Among the many institutions commemorating the anniversary is the New York Public Library, which is showcasing an exhibition open through July 19th, 2019. In addition to his work on the exhibit, curator Jason Baumann has also edited two books, drawing on the resources of the NYPL’s archives and collections: The Stonewall Reader, a collection of writings examining homosexual and transgender life before and after the riots, and the photographic collection Love and Resistance: Out of the Closet into the Stonewall Era.

In the summer of 1969, the Stonewall Inn was a burnt out shell of a restaurant turned mafia-run dive bar. A powder-blue “membership card” issued to circumvent state liquor laws gave its patrons access to watered-down drinks served in filthy glasses. It was not a nice place. But it was one of the few gay bars in New York City with a dance floor, and one of the few that didn’t turn away trans patrons, and hence a popular spot. After midnight on June 28th, the police raided the bar. The gay patrons were ordered to leave, but those in the bar who at the time might have identified as transsexual or transvestites or drag queens were roughly handled and arrested—under a section of the penal code prohibiting loitering which criminalized “being in any manner disguised by unusual or unnatural attire or facial alteration.” That night, though, the patrons of the bar and the residents of the Greenwich Village neighborhood held fast and fought back against the police, leading to a three-day riot.

The riots, sometimes historicized as the Stonewall Uprising, were not the first instance of a police raid being resisted, nor even the first riot led by trans women. They were preceded by the riots in Los Angeles at Cooper’s Do-Nuts in 1959 and in San Francisco at Compton’s Cafeteria seven years later. But owing to a number of factors that no one could have anticipated, the clash at Stonewall became recognized as a catalyzing event, so much so that American LGBTQ history is divided by it. Only the AIDS epidemic of the 1980s is considered as much of an epochal marker. In spite of its importance, though, the actual events and their participants’ roles are hotly debated. A riot is a very poorly organized event, and trying to create an exact historical record of one is, at times, like trying to staple mist to a kite string. 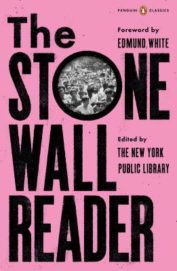 The Stonewall Reader does not attempt to create an objective record of the moment. Instead, the selections try to create instead an assessment of the lives of lesbians, gay men, and transgender men and women in the post-war decades, and how the culture (both queer and straight) was radically transfigured. Notably, the contributors from both the before and the after sections include a number of pieces by transgender contributors. Christine Jorgensen, considered the first successful subject of transitional surgery, writes about how she was exposed in the press while still recovering in the hospital. Transgender activist Mario Martinez documents the dehumanizing attitudes from the very legal counsel that was meant to help him and others. Of the convergence of the different identity groups in action that night, Queers for Economic Justice cofounder Jay London Toole writes: “Those seven or eight people that were arrested did not make that riot, did not make that rebellion, did not make that uproar. It was every fucking person that showed up in the thousands that made it.”

What makes The Stonewall Reader successful is Baumann’s editorial approach. Rather than trying to build a linear definitive take on the events, Baumann instead leaves room for different perspectives from the preludes and aftermaths. “Rather than provide another closed narrative of these tumultuous events,” he writes in the introduction, “my purpose has been to allow the reader to sort these mysteries out for themselves by reading the memoirs and the testimony of the participants and those immediately touched by these historic events.” 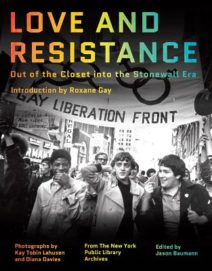 This approach carries over, albeit with a tighter focus, to Baumann’s second book, Love and Resistance. Drawing on the NYPL’s archives, the book collects photographs by Kay Tobin Lahusen and Diana Davies, whose visual records reflect the differences in their cultural backgrounds, and the changes in those communities that Stonewall initiated. Lahusan had come of age during the homophile movement of the 1960s, joining the first American lesbian organization, the Daughters of Bilitis, and becoming the art director for their publication The Ladder. Under her direction, the magazine transitioned away from cartooning and illustration work to include actual photographs of lesbian women; a brave and risky move during those days. Born eight years later, Davies grew up in a different culture and became involved with more radical organizations such as the Gay Liberation Front and Street Transvestites Action Revolutionaries. In addition to her contributions to the publication Come Out!, Davies documented the anti-war, civil rights, and feminist movements of the ’60s and ’70s. Their photographs depict the men and women—gay and bisexual, transgender and cisgender—who took to the streets to rally for change, to advocate that they didn’t have to be just like everyone else to deserve truth and beauty and freedom.

The two come from different backgrounds and ideologies, and their photographs, in both their subject matters and subjects, help to show the shift that happened in LGBT political action during that time. Common to the pre-Stonewall activism of groups like the Daughters of Bilitis and the Mattachine Society was an approach that could be called assimilationist, but could also be considered destigmatizing. It was the approach of presenting both homosexuals and homosexual desires as being comparable to straight society— “straight” in this sense meaning both sexually heterosexual and performatively normal: tax paying, god fearing, and all-American. Following the riots, activism became more confrontational and transgressive, paving the way for the more direct action of organizations like Queer Nation and AIDS Coalition to Unleash Power (ACT UP) during the AIDS epidemic. The people street fighting with the police that night had less to lose from capitulation than closeted suburbanites. For the patrons of the Stonewall—predominantly African American and Puerto Rican and no stranger to police brutality—love was literally a battlefield.