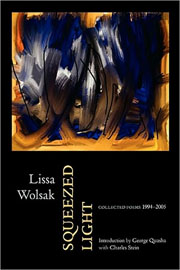 In Otherwise than Being or Beyond Essence, Emmanuel Levinas writes that “the birthplace of ontology is in the said,” and he prods us to think about what might lie before “language contracts into thought.” In Lissa Wolsak’s poetry, we live and breathe and achieve awareness in that state. Call it liminal or chora, call it the cloud of unknowing, it is a domain that is ethical, mystical, pedagogical, spiritual, and profoundly etymological.

Lissa Wolsak is an importantly unoriginal original poet, and Squeezed Light, her collected poems, is a major event. It begins:

As Wolsak writes a few pages later, it is writing built on the “swerve word     with / silence at its core.” It is rare to find a poetry where the open space is so essentially and carefully deployed; on that note, in their thoughtful introduction, George Quasha and Charles Stein suggest

The text converses with itself to make space for reading. In fact, reading is what it’s already doing, by way of textual self-dialogue and inquiry into the roots of its own conception. In the very density of the text is an always unknown kind of spaciousness. Perhaps something like this is carried by the Japanese word ma which can be rendered as space, time, gap, emptiness, negative space, or the space (time) between structural parts.

The text converses with itself to make space for reading. In fact, reading is what it’s already doing, by way of textual self-dialogue and inquiry into the roots of its own conception. In the very density of the text is an always unknown kind of spaciousness. Perhaps something like this is carried by the Japanese word ma which can be rendered as space, time, gap, emptiness, negative space, or the space (time) between structural parts.

The interval of the unwritten, the space between words, the space that we cross over to arrive at the moment when language contracts into thought, are crucial to the making of Wolsak’s poetry. In the poems, we arrive at a kind of temple of reading, a place where we reflect upon how and what we are reading. Again, Quasha and Stein describe the phenomenology of reading Wolsak’s poetry quite well:

So there is actual time, reading time. This is a singular act. While such unique timing may in some degree always be the case in reading, the difference here, in Lissa Wolsak, is that the verse directly attends this unstable time as the real one, the real real time, as it were—a concrete actual forward-moving open time. A created time that is actual, actually the case, inside reading. The emphasis is not on the created object that may come to hang constant in the gallery of hierarchizing attention, but on things hanging in the air in listening space—blowing with the breeze, following the breath.

In an October 2000 interview with Pete Smith, included in this volume, the interviewer suggests that there was “no Lissa Wolsak until 1994,” the publication date for The Garcia Family Co-Mercy, her first book. It turns out that Wolsak began some magazine publications in 1990, and that her writing perhaps began with notebooks first seen by Olson scholar Ralph Maud, who read them in 1988 and urged Wolsak to do something with them. Wolsak says that she has “a romantic notion of deepening a work, oaking it.” As she discusses in a November 2002 interview with Tom Beckett, her first book came from notebook materials accrued over ten years. Her own descriptions of her working process tend to be as jumpy and energized as the work itself: “The works are stochastic meltdowns, entelechies in provision of a frontier for my sake, to accelerate my looking, divvied in imaginal, partial pre-verbal milieu, necessarily outside agreed-upon-motif-value. In contradiction, syncope, they are sometime scherzi, jumpy surrealisms, bricoleurity et al, directed toward synesthesia.”

Wolsak came to poetry by means of many other activities. As she says in the interview with Smith, she had already been a “mother, adventuress, beekeeper, volunteer friend to imprisoned people, volunteer friend and bridge for severely challenged persons, surgical nurse, hotelier, impresario, and recently free-lance artisan of ikebana, and a goldsmith.” I note Wolsak’s background—born in 1947, she grew up in southern California, never went to college, and moved to Canada in 1969—because I think that an under-recognized quality of the current American innovative poetry is its self-taught quality. (Think, for example, of Susan Howe, Charles Bernstein, Jack Foley, and Ron Silliman, to name just a few. There are considerable affinities with “outsider art,” art forms not dependent upon learning a particular credentialed craft, though the artists tend to be quite knowledgeable and well-schooled, autodidactically.) In an interview with Kent Johnson, Wolsak describes herself as “ignorant of any but a few literary techniques because what I am after is unguided, ungovernable, autocatalytic.” Her originality does not come from the void, however; in fact, Wolsak’s first purchased book of poetry was Zukofsky’s “A”, and she acknowledges Stein, Olson, Susan Howe, Beckett, and Celan as important to her, as well as the work of Douglas Oliver, Alice Notley, and Allen Fisher, among others.

But there is a quirky, fresh nature to Wolsak’s work, and perhaps it stems as much from her precise work as a metalsmith. In conversation with Johnson, when asked about the link between her metal work and her poetry, she explains,

I have no formal education in either of these fields and learn through experimenting, looking and reading, doing. Both teach me to remove mystique, and to really look at what I am looking at. Both are architectonic, autonomous. I’m intoxicated by fire, light, traveling through color, integrity of materials and making something where there was nothing. In both, I dead-reckon, and proceed by listening to mercurial materials. I love the overpowering silence involved.

In An Heuristic Prolusion, Wolsak writes, “To be absorbed, and to wake. These are my methods.” Her writing, then, becomes a kind of phenomenology of spiritual experience, at times

being     as in union or rapture

In an important sense, Wolsak’s mysticism is in keeping with Heidegger’s insistence on a reinvestigation of the nature of being. Wolsak writes, “next...some of them took / away the word / Is,” and her writing, which might be described as “standing up to our / necks in intuitive / torrents in / here-ness,” acts as a kind of refresher course, a writing that schools us in developing a feeling for being and time. It places us where “things bind in their marveling / fire is swung as / ipseity and light” and asks, “whose bis- / muthous chain of / globes are we ten- / anting?”

Wolsak describes her work as “a vulnerable defence of being”; the poems exist “pre-positionally through, of, with, the space between atoms, space less tyrannized,” and the careful spacing of the poems constitutes a “visual hearing,” a cultivated (and transmitted) synaesthesia. Wolsak reports, “I choose, rather, to activate consciousness, and to keep a loose hold . . . but not to exclude the genuinely intended or navigable. I am more a receiver of shape and form than an architect of same.”

Levinas—who, due to his insistence on an ethical dimension to being by means of our relationship to the other, ultimately proves to be a more congenial partner for Wolsak than Heidegger—writes of “the spontaneity of understanding” and suggests that “the said is not added on to a preexisting knowing, but is the most profound activity of knowing, its very symbolism.” That is precisely where Wolsak’s writing exists: as a symbolic enactment of a threshold kind of knowing. Her poetry gets to the crux (or the empty, enabling hub) by a complex mixture of will, research, placement, and release of control. It constitutes a primer for living on the threshold, for being in a tenuous currency; the poems become richly textured halting experiences that often evade memory, and thus ask of a reader an instructive release of control. Wolsak’s poetry is a pure expenditure (it is not and does not think of itself as an investment)—an urgent, argent writing that earns and accrues interest. In A Defence of Being, Second Ana, Wolsak asks,

the said things intrude upon us now?

being scient is of

Wolsak speaks of writing “toward the equivocation of ethical spaces which well between intent and interpretation.” I would suggest that she also writes toward a “pure,” fresh, refreshing instance and instant of being, finding an interstice, an open space, apart from and resistant to the bombardment of verbal over-determination that characterizes our hyper-saturated and polluted “information” age.

At the end of An Heuristic Prolusion, Wolsak asserts, “For me, the urgent question is .. ‘do we have a prayer?’” Her writing is a finding and making of that prayer, a petitioning, a song, an architecture, and a warning; it is a contagious and instructive dwelling and playing with the resources of our languages and their spatial projections.

Wolsak’s work, though it feels like it came suddenly out of nowhere—her first book did not arrive until she was in her late forties (and we should remember that there are other important instances of great poets late arriving into the book-publishing world, including Wallace Stevens and Robert Frost—a model very much at odds with today’s quest for rapid, repeated book publications by young writers)—has many important kinships. Reading Wolsak today, in retrospect, her connections to the work of Susan Howe, Jake Berry, Zukofsky, Arakawa and Gins, and many others are evident (even though Wolsak’s in-depth reading of most of these writers took place after nearly all of the Collected Poems had been completed). Let me pursue one of these kinships. Like Arakawa and Gins, Wolsak in her poetry asks, what are we, and can we learn to feel ourselves assembling our perceived world? And, might we learn ways to assemble it differently, with greater mercy and justice? Thus, we find Wolsak writing about “when precisian pinkie-men distend / in perfecting directives, / point me in the dust, / stream back / from it upon us.” Perhaps her own quest, linked to the openness and frequent openings of the poems, is to

to lie before us

by utile, I mean

far from brevity of hemi—

Wolsak’s poetry, like the work of Arakawa and Gins (especially in Architectural Body), amounts to an “autopoesis / of thingly beams.” Thus, like the best of philosophy and science fiction, Wolsak’s poetry thinks not at the level of personal psychology and the (merely) self-expressive, but at the level of the species, asking fundamental questions of what constitutes and will become of the human.

As for Wolsak’s asking whether we have a prayer, her writing takes us in that direction, as she writes to “the genius Peace, to/ whom the olive is dear” and as she seeks “some / depth of mercy.” Whether staring afar or a-near, Wolsak’s poetry moves us and touches us: “Beyond...on a convex... / attingent squeezed light, / what-is touches what-is.” Though, as I have suggested, there will always be an infinite number of ways to read and talk about Wolsak’s writing, now, is a good time for many more readers to begin.