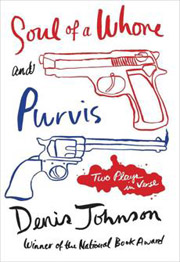 Prior to the publication of Soul of a Whore and Purvis, Denis Johnson fielded a question at a reading I happened to attend. The questioner asked if Mr. Johnson ever felt like returning to poetry—his first three publications were collections, and he published two more before moving more exclusively into the world of prose. I remember him answering, “Actually, my next book is a collection of plays in verse.” He then laughed and admitted, “That might be the worst pitch for a book of all time.”

Soul of a Whore and Purvis were each written during Johnson’s stint as the resident playwright at Campo Santo for San Francisco’s Intersection for the Arts in the early 2000s. Soul of a Whorepremiered in 2003; Purvis in 2006. Which is to say that these are plays, through and through. And drama in verse is nothing new (Shakespeare, anyone?). But Johnson’s response to the question above confirms that, in the author’s mind, these are also just as legitimately works of poetry—a form of which just happens to be designed for stage production.

Like Shakespeare, Johnson’s meter of choice is blank verse. In many ways, these plays can be read as experiments in form, and the results are evident from the start. Early in Soul of a Whore, reformed faith healer and profiteer Bill Jenks pumps out a quatrain of impeccable unrhymed iambic pentameter:

I ain’t the quickest rabbit in the pack,
I guess the record proves that much, but, God,
I hope to Christ by now I’ve learned enough
To leave that Holy Spirit shit alone.

Not every example of Johnson’s meter is this spotless, and the clarity and precision of the iambs here helps to drive the speaker’s point home: he is on the straight and narrow, he is reformed, he is hoping to be accepted as legitimate. Also apparent is that regardless of genre, Denis Johnson is still Denis Johnson—we’re in familiar thematic waters despite any formal rigidity. InSoul of a Whore alone, we see prominent roles for Greyhound bus terminals and capital punishment (recalling Johnson’s debut novel Angels), communing with spirits and demons (touched upon in 1997’s Already Dead), and of course, down-and-out characters who undervalue their own lives yet render the entire experience of existence as something miraculous and profound (everything the author has written).

In Purvis, the second of the two plays, the similarities to his oeuvre run thinner, but still hum when plucked. The story revolves around the titular Melvin Purvis, the famous G-man of the Hoover era. It reads as a work of historical fiction, and Hoover himself is the star of the show. Structured in seven acts that run in reverse chronological order, the plot reveals how Hoover’s peculiarities affected Purvis’s career—and, more broadly, American life in the 20th century. In its devotion to the mysterious political and bureaucratic arenas, the work relates a bit to Johnson’s National Book Award-winning Tree of Smoke (2007). But whereas his novel is a dense, epic, and deeply felt treatment of psychological uncertainty, Purvis is overtly irreverent, with sequences that hinge on absurdity, and at times the hilarity can become a bit obtuse. In all, it is one of Johnson’s best works to date. It has little in common with Soul of a Whore, however, beyond the two plays’ shared commitment to blank verse.

While Purvis develops relatively new terrain for Johnson, Soul of a Whore resumes the dramatic universe he introduced in 2002 with Shoppers, which consisting of the plays Hellhound on My Trail and Shoppers Carried by Escalators into the Flames. These two, along with Soul of a Whore, follow various members of the troubled Cassandra family, which functions across works similarly to J.D. Salinger’s Glass family. For instance, in Soul of a Whore, a character is about to be executed for a crime committed in Shoppers Carried by Escalators into the Flames, and a character tertiary to the plot of Hellhound on My Trail plays a central role in the newly published work. Taken together, these three plays make a more complete and fulfilling arc than can be found in any of the plays in isolation.

This continuity illuminates the central critical dilemma facing Soul of a Whore and Purvis: this larger narrative functions much like a novel would, but these recent contributions are written in verse and demand to be dealt with poetically: likewise, they are undeniably penned for the stage, and have been performed on a stage, and therefore must be read not only as narratives and poems, but also as performance pieces. Johnson is determined, it appears, to confound any generic reading of this work.

Taken simply as plays, the work often refuses to cooperate. Time and again, Johnson poses challenges to potential actors and directors. At one point, a character returns to the stage after several scenes in the wings with longer hair and a beard. Purvis begins with a textual list of pertinent dates and events, providing context without which an audience would be utterly lost as the play unfolds. Perhaps the most pointed artistic statement in the book occurs with Johnson’s stage directions in the closing moments of Purvis’s fifth act, wherein Herbert Hoover fires Melvin Purvis for being, in essence, too good at his job:

Silhouetted in a purple light,
To the rhythms of a sexual, melting jazz
Composed in an exotic scale,

HOOVER enacts a private rite, making
Supplication to the numina
Who animate his trembling desires.

PURVIS looks on, utterly motionless.
And while the light transforms itself around him,
He, despite the onslaught of these powers,
Undergoes, himself, no transformation.

This is the first and only stage direction in the book to involve line breaks. The first line in particular, with its metrical implications, suggests a spillover from the world the author has created (the dialogue in verse) with the world in which he is creating (stage directions written for the performers). And then there is simply the language: how is a director to interpret “supplication to the numina?” In a sense, these stage directions read like a profound and perfect explication of Soul of a Whore and Purvis in sum: they are the whims of a talent unbound by the limitations of genre.