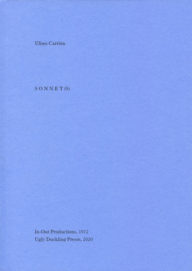 Widely recognized as a source of what is now discussed loosely as the “artist book” movement, the Mexico-born, gay conceptual artist, thinker, and theorist Ulises Carrión first published the pieces contained in Sonnet(s) just prior to the twelve-issue run of his now-famous Ephemera magazine. Counter-intuitively, it’s actually not useful to discuss here the sonnets themselves, which begin with “BORROWED SONNET” and range from “EXPLICIT SONNET” to “PROSE SONNET” and so on. Part of the aspiration of Carrión’s artistic practice was a kind of “appropriation art,” which emerged out of collage and its practice of drawing directly from the lived, visual culture. It came to find greater notoriety in New York in the early 1980’s among artists such as Sherrie Levine, who appropriated many male artist’s works to powerful and important feminist effect.

In one work included here, Carrión appropriated the 1871 sonnet “Heart’s Compass,” by Dante Gabriel Rossetti, and broke down the love poem into forty-four reimagined versions. In fact, it’s a bit of a misnomer to call it “appropriation”—Carrión intentionally left out any citation of Rossetti in the original chapbook, with the aim of committing outright plagiarism. Of course, as pointed out in Annette Gilbert’s essay in this collection, this is also an attempt to liberate himself and his artistic practice “from the excess of what is already existing.” Still, as a former philosophy student, it is likely the poet-artist was reading the same texts as those who eventually came to influence appropriation in the 1980s.

The sonnets here emerge from Carrión’s foundational move away from traditionalist narrative structure as insufficiently capable of providing space for his experiments, representing, in fact, a “rejection of linear language.” This accounts for a sense of the novel and other similar approaches to publication as contexts defined by a too-narrow use of books for “’utilitarian purposes’ and ‘commercial value,’” the rejection of which allowed Carrión to push forward into the polysemies of language “as a means to forge a community.”

These sonnets-as-vessels serve as “bookwork,” a portmanteau Carrión used to describe his effort to step outside of linearity into the materiality of the things language is used to describe. Semioticians might have described this as signifier and signified, but this would be an insufficient descriptor of the context in which these language acts take place. In that sense, the concept of “Materialzärtlichkeit,” referred to frequently in the back matter essays, and which the essayists in general seem to agree on, is also usefully traced to French Symbolist Mallarmé as “the ultimate point of reference and key figure for the ‘bibliographic version of site-specific art.’”

In this important republication, we are reminded that part of Carrión’s posthumous reception rests on this lineage and his rejection of originality in a way that was critical to activating artistic “networks outside institutional frameworks.” Through it, his efforts to engage community building around the expansive notions of what a bookwork could become have cemented his place in the history of a now continuously-emergent publishing avant-garde.