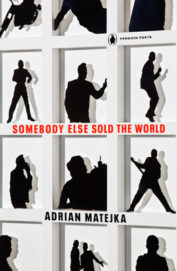 The title of Adrian Matejka’s latest collection of poetry, Somebody Else Sold the World, echoes David Bowie’s smash single “The Man Who Sold the World”; amazingly, the 1970 chart-topper was based, in part, on a scarcely known poem called “Antigonish” that was written for a play in 1899 by the educator and poet Hughes Mearns. Bowie used the mellifluous, catchy, eerie limerick as inspiration for his song, and Matejka has now used that song to inform his new, robustly lyrical collection of poetry. In other words, we’ve come full circle.

At the outset of this fifth collection in his poetic ascendency, Matejka introduces a concept that spreads across the five sections of the work: “the antagonists.” In the first of several poems titled “Somebody Else Sold the World,” he touches on the uniquely American polarization that has only been exacerbated by the COVID-19 pandemic: “So the antagonists cornered / the curfews, manufacturing arguments / with guns at the ready like henchmen.” Matejka never addresses the antagonists by a more specific name, but with their “vanity tans,” “flag colors,” and “whistled jingles / about liberties & wars,” it’s not difficult to narrow it down. The antagonists do and say whatever they can to push racism, wealth inequality, empty alliances, and corrupt systems. We have all recently lived through a year marked by sickness and suffering, but rather than cast it off as a fluke, Matejka suggests that the majority of us have just finally begun to witness our world’s antagonism without its thin, obscuring veil of prosperity. The question now is whether we will allow that antagonism to retain its grip on our society, or if we will resort to revolution with “the air around us . . . so ripe.”

What do we do when we live in a world that someone in power operates against our interests? How do we confront the uncontrollable? That brand of hopelessness can be completely untethering, but Matejka’s greatest strength in Somebody Else Sold the World is his ability to cut tragedies and instances of violence with simple, momentary pleasures—the bright flecks of life. He does so via structure, content, and form, strategically varying the poems to include love notes, odes to his young daughter, meditations on various fetishes, and references to pop culture icons like Frank Ocean, Blood Orange, and Travis Scott. It seems that even through the most confusing losses and challenging heartbreaks, Matejlka wants us to believe that we’ll “be absolutely fine / . . . / like a big breath exhaled / through the smart part of a question mark.”

The five-part poem “Bullet Points” is a testament to Somebody Else Sold the World’s mission to deconstruct violence with understanding and care. Matejka writes a poem for each of the physical components that make up a bullet and lists alternate uses (and thus alternate futures) for their materials, steeping an otherwise destructive object in brief moments of nostalgia and possibility. Language, after all, can be a precursor to violence or a tool for its de-escalation: “Poetry, like gunpowder / was first used to light up // the sky with every color,” he writes. Today, the gun is a symbol of total and often unchecked power. It’s a technology that is “always more / important than the people / in front of it.” As we carefully take apart the gun in “Bullet Parts,” we’re challenged to leave it like that—permanently disassembled—to prioritize the communities that suffer because of it.

One of the attributes that most sets Somebody Else Sold the World apart from Matejka’s previous collections is its substitution of music for narrative. The work plays like a ballad written in the wake of insurmountable loss—both harrowing and dizzying—and yet it remains utterly grateful. Music in its purest, unrecorded configuration is fleeting, and this sense of ephemera underscores the collection’s focus on presence over plot. Sometimes, all we can do is savor pleasures in the exact moments we experience them, and savor them Matejka does. He injects his poems with octaves, instruments, and mezzanines while incorporating quotes from modern musicians, often using pop songs, to set his course. Even the “Notes” section in the back of the collection serves as a double entendre, since the inspirations listed in it are derived from various songs and albums. The result is a stunning reimagination of musical capacity that Matejka uses to navigate love, heartache, and uncertainty: “I had a trumpet shaped / like a downward heart / & I played it recklessly.”

Even more undeniable than the collection’s timely subject matter is Matejka’s formal talent, which has only grown over the years. The imagery he cultivates and nourishes alone should serve as reason enough to read the book, with its “lipstick all over the place / like the afterthought a comet leaves,” its “boathouse / of quotations,” its “Copper profiles lost // in the cushions . . . / & worth almost  // me.” Each is a further demonstration of Matejka’s re-envisioning of futures and his ability to turn what we think we know—especially about language—on its head. He examines all the moments, exceptional and minute, that occur during times of unrest and in the shadow of antagonism. With this collection, he proves that it’s possible to nurture the bristly love that pushes through cracks in the pavement when we least expect it.

The last poem in the collection is titled, “Where to Begin.” That question (and statement) has reverberated through many minds in recent months as we continue building a collective vacuum of internal and external noise that threatens to burst at any moment. Somebody Else Sold the World is an excellent resource for figuring out how to exist during times that are “as hard-pressed / & tremulous as us.” It coaxes us to notice those tectonic melodies that infiltrate everything around, behind, and in front of us, but especially the rhythm of silence—the place where you might hear yourself the most.