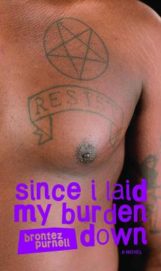 For as long as there have been small towns and big cities, men and women of a queer inclination have made whatever excuses they could to move from the former to the latter in pursuit of who they knew themselves to be and who they sought to love. In Brontez Purnell’s Since I Laid My Burden Down, DeShawn escapes his hometown to San Francisco to become the self-declared slut he wants to be. The death of his uncle drags him right back to his starting point, however, and he begins to confront the lives and loves that have shaped and scarred him.

The style of the novel is ambitious in its unconventionality. DeShawn’s time back in his hometown after years away is charged, chapter after chapter, by the memories of his origins as an adult. Narration springs back and forth between the immediacy of the past and the subjective ambiguity of the present. Even the most casual encounters with family and neighbors are laced with meaning as he revisits the struggles between his teenage self and sexuality and the environment in which he was forced to acclimate.

Most of those struggles are with men, in any number of roles. Burden is a text ultimately concerned with how one’s masculinity is shaped by the presence and absence of other masculinities. From the prologue, when DeShawn is informed of his uncle’s passing, DeShawn is driven to remember the men who shaped his life, and how they left him. There are deaths and abandonments, from absent fathers to Kurt Cobain. In some way or another, the men in his life are defined by their departure. What they left behind in DeShawn’s life was, ultimately, DeShawn.

In one scene, while babysitting his young nephew outside, DeShawn recalls his adventures in the bathhouses of San Francisco. There are the fears and excitement of his first time, and shades of mortality as he reflects on some of the older patrons. The cry of his nephew, stung by a bee, yanks him back into the immediate, right as he begins to raise the question of just what love is. Attending to the boy’s pain with salve and affection, DeShawn becomes a male figure in another boy’s life who will, in some way or another, leave him in turn.

An artist of many talents, from writing to dance, Purnell shows in his debut novel a strong control of language coupled with a willingness to take risks. It’s a book that can sit comfortably next to Mairead Case’s 2015 debut, See You In The Morning, while resonating with some of the themes and ideas of Samuel R. Delany’s later novels. It is, first and foremost, a work of storytelling; DeShawn comes to life in Purnell’s narrative voice. The worlds of small-town Alabama, where everyone knows everyone, and the callipygian labyrinth of San Francisco coexist as one world within the story. Beginning in death and memory, and ending in revelation and healing, Brontez Purnell’s debut novel is a whirlwind journey for both its protagonist and the reader.