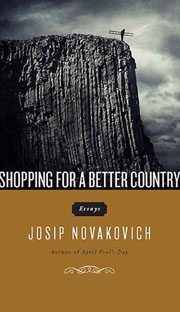 I have a giant globe I inherited from my grandparents. My grandfather had it made in the 1960s, arresting its color-coded boundaries at the height of the Cold War. Much of its Northern Hemisphere is awash in pink, marking out the Soviet Union and providing a visual aid for the suppression of ethnicities that would later erupt in the wake of perestroika. Yugoslavia, which was puzzled together from the ruins of World War II, later splintered along ethnic lines in a bloody upheaval that seemed to personify the politics of the 1990s.

Alienation can offer rich fodder for expatriate writing, which taps a longing for a place out of reach, often a place accessible only in memory. The most predominate sentiment expressed by the writer Josip Novakovich in his collection of essays, Shopping for a Better Country, is a sense of loss—not only for a disappeared homeland but also for the country he adopted. Novakovich immigrated to the United States as a transfer student to Vassar College in 1976 and stayed on to study religion and philosophy at Yale University. He received a doctorate and considered returning, chafed by the patriotism and nationalism of his U.S. friends. “In our socialist education, nationalism was equated not only with the bourgeoisie but also with Nazism, and Croatian nationalists, invariably with Ustashas, the Croatian fascists who committed many atrocities in the Second World War,” he writes in the title essay. But the bloodshed that followed strongman Josip Tito’s death prompted Novakovich to remain as a “voluntary exile.”

The essays here are reprinted from various literary journals, and originally appeared from the early 1990s through 2011. In them, Novakovich reveals a complex permutation of identities. He was raised Baptist in secular Yugoslavia, whose main, though suppressed, religions were Catholicism, Eastern Orthodox Judaism, or Islam. He speaks fluent German though he says in Germany he felt like a second-class citizen: “For Germans, Croats and Serbs were mostly cheap labor, despicable lower-class trash.” A naturalized American citizen during the post 9-11 era, he finds himself further alienated by the rise of jingoism. He grows so disenchanted with U.S. conservatism and militarism that he decides to move to Canada, where he again finds himself an outsider.

The texts are also interspersed with personal stories describing visits to his ailing mother in Zagreb and eventually her funeral—stories that reveal a landscape of childhood memories and the changing topography of his homeland. He shares recognizable struggles in the existential guesswork of parenting, the strain of traveling with toddlers, and problems of getting artifacts and instruments through customs. There are missives from journals that were not initially intended for publication, a short essay about his botched attempt to write erotica, and a travelogue from a trip to northern Africa in 1969 published here for the first time.

Some entries feel raw, as when Novakovich learns about Ruth’s funeral:

Oh, shit, what to do? To pull out my son from his classes, and fly? But I hate funerals, they are either morbid and depressing, or duplicitously uplifting. I had just been to a memorial which was presented as the happiest occasion on earth, with lots of smiles and laughs, and I didn’t believe the mood. It was a Prozac memorial. Well, maybe it wasn’t, maybe the spirit was really so uplifting.

Yet Novakovich has a knack for presenting profound insights without calling attention to them. His own father died when he was eleven, which leaves his parenting template somewhat unfinished on fathering his two American children, especially his son. “He can’t stand it if I win at ping-pong or chess. I tell him, what would you like me to be, a loser? I played this game for thirty years and you for thirty days and you already want to beat me?” He relented, however, letting his son win at soccer (otherwise, the boy would cry and quit). When he let the boys at his son’s school beat him, though, his son cried again. “He had just lost the image of an invincible father, and that shook him up. Of course, that he could score against me would make him the best player, and my letting others score not only devalued my image but also his.”

Other essays tap into an anxiety of an expat who is seeing his country reborn as an international tourist destination. “I got used to treating Croatia as some kind of burden—so when people asked me about where to travel in the Balkans, I usually advised them to go to Slovenia and Greece. And then, suddenly, Croatia became tourist destination number one for the Lonely Planet and many tourist journals,” he writes. In contrast to the United States, which loses its luster under the Bush Administration. A Russian linguistics professor he meets is aghast that he has chosen America over Croatia.

She looked at me as if I was a madman. I was struck—first my relatives seemed to be crazy for not leaving Croatia, and now I am crazy for not living in Croatia.
I was sunk in gloom for the rest of the day, thinking maybe I had spent most of my life in the wrong place.
What a difference ten years make!

English is not Novakovich’s first or second language, yet it is his writing tongue. His prose is direct and dry, which incidentally matches the voice in his 2004 novel, April Fool's Day (Harper Perennial, 2006), reminiscent (at least in substance) of Milan Kundera, another expat who explores the nexus of repression under the Soviet legacy. However, Shopping for a Better Country veers closer to political manifesto. References to Bush-era politics might feel dated in 2013, even though some of the essays are updated with postscripts.

Novakovich, who was recently named a finalist for the Man Booker Prize, posted in January on Facebook that he had finally been granted Canadian citizenship, all of which seems to bring this project full circle. That suggests the timing for such a collection could be just right.