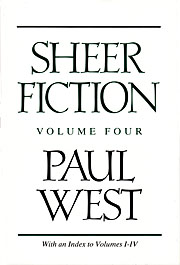 Paul West (b. 1930) is the author of over three dozen novels and nonfiction works, including Rat Man of Paris, a fictionalized account of a Parisian eccentric traumatized by the Nazis, and The Shadow Factory, a recent memoir about his battle with aphasia after a stroke. This recent work—the final volume in a series of essays and reviews on writing and writers, one rich in allusions drawn from astronomy, air flight, and etymology—is a genuine delight to read, while at the same time an exercise in peering into the darkening night of a stylist from another time and sensibility.

Having said that, I ought to clarify that West is completely unlike that very English English professor everyone had whose classes were interminable, the drabness broken now and then by whistled arias to illustrate some dry point taken from notes yellowed with age and home to earwigs. Here is a fair example of West in full stride:

If you fix one eye on Faulkner and the other on Melville, and you remember some of what Keats said about negative capability, you can just about manage to commit the delectable autonomy known as writing for its own sake—for the glory, the rebirth, the illusion of doing what nobody has ever done before. There’s nothing more unassailable than that, even as things fall apart around you and you see the fruitflies ascending to power without composing so much as a paragraph. Vary the image a bit, amassing the bestiary of the foul, and you can add Zola’s toad of disgust, which he said you have to swallow every morning before getting on with the work. Swallow it, note the hegemony of the fruitflies, and indeed the demise of yet another noble unicorn gone to roost in Paris or now plying trade on Wall Street, and you then become clear enough to write for the next few hours as if the world were waiting for your sun to rise and would do nothing serious without you. That’s the feeling, the pumped-up, inspired elation that lofts you—me—from novel to novel even while the tweetie-pies of Stodge College, Oxbridge cough up some dark perilous matter and plaster it into their album of envious sorrow.

No apologies or hedging about there when it comes to the joy of writing, or, more to the point, its importance. In this he differs from many in his adopted land, as he declared in “The Shapelessness of Things to Come,” from the first volume, that art is “a word that few American novelists care to use about what they do, as if art were a somehow retrograde thing, somewhere between lunacy and impetigo.”

The four volumes of Sheer Fiction (from 1988, 1991, 1994, and 2007) total roughly 800 pages, with an index at the end of the fourth volume, and comprise the equivalent of a master class in the appreciation of reading others and the hard-won joy in writing one’s own works. Essays in this volume cover, among other subjects, J. M. Coetzee (and his mischievous use of West as a character in his recent novel Elizabeth Costello), Borges and West in conversation, Beckett (West has a marked preference for the novels over the plays), poetry about the Titanic, Faulkner, words, the use of history and deviating from it when writing novels (as West has done), and much on the importance of the novel.

What keeps a reader immersed is the combination of style, ideas, and West’s fervent readiness to talk about literature meaningfully and deeply, without being precious or narcissistically overindulgent. In “Backlash Against the Novel” there are spine-stiffening lines for those who may be drooping over their desks: “the novel, fiction, style should be seen to evolve, as black hole theory or the pacemaker has evolved, maybe not en route to perfection, but in its own punctuated evolution . . . intermittently improving. A meliorist’s approach? Yes, but, more than that, a view that hates stagnation.” The writers that have helped the novel evolve include Julio Cortázar, Carlos Fuentes, Vladimir Nabokov, Witold Gombrowicz, John Hawkes, Blaise Cendrars, Primo Levi, David Markson, and W. G. Sebald. Someone who thinks the novel must evolve won’t have a high regard for mock-Victorian works, minimalist works, Tom Wolfe, and most of the fiction that lies inert, almost an insult against intelligence and aesthetic discrimination, inside the pages of the New Yorker and occasionally the Atlantic. West is firm about this pursuit. “So, when you consider the writing of fiction, you are not only saying, ‘Test it against the stars,’ you are inspecting the very purpose of sitting down to cast an observation in language, which is in a sense to misrepresent it, change its appearance conceptually.”

It’s daunting, and an act of responsibility, and opening oneself to judgment, to test what you write “against the stars”—against those who have come before. West admires the first line from Beckett’s Murphy as saying something perfectly: “The sun shown, having no alternative, on the nothing new.” A real writer “starts peering into the bowels of language, mimesis, model theory, in the interests of a praiseworthy match: word to thing. It doesn’t always work, and half-decent words will often carry the day when, with a little more sweat, a superior set would have won the palm . . .” We’ve all read fiction that seemed to issue forth from a forge, hammered out by starvelings of literature disdainful of adjectives and scornful or fearful of adverbs, unwilling to stretch syntax or send the gentlest ripple across the stylistic pool, hoping their caution will land them an academic post, if not create a best seller. West will have none of that; he’s an advocate for a style that has a definite personality or character. Parsimonious, colorless sentences are anathema to him, and he has many different and biting opinions on the paucity of the language used by today’s novelists.

Often, those who press against the boundaries find their books shunted to the side, not discreetly—no one’s paying attention except the affected and a few interested parties—but obviously. “Thus, after the fashion of the Soviet Encyclopedia, certain people get unpersoned,” West writes in “Of Morrow and Tomorrow,” an essay on Bradford Morrow. “The nation stands between the partial menace of cliquism and the total scandal of a retreat from imagination, from style, from the fastidious. When everything, because that’s the way the nation wants it, turns into entertainment, nothing meritorious is going to survive, not with illiteracy being promoted full-time in the schools.”

West is an inspiring artist who reminds one, through his driven, incessant (and at times, over four volumes, slightly repetitive) visits and revisits to those writers who matter to him, that writing is a calling, a force, faced with hazards that extend from the “gestapo of the plain prose party” to giant corporate publishing entities. “When the semi-literates have organized themselves even more thoroughly than they already have at the publishing houses and the magazines, phrasemakers such as I will be the first to go, and a small platoon we will be, disdained by book editors who cannot spell and magazine editors who equate literature with gossip or the facetious.”

Many will see that, and much else, as the complaint of an old man, no different from others who say that today’s athletes aren’t as good as they were way back when. The best way to rebut West is to read him, take in what he is looking for, and respond at length. Perhaps some young novelist could become riled and write a book of essays to nail their colors to a mast. If someone else’s shirt or skin gets pinned, so much the better for a conversation about what literature really means to people.

In his introduction to this volume, West writes that “the people running the book trade” consider the essay “anathema, the book of essays space poison.” Thanks, then, to McPherson & Company, whose editors have had faith in these four volumes of invigorating, purposeful, and rambunctious prose prods. This is a handsome set every adventurous writer will delight in.

Click here to purchase this book directly from the publisher