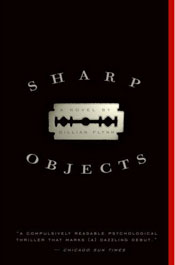 Gillian Flynn has an uncanny command of place, recognizing how the mood of a whole town can be conveyed in watery mashed potatoes dyed red by their proximity, on the plate, to a slab of jello. The gritty particulars of the small southern Missouri town that is the setting for Sharp Objects provide more than enough horror for the whole novel, even if there were not a killer on the loose mutilating young girls. Indeed, the gaping, destroyed faces of those girls offer a sort of portrait of the town: obsessed with starched-collar social facades and sweet drinks on verandas, but grotesque just under the surface—claustrophobic, catty, equal parts Victorian Gothic and reckless Americana, laced with crystal meth, peppered with razory teenage sexpots, and reeking from the industrial pig slaughterhouse at the outskirts.

Flynn’s most remarkable gift is that she knows what’s really scary. While we may lock our doors at night to keep out creepers and lunatics, it’s the excruciation of our childhoods and adolescences, our own narrow or failed escapes from parents and roots that haunt the deepest levels of our dreams.

Camille Preaker is our stand-in here, a hometown girl turned big-city journalist, sent back on assignment to investigate the crimes. Chugging bourbon then crunching fistfuls of wintergreen mints to mask the fumes, Camille struggles just to maintain, in exile with her monstrous mother and her thirteen-year-old half sister who alternates between playing with a doll-size replica of the house in which she lives to reigning as clique queen, pretty and predatory. In this book, blood in the sense of blood kin is far, far worse than the liquid that comes out of bodies, but there are gallons of those substances, too. Sex and violence are both manifestations of power, which is what all the nastier characters here want to have. The teenage girl, with precocious cunning, is figuring out these mysteries. Camille, for her part, remembers being much younger, discovering a shack in the woods used by hunters, thick with evidence of sinister connections:

Ribbons of moist, pink flesh dangled from strings, waiting to be dried for jerky. The dirt floor was rusted with blood. The walls were covered with photographs of naked women. Some of the girls were spreading themselves wide, others were being held down and penetrated. One woman was tied up, her eyes glazed, breasts stretched and veined like grapes, as a man took her from behind. I could smell them all in the thick, gory air.

At home that night, I slipped a finger under my panties and masturbated for the first time, panting and sick.

While Flynn’s story propels itself at breakneck pace, the language is luscious, disquietingly addictive. At times, reading this book is like tonguing a loose tooth; at others, it’s like fleeing a drunken hit-and-run with a clump of hair under your windshield wiper blade. No one is innocent in Flynn’s world, and those who manage to survive don’t do so without exertion.

Camille, for instance, has this technique: at thirteen she carved the word wicked into the flesh of her hip. She started letting others do things with her body, too, but it’s the wormy scar-tissue words that remain. Nearly every inch of her skin, just shy of wrists and ankles and neckline, writhe with them: bitch, whore, queasy, punish, favorite. She carries her own adjectives, her own set of myths: “They are often feminine, in a Dick and Jane, pink vs. puppy dog tails sort of way. Or they’re flat-out negative. Number of synonyms for anxious carved in my skin: eleven.” Staying in her childhood bedroom is enough to make her itch for a blade's edge. She jiggles the padlocked door of the cutlery drawer.

Flynn’s genius here is in using spectacular horror to cut closer to the bone of the banal, the shared. There’s a scene in a fitting room that’s painful to read because it is so perfectly true. Camille stifles her scream with a wadded dress, and we, as readers, want to scream along but know that the scream would come out silent, as in a nightmare. With tourniquet-tight construction and barbed prose, this is a deeply disturbing and instantly re-readable book.