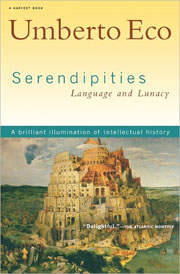 Umberto Eco has become famous in the U.S. for his fiction-his novel The Name of the Rose spent months on best-seller lists and was eventually made into a Hollywood movie. At the same time, he is well-known in academic circles for his work in linguistics and history, and has for many years held a post as Professor of Semantics at the University of Bologna. Eco's present volume of essays, Serendipities, is aimed at both academic and popular audiences, collecting five lectures he has given in recent years on language, culture, and what Eco calls "the language of the lunatic."

Serendipities examines the historical search for a perfect language an ur-language that accurately reflects the natural world. Eco delineate a path through Christian thought, from the early belief that ancient Hebre was the language closest to perfection, to the surprising belief (for Medieval Christian thinkers) that Chinese was the ideal, pre-Babel language. This idea was perpetuated by Leibnitz, who saw reflections of binary calculus, itself held as a reflection of God, in the I-Ching. Along the way, Eco considers the study of Egyptian hieroglyphics, the Cabala, Saussure, and Dante (who believed his own Italian vernacular to be of direct lineage to the language of Adam). Eco's primary aim is to undermine the very idea of linguistic perfection, and to show how language can be used to graft false or illogical relationships onto unfamiliar experience.

In tracing language and its interaction with culture, Eco establishes a concurrent theme: instances in which explicit mistakes have led to unanticipated findings. Columbus's attempt to reach the East was inspired by a miscalculation in the Earth's size; likewise, much human endeavor has been motivated by misguided premises. For example, medieval tradition convinced Europeans of the existence of the unicorn. Marco Polo, while traveling in Java, saw large gray animals with a single horn on their muzzles. Because an entire tradition taught him to find unicorns, he was unable to see the animals for what they truly were: the lowly rhinoceros. Eco argues that the process of how we perceive language-and therefore the world-is strongly conditioned by our subjective and idiosyncratic assumptions about the world. When Leibnitz found a language of Boolean purity in the I-Ching, or when Marco Polo discovered unicorns, they were essentially projecting their own familiar world onto the strange. The danger, Eco concludes, lies not in our methods of interpreting culture, but instead in our belief that our perceptions are absolute and universal

Eco's approach is in some ways similar to that of the medieval philosophers who are so often his subjects. Undeniably erudite, he is also undeniably haphazard. Veering from Egyptology to Columbus to Chinese history within the space of a few pages, Eco stitches together a meandering narrative that will leave more linear-thinking historians howling. Nonetheless, his obscure examples and references are interesting in their own right, and his prose-sly and genial throughout-replaces logical rigor with a sense of play often missing in the study of history.