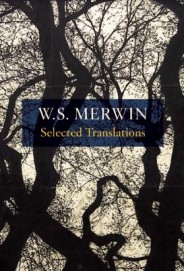 Justly famed as a poet, W.S. Merwin is also unparalleled in his reach as a translator of poetry into English. The index of his Selected Translations is a remarkable document in itself, listing thirty-three different languages from every continent, including Crow, Kabylia, Malgache, Occitan, Tzeltal, and Tzotzil, and of course, all the major European and Asian languages.

While there have been two earlier additions of this book, from 1968 and 1978 respectively, the new sections in the 2013 edition contain many memorable pages. Merwin’s introduction is particularly fascinating, and much more revealing of his beginnings as a writer than anything in his poetry, which reaches universality but is not particularly personal. He describes his father, a Presbyterian minister in the Midwest: “For him, I think, the function of words in public was almost entirely rhetorical.” Yet in this volume, there are many translations that could derive from Merwin’s upbringing, from the long translation of the anonymous Middle English spiritual meditation on “Patience” to his version of Dante’s Canto XXXIII of the Paradiso, an impassioned prayer to the Virgin Mary that springs to life in Merwin’s hands:

you are the one who so ennobled
human nature that the maker of it
condescended to be made of it.

And I, who never burned for my own vision
more than I do for his, raise toward you all
my prayers, and pray they may not be too little . . .

Merwin also describes in the introduction his intriguing encounter and correspondence with Ezra Pound. Their meeting took place when Merwin, as a college student, visited Pound at St. Elizabeth’s Hospital, where the older poet was incarcerated following his treasonous broadcasts during World War II. From Pound, Merwin gained an appreciation both for staying true to the original text, and for creating poetry in English using the raw material of poems in other languages.

At times Merwin is remarkable in his ability to mimic the feel of the original, as in his translation of Dante’s sestina, “Al poco giorno e al gran cerchio d’ombra” (“To the short day and the wide ring of shadow”), which Merwin recreates using the same form in English, though without the rhyme. At other times, it’s puzzling how Merwin can have such disregard for the original form, as in his translations of Ghalib’s ghazals.

Some of the best new translations in this volume are Merwin’s versions of Yosa Buson, one of the great Japanese haiku poets:

Merwin is equally inspired in his translations of the 20th-century French poet Jean Follain. Sometimes a poet and a translator are a match made in heaven, and Merwin and Follain are perfectly paired. Merwin’s unpunctuated lines that quietly build to revelation or a stunning moment go hand in hand with Follain’s writing. Here’s one of his new translations of Follain:

In the year eighteen twelve in Russia
when the soldiers were retreating
among the corpses
of men and horses
the coarse wine had frozen
so the digger’s ax
had to cut away
from the rest even from the dying
the block of red ice
in the shape of a barrel
which no museum
could have preserved.

One might wish that Merwin had revisited some of the translations he had done in earlier books that could stand correction; I’m thinking particularly of his translation of Lorca’s gorgeous love poem “Gacela of Unforeseen Love,” which Merwin mistranslated as a heterosexual poem in an era when explicitly gay love almost never found its way into print. Be that as it may, W.S. Merwin’s Selected Translations is one of the most global and beautifully rendered collections of world poetry that any one translator from the U.S. has ever assembled.