From the top floor of our house, we can see the smoke filling the sky of the city. The wind is blowing toward Brooklyn today, and the smells of the fire have settled into every room of the house. A terrible, stinging odor: flaming plastic, electric wire, building materials.
—Paul Auster,“Random Notes—September 11, 2001—4:00 PM” 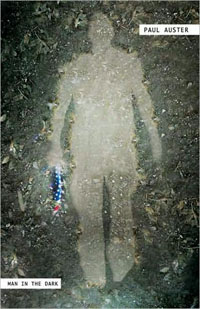 One of the most intriguing and satisfying pleasures in reading Paul Auster’s oeuvre is to note the linkages and variations between and among works. But also important are the changes. In Auster’s post-2001 writing, protagonists have gone from being hunger artists to ill artists, and instead of the fluidity of identity that characterized the earlier fiction, the recovery of identity has become paramount.

Sidney Orr in Oracle Night, Nathan Glass in The Brooklyn Follies, and August Brill in Auster’s latest novel, Man in the Dark, illustrate this new emphasis on recovery. Consider the first sentence of The Brooklyn Follies: “I was looking for a quiet place to die.” Nathan Glass, however, does not die; he recovers his health and his place in the world through his revived connection with others. Likewise, August Brill unburdens his soul to his granddaughter Katya and she, in turn, because of her grandfather’s love, patience, and comfort, begins her own tentative re-entry into a world that has been violently shattered.

Auster now seems to speak with a new urgency, a desire to express explicitly what has gone wrong with the political and public world, and to reconnect, at both the personal and national level, what has been ruptured. In the autobiography Hand to Mouth, Auster describes himself at Columbia University in the late 1960s as “a bystander, a sympathetic fellow traveler. Much as I would have liked to join in, I found myself temperamentally unfit for group activities. My loner instincts were far too ingrained, and I could never quite bring myself to climb aboard the great ship Solidarity.” And his earlier writing bore this out. But now direct criticism appears right in the reader’s face, like that terrible smoke on September 11—there’s no hesitancy about it. 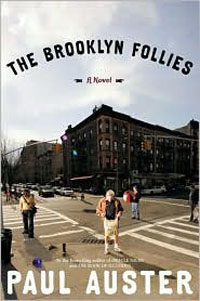 Although it may be a matter of degree and not of kind, there is no question that Auster’s new work directly confronts the current political world. In The Brooklyn Follies Nathan’s nephew, Tom, “rails against the right-wing takeover of America. He cites the near destruction of Clinton, the anti-abortion movement, the gun lobby, the fascist propaganda of talk-radio shows, the cowardice of the press, the ban on the teaching of evolution in certain states.” Near the end of the novel Auster connects Nathan’s daughter’s miscarriage and Bush’s “illegal” election; Nathan calls this time “one of the darkest moments of that fall,” linking the personal and the national. Nonetheless, in this narrative of recovery that concludes at “eight o’clock on the morning of September 11, 2001,” Nathan’s final words are: “I was happy, my friends, as happy as any man who had ever lived.” 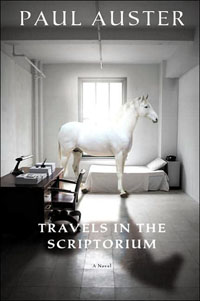 The connections between books written over nearly three decades are complex, and it may be overly simplistic to reduce a phenomenal body of work (thirteen previous novels as well as many works in other genres) to patterns and categories. Last year’sTravels in the Scriptorium, for example, describes a character in a hospital room (of sorts) rather than one who has just left such a room, as in the instances of Sidney Orr and Nathan Glass. In this one-day narrative, Mr. Blank remains caught in the realm of representation; he reads, but in his unspecified panopticon of the present, some external control photographs him while doing so. Like so many Auster protagonists he is a writer, and slightly before the mid-point one interlocutor chastises him: “Mr. Blank. . . you’re cruel. . . cruel and indifferent to the pain of others. You play with people’s lives and take no responsibility for what you’ve done.”

Man in the Dark, a one-night narrative, forms the inverse of its predecessor. Near the start of the novel, Owen Brick, the creation of August Brill during a sleepless night and the protagonist of the story-within-the-story, asks someone in the strange land he finds himself: “Now, if I said the words September eleventh to you, would they have any special meaning?” In Brick’s alternative world America did not live through a terrorist attack, but instead has been in civil war since the presidential election of 2000. The moral of the story in the post-Patriot Act world, Auster tells us, must be to take responsibility, to respect the lives of others, and to care deeply for oneself and one’s world. August Brill does so: he controls his fictional character Brick; he cares deeply for his daughter and granddaughter; he respects the lives of others. Nowhere does this become more apparent than in the differences between the somewhat parallel stories of the imaginary Brick and Brill’s young friend (and granddaughter’s boyfriend) Titus. But two-thirds of the way into this compelling work, Auster changes direction. The change explains much about this family; it becomes at times troubling, moving, cautionary, and relevant.

Auster once told an interviewer “stories are the fundamental food for the soul. . . It’s through stories that we struggle to make sense of the world.” In Man in the Dark Katya has left film school but watches movies non-stop. Brill tells us that at first she watched them to assuage her pain, but eventually her viewing turns active and she shares her thoughts with her grandfather. Katya’s mother, Miriam, works on a biography of Nathaniel Hawthorne’s daughter, Rose. Brill himself, a former literary critic, has stopped writing for the moment but makes up stories for his amusement during sleepless nights, keeps Katya company in her film viewing, and then tells her the story of his life. This expressive household survives because everyone in it speaks. They will not be silenced.

August Brill believes that “the rotten acts human beings commit against one another are not just aberrations—they’re an essential part of who we are.” Yet somehow we continue. The story of our struggle “to make sense of the world,” Man in the Dark ends in a morning’s tentative first light.