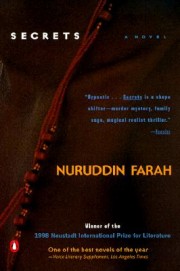 Somalia was birthed in blood, with conflict marking its heritage, its history, and now its present. Before its independence in 1960, Somalia was a battleground for power between the dying British and Italian empires; in the late '70s, the country became a staging ground for cold war maneuveringsbetween the United States and Soviet Union. When Somalia's genocidal dictator was overthrown in 1991, equally bloodthirsty warlords began vying for control, and Somalia collapsed into war and anarchy. Its society and politics are now controlled by clans and subclans. The irony is that racially, ethnically, religiously, and linguistically, the people are homogenous, but clan politics lends itself too easily to the strife in Somalia's atavistic memory. Unless the country collectively confronts its past, strife will rend Somalia into bits.

Novelist Nuruddin Farah places the responsibility for Somalia's current condition firmly on Somalians themselves: "If you take the Somali nation as a family, the betrayal is no longer that of colonialism, it is no longer from outside, but from within. And the cure must also be found from within." Farah, who won 1998's Neustandt International Prize for Literature, says his project as a novelist is to "keep my country alive by writing about it." This goal is not just about cultural preservation but rather about instructions for survival. His most recent trilogy—Maps (1986), Gifts (1992), and now, Secrets—is polemic masked in obituary masked in parable masked in local drama. In Secrets, the nation is personified by a family whose own past tears apart their lives. Kalaman always knew there were secrets surrounding his origin. His parents chose for him a name stripped of any history or family—"Kalaman" comes from a bird's cry heard at his birth, a detached present which goes back only as far as the man himself. As a child who had been "interested in the origins of things, how rivers came into being and why they ran and where," young Kalaman wanted a name that made sense. Now that he's grown up, the name and the cloud of secrecy around his family remain; as a result, his grandfather cannot die, his mother has violent nightmares, and Kalaman has only emptiness. On the eve of Somalia's collapse into anarchy, Kalaman's childhood lover, Sholoongo, appears in his home, and her presence incurs his mother's murderous wrath, Kalaman's despair, and the tumescence of all kinds of secrets.

As secrecy necessitates, much of the novel is written in code. Totemic animals flit through the scenery and meaning is traded through heavily symbolic dreams and abstract folktales. Kalaman asks his grandfather Nonno about Sholoongo's own secrets, and his grandfather replies, "A man shuts himself away in a dark room, raises his index finger, pointing at the ceiling. Reemerging, he challenges the community members to tell him what he did in the dark room. Another man describes accurately what he did in the dark room when alone."

Secrets, by their very presence, announce themselves. As Nonno says, "secrets sabotage the very purpose for which they are being withheld; they give away the very thing one wishes to protect." The word "secret" shouts from each page; the repetition becomes a dead horse, the secrets, once revealed, are unsatisfying, and he abstruse narrative devices call attention to themselves. But maybe that's Farah's game; he is daring us to figure out his secret. The plot collapses because the story has nothing to do with one family's drama; Secrets is a parable about the need for a country to come together to confront the past.

Conceived in violence and ignorant of his history, Kalaman becomes the novel's stand-in for Somalia itself, and Sholoongo, animalistic and other, becomes the manifestation of a festering unspoken history. Sholoongo was born a "duugan"—a baby to be buried, but she survived, "and lived to haunt the villagers' conscience." Young Sholoongo blackmailed Kalaman's mother, aborted his father's baby, and attempted to seduce his grandfather. Sholoongo's arrival brings back an ugly past for each character, yet, once confronted, this ugliness disappears.

The family of Somalia needs to confront their past before they can move beyond blood and clans to create a healthy, coherent society. Farah criticizes Somalians for blaming the dictator and, before that, colonialism for their problems; Nonno says Kalaman's "undealt-with troubles began the instant
he introduced a decisive element of blame-the-other syndrome into his guilt ridden sorrow." Nonno then begins to conflate Kalaman with Somalia:

There are moments in a person's or a nation's life when collapses can be avoided, even if at first they seem inevitable . . . Kalaman could have brought an end to this rigamarole sooner, if he had been true to his own instincts, if he had been forthrightly frank with Sholoongo herself: the Somali collectivity could have reversed the coming decline. He had no right to blame his parents or Nonno or others for his own failure . . . Give people a chance to speak their pieces, and many will display their personal and collective hurts: they all see themselves as ill-used by the dictatorship. Press them further into the corner, ask them for their contributions to the struggle against one-man tyranny, and they fall silent, many unable to deny being accomplices in the ruin.

That is Farah's secret, and he will shout it as loud as he can.