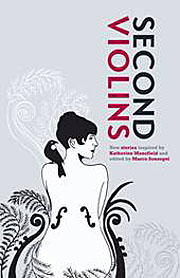 Nearing the end of her brief life, Katherine Mansfield became obsessed with time. She was haunted by the thought of work undone, of leaving mere “snippets” to posterity. Writing for Mansfield was a second life, and, as she poignantly remarked in the final phases of tuberculosis, second breath. In her journals and letters, she described the writing process as a form of possession, or at times, an out-of-body experience. Curled up in bed, one hand touching her forehead as if in prayer, she would sometimes find herself magically transported to an imaginary scene “much realer” than life itself, and was dogged by the anxiety of getting it all down before the spell evaporated. In her last will and testament, she entreated her husband, John Middleton Murry, to destroy all but her most polished stories, since she wanted no untidiness at the end. Luckily for us, Murry disobeyed. He arranged for everything to be published, including the youthful collection In a German Pension, as well as her letters, journals, and even a Scrapbook he assembled from her notes and fragments.

Although Murry’s editing of Mansfield’s work and his sanctification of her image as a “child without stain” has been much criticized, in the end we must thank him for having saved so much work and rendered it public. Today Mansfield’s reputation rests not only on the quality of her relatively few stories, but on the letters and journals which give us a window onto the creative processes as they occur in a writer’s mind—the “laboratory of the writer’s craft.” The fifteen fragments and unfinished stories published by Murry in the posthumous collection The Dove’s Nest have also greatly contributed to our understanding of how she worked. Though Mansfield judged those fragments unworthy, not everyone would agree. Regarding them, J.B. Priestly commented, “The merest beginnings are capital reading. Even though we never come to the point and do not know what the stories are about, it does not seem to matter much . . . The delicate enchantments of her art are there as of old.”

On the occasion of the 120th anniversary of Mansfield’s birth, poet and Victoria University professor Marco Sonzogni invited seventeen leading New Zealand authors to produce new stories riffing off the beginning paragraphs of Mansfield’s short story fragments. The task was not to “complete” the tales as “Mansfield would have written them,” but to create new, original, contemporary pieces of writing using Mansfield’s work as inspiration. Many of the authors represented here have some special connection to Mansfield. Some have been winners of the prestigious Bank of New Zealand Katherine Mansfield awards for the short story; others have been recipients of the Menton fellowships given in her honor. Peter Wells has written a play based on Mansfield’s “Prelude” and “At the Bay,” and Vincent O’ Sullivan, honorary president of the Katherine Mansfield Society, is the distinguished editor (with Margaret Scott) of Mansfield’s Collected Letters.

Reading these stories, we sometimes hear an echo of Mansfield’s voice, convincingly transposed to our own times in O’ Sullivan’s story, “On A Different Note.” Favorite Mansfield settings resurface: hotels, cafés, train stations, hospices. Though we may be in a world far from Mansfield’s own, with our iPods, computers, intercontinental flights, and middle-class gay life—the subject of Peter Wells’s witty “Honestly”—still we find Mansfield’s character types and situations: family and marital conflict, the prevarication of the powerful, the fragility of old age, the illusions and fatuousness of youth. Her concept of the short story has imposed its formula on the style and structure of most of the stories in this book: subtle humor and irony dusted upon the withering circumstances of human life. Through these stories, as through Mansfield’s own, comes a sense of alienation—due to age, illness, gender, or the condition of being an artist.

Though the collection as a whole makes for pleasant reading, two stories in particular stand out, inviting the reader to reflect not only on the stories themselves, but on the issue of “rewritings” and “afterlives” to which this book refers. Tellingly, both these stories introduce a theme which barely glimmers in Mansfield’s own work, but which her friend E.M. Forster would later explore tentatively in A Passage to India: the sins of colonialism. In Maori writer Witi Ihamaera’s “Such a Sweet Old Lady,” which may owe something to Forster’s own fanciful stories in The Celestial Omnibus as well as to Maori myths, the elderly Phoebe, in a diabetic coma, relives a visit to the Galapagos Island where she had gone as a child with her father, one of Darwin’s assistants. Here she discovers to her great dismay that the father she adored, the man of learning she so admired, cruelly tortured and destroyed Galapagos wildlife in the name of science. El Rey, an ancient tortoise killed by her father, returns in her hallucination to answer the final question of life and death—“Will it hurt”—and accompany her to the next world in a triumph of magical thinking and myth over science and the rational mind.

Tracey Slaughter’s “White Paper, Black Paper,” stylistically the most original story in the collection, investigates a situation Mansfield herself treated in one of the later stories, “The Man Without a Temperament”: disruption of a marriage by an incurable, highly contagious disease. The story combines a third-person narrative of a husband’s resignation and betrayal with diary entries written by his tubercular wife in a sanatorium. As she waits to die and be autopsied, she recounts the rebellion of a fellow- patient,“ the colonial woman,”—a photographer who documents her life in the sanatorium by taking pictures but cannot send her film out to be developed for threat of contagion—so she snaps her photos without film.

The “colonial woman” may be a reference to Mansfield herself, who in her last year of life confessed to a friend: "I have been a camera.” Yet the figure of the mysterious “colonial woman” in the story blurs in with the figure of a “dark girl” at the end of the story, a woman of color, whose condition as invalid and as impotent artist speaks of the disenfranchisement native people experience under colonial rule. One of her favorite subjects to photograph is “snow”—symbol of isolation, numbness, and, of course, suffocatingwhiteness. Her “infected” film also brings to mind Gilbert and Gubar’s celebrated feminist study of 19th-century literature The Madwoman in the Attic, in which infection is a metaphor for the “dangerousness” of women writers challenging patriarchy. In Slaughter’s story, the narrator of the diary (who has been supplanted by her husband’s subservient secretary) comes into possession of the colonial woman’s camera and begins to take pictures herself. The task of seeing and documenting has been passed along to another patient; the artist’s rebellion thus continues.

Mansfield called her own country “A Little Land with No History,” and cherished her memories of its natural beauties, yet for her, London and Paris were the center of the universe. She would perhaps have been surprised by the slow decentralizing of Europe as the hub of world culture, and the third-world shift that has occurred in recent times; one wonders what she would have made of Claude Lévi-Strauss, Franz Fanon, or Edward Said. Since her death, the literary landscape of the English language has changed radically, accommodating new continents, racial perspectives, and worldviews Mansfield could never imagined. Most certainly she never dreamed she herself would become the grandmother of New Zealand literature.

Coming to the end of this anthology, which concludes with Witi Ihamaera’s fantasy, readers may pause to reflect on how fiction has changed since Mansfield’s day, on how she contributed to that change, and on how her work is evaluated now in light of that change. These issues go beyond the scope of Second Violins, which is to offer a tribute to Mansfield’s unfinished writings, yet as those fragments are “filled in” and “elaborated” by some of New Zealand’s major contemporary writers, the shadow of Mansfield’s reputation and the shape of her achievement loom large. We still see the short story pretty much as she did: a glimpse of the unfathomable contained within a highly controlled form, a bottomless ocean imprisoned in a seashell.

Mansfield was a tightrope walker. In her writing powerful contrasts tug and thwart; domesticity, humor, wit, irony, a childlike perspective, and a light touch are spun across a sickening void, into which we are allowed to peek as we tiptoe across the vibrating rope with her. Yet safely on the other side, in the late stories, we know we have seen something of those disconcerting depths. Surely that was the secret of her “delicate enchantment,” and some of the stories in Second Violins approach that understanding. What better tribute to New Zealand’s greatest writer?