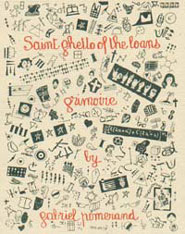 I’d like to be able to reflect on each and every word.

I’d like not only to give each one a subterranean meaning, but also to break its jaw and thus transform the face it intends to possess forever.
—Gabriel Pomerand

Lettrism, perhaps the single most obscure avant-garde art movement in all history, was acclaimed by contemporaries as illustrious as Boris Vian and Guy Debord, and since its inception in Paris in 1945 has proved a dark precursor to Concrete and Language poetries, embracing also phonetic performance, symphony, and film. Published in only a grievously limited edition in Paris in 1950, Saint Ghetto des Prets, Grimoire is a book of text and parallel “metagraphics” rigorously elaborated by Gabriel Pomerand, whose extremist Art—until now, utterly neglected—Lettrism’s founder Isidore Isou claimed would immortalize the neighborhood of Saint Germain des Prés in a manner unmatched even by its habitués, the existentialists.

A chronicle, in argot, of an alley cat or night owl out on the prowl, Saint Ghetto of the Loans is as street-legal and ready to roar as Francois Villon’s Grand Testament. Pomerand himself was sued for defamation, jailed for brawling, and arrested for public indecency. Among its in-crowd of outsiders, illuminati like Sartre, Camus, and Cocteau also scintillate briefly then disappear.

While Pomerand refers to the Lettrists as “the new Egyptians,” calling his rebus-like picture-scripts “hieroglyphics,” they revivify too James Joyce’s then more recent neologism “verbicovisual” from Finnegans Wake. For example, laid out like hex signs or Chinese Checkers: musical scales with the note “la” flanking a death’s head and scythe, footprints, then one die, plus exact, yet incomprehensibly idiosyncratic incunabula, enact what Pomerand calls in his manifesto-like introduction “Geometric priestliness, or the dream of a clear and obscure style.” Once decrypted, these figures afford us, in French, “la mort par des années.”

Fortunately for the uninitiated, Pomerand’s often otherwise unyielding esoteric ciphers are interpreted here in both French and English. Still, despite his having conducted extensive iconographic research at the Bibliotheque Nationale, these endearingly whacked pictograms resemble nothing so much as Hugh Downs’ trick box TV puzzle game Concentration, if it had been radicalized by the naïf expressionist stick-figures of postmodernist painter A. R. Penck.

Gabriel Pomerand was born in Paris in 1926. Indispensable to the excesses of its notorious nightclub Tabou, he passed from gnawing poverty beneath the Pont Neuf to the retinue of King Farouk, finally committing suicide in Corsica in 1972. With Vian’s Manual of Saint Germain des Prés and Debord’s filmscript On the Passage of a Few Person’s Through a Rather Brief Unity of Time, both held under the Letterist spell, Saint Ghetto of the Loans completes the portrait of a wildly extravagant underground Parisian scene equal to Hemingway’s A Moveable Feast. Readers today owe its dauntless translators, Michael Kasper and Bhamati Viswanathan, an unredeemable debt of thanks for this rarest of book’s republication.