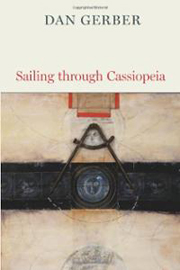 Dan Gerber has always been a quietly magnificent poet. From his earliest book, 1971’s The Revenant, to his remarkable new collection, Sailing through Cassiopeia, Gerber’s poetry is a poetry of respect. One thinks of Chinese poets of antiquity who emphasize seeing “the world of the ten thousand things.” Unlike many lesser poets, Gerber has never been shy about wearing his influences on his sleeve, his respect for the world extending to poetic lineage: García Lorca, Machado, Rilke, Stevens, Kabir, and Rumi, to cite a few, as well as Tu Fu, Wang Wei, and other poets of the T’ang Dynasty. In a world where poets are obsessed with standing out and “finding their voice” (a model of individualism that serves corporate interest), Gerber is one of the few who truly does stand out because he blends in. He is like a gorgeous magnolia blossom on a tree of beautiful blossoms—his “individual” beauty is stunning, but it’s the tree that’s important, each blossom enhancing everything around it. He has given his life to poetry as a practice, his poems chronicling how he shapes and is shaped by voices and silences of those who have come before.

Never derivative, eloquently poised at the precipice of silence, Gerber’s quietly magnificent poems speak with the weight of living—what Robert Bly has referred to in other contexts as “psychic weight.” Perhaps it is this weight that has contributed to Gerber’s relative obscurity (despite his close association with Jim Harrison, with whom he founded the seminal journal Sumac and Sumac Press in 1968), which is unfortunate because younger poets have a great deal to learn from him. One thing to be gleaned from Gerber is how to engage poetry foremost as a practice. In Sailing through Cassiopeia Gerber’s decades of apprenticeship are palpable in a book so stunning—so tenderly branching into the world even as it tunnels inward—that it is difficult to put down.

Of course it opens with an epigraph from Rilke. Its first poem, “In Our Rented Cabin,” follows with an epigraph from Tu Fu: “I live my late years as if I’ve stolen my life.” Gerber’s courage in locating his sources at the outset is admirable, especially at his ripe age of seventy-two. His work, though, is uniquely its own, even as it shares points of engagement with mentors. He reflects back not only upon his life, and forward into what will come, but more importantly remains attentive to the now. It is telling that Gerber mentions the rented cabin in a few poems; he recognizes the delicate edge between dichotomies (self and other, individual and collective, owner and tenant, “owning” one’s body and abandoning it at death):

Little creek,
under the willows by my rented cabin—
more mine than any I could own—
tell me again the secret name
you murmur as I sit here alone,
without disappointment or hope.
(“In Late September”)

One element of the past that permeates the book is family. We meet Gerber’s mother and sisters Scotti, Sally, Paula, and Gay. The poet’s father, though, is most prominent. Gerber stirs memories, sometimes humorous, as in “Subject.” After the initially vague title, the poem clarifies the ambiguity: “When I asked my father if it would / make me insane / or cause dark hair to grow in my palms, / so everyone would know— / he laughed, and his head / bobbed back a little, in surprise.” However, for Gerber, the past never remains mere memory but is alive not only with the world but with ancestors, with lineage. He makes this marvelous connection in “Crocus,” for example, achieved largely through a subtle shift in verb tense and caesura:

Thirty-six years ago my father died
while snow was melting
and white and yellow crocuses,
in their spiked cups of bright green,
push their way into the air,
through soil that’s just now waking up.

Thus, Gerber experiences the past as a method of inhabiting the now. His work, like poets of the T’ang Dynasty, achieves a remarkable transparency between inner and outer worlds—“I resign / to the cries of others in me” (“Prolegomenon”)—leaving one’s ego aside, merging self and other. This extends to the world of physics, as in “To an Electron”: “you are here, / a tiny thing spinning among / tiny things spinning / that exist—if they do— / only because of each other, / only because there is spinning.” In “Rothko,” the poet investigates the complexities of seeing—how much of seeing is individual action and how much of seeing “sees us,” so to speak: “Does the painting come from my seeing, / as if it were a thing, and I a thing, seeing?” In one of the most moving poems in the collection, “Quail,” Gerber takes this a step further:

When I turn to Machado, the world
is incomparably Machado,
until it becomes Wallace Stevens—
like the quail—
pulsing pizzicato of hosannas,
taking me right back to Bach . . .

Typical of Gerber’s earlier books, we get a nice dose of poems about his dogs, tender yet never saccharin, as in “Old Dog”:

She has lived in us like rain in clouds,
and now, unsteady on her feet,
half-dead, half-blind, half-daft . . .

I doubt she feels the sense of doom
we carry
in our also-aging bodies.

Other animals populate this collection—snails, Mexican Doves, even parasites, as in “To a Tick,” where he again demonstrates reciprocity: “What a perfect couple we are / now, living off the same blood.” The most moving example is “Barking and Howling,” in which the poet hears a pack of coyotes in a canyon,

most likely closing in
on the spotted fawn I saw this morning,
dragging its right hind leg
to keep up with its mother and twin.

I pray it may not be
the wounded fawn I saw,
now trembling in fear.

Another perhaps
but not that one.

Dan Gerber’s work is complex without being complicated, his language keenly aware of itself without being flashy. He’s a fascinating blend of voices and traditions, none of which compete with one another, the poet not even competing with himself to be distinct from his poetic ancestors. In a word, he is not fashionable; Gerber simply doesn’t fit. And that’s what’s most endearing about him, but also painfully frustrating, as his work is not as widely known as it should be. As he says in “Dyslexic,” after being tutored in second grade to help with his “spelling,” though “they didn’t yet have the word”:

After a week of frustration,
my teacher quit.

It was like trying to reeducate a magnet,
he told my mother. As if
I’d been born into the wrong language, he said.