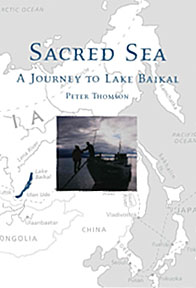 “Yikes!” is evidently an insufficient response to discovering that the deepest lake in the world, known also to be the purest, is undergoing alarming biochemical shifts in response to human activities. Perhaps “Bloody Hell” will suffice. This is Siberia after all, the nether regions of Russia, and Lake Baikal—home to miniature, pollution filtering shrimp (epischura), the world’s only fresh water seal (the nerpa), and the hardy people who live on its shores—is under siege.

Author Peter Thomson invited his younger brother to join him on a journey half way around the world to see this ecological wonder. As hard as Thomson tries to portray the lake as a miraculous entity capable of healing from a variety of assaults, the verdict is still out on its ability to absorb warming temperatures in a climate so cold that the locals take pride in their skillful adaptation to the frigidity. Some believe that the way to solve any assaults to the lake, the most obvious culprit being the paper mill with its toxic effluents, will be through economic development. Never mind the high concentrations of industrial pollutants stowing away in the blubber of the nerpas, who dine on the epischura that gobble up PCBs, dioxin, and any number of waste products generated by transforming trees into paper products.

Thomson, a veteran environmental journalist, admits that he wants “to believe that this remote place is different,” that “Baikal might somehow manage to elude the corrosive influence of civilization.” Seeking one place on earth imbued with that vanishing essence, hope, he leaves Boston an idealist, attempting to sublimate the “cold-eyed realist” he confesses that he is. Along the way he encounters all sorts of people, iconic architecture, a frustrating bureaucratic machine, some desultory meals, at least one exquisite meal, and dreary landscapes that the realist in him cannot help but describe in detail. Such details might threaten the narrative if Thomson weren’t willing to acknowledge the anxiety this trip provoked in him.

Hope arose for Thomson in the form of his guide, Andrei, who although initially aloof, softens one night and divulges his vision of a trail similar to the Appalachian Trail. Exposed to travelers attempting to leave behind as small a footprint as possible, Andrei absorbs and passes on valuable ways to do so. The exchange takes root in Thomson, who returns on another trip to help build that trail, a gesture significant both for the ground level engagement with an enigmatic location as well as the completion of a personal odyssey for the author.

A skilled science writer, Thomson shares the perplexing and not altogether uplifting news of the lake’s health, presenting an even-handed portrayal of a natural wonder that is as imperiled as every other place on earth. Unafraid to share the tediousness and vexation, beauty and hideousness that travel sometimes entails, he recounts not only the vast physical terrain he traversed, but also intimate personal details that echo the scale of the geography he and his kid brother covered via planes, trains, and a cargo ship across the Pacific. The result is a strong book that is as much about the sacredness we carry with us as it is about a “sacred sea.”