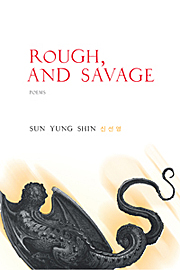 The fiery depths of the Hell created by Dante Alighieri in 1861 contain eight circular, descending layers, intensifying as he travels deeper down with his guide, Virgil. In her new collection Rough, and Savage, Sun Yung Shin draws from Robert Pinsky’s translation of Dante’s Inferno, the Korean War, and events from her own life to create a multi-layered archipelago combining the past and the future and mimicking or redefining the epic poem. As we follow Shin deeper down into her inferno, themes of separation, possession, and ignorance collide with images of war and violence.

Shin frames each section of her book with a clipped line from the Inferno, with one exception—but it is a telling one, as it presents a redaction of a verse from Ovid’s Metamorphoses. These stagnated lines form their own poem that flows through the layers, guiding the reader as Virgil guided Dante:

Here as elsewhere, Shin only gives us pieces, reducing humans to their true animal form—“rough / And savage,” as she says in the book’s epigraph, itself an erasure of a passage from the Inferno—by showing circumstances of cruelty and lack of humanity.

Suffering, temptation, and the search for identity preside in this book, along with a heavy emphasis on infancy and parent/child relationships. In “This concavity, the blood to pool and wait,” Shin places three carets (^^^) at the top of every page; underneath she portrays scenes of death and violence intertwined with mythology. “I am weak now, deposed and in plain sight,” she writes; “soldier and enemy / son and sister . . . I renew my distant colonies / I forget how to avenge myself.” We feel a sense of defeat, giving up to the possession of a stronger power. The carrots point to heaven, pleading, asking God to answer, to help.

Throughout this collection, Shin poses questions of theodicy, plunging into philosophical murk to seek answers. Concerned with religion, family, war, and more, she guides us along her rough and savage journey through a contemporary inferno.