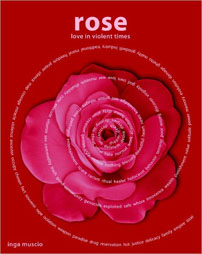 I donʼt often go in for political agendas, but “in” is precisely where one must go, according to Inga Muscio, to source the wellsprings of violence and to find the courage for empathy. The title of her new book, Rose: Love in Violent Times, echoes the title of her first book, Cunt: A Declaration of Independence, and indeed it could be a sequel—if self-respect leads to greater regard for others. Muscio argues that it can and should; the book continually affirms that a strong sense of self precipitates an expanded awareness of the surrounding world.

In the second chapter, “The Violence of Entitlement,” the author makes the case that we—and she doesn’t specify her pronoun as Americans so much as contemporaries—have been indoctrinated with an aggressive “frontier mentality” that prizes advancement before intimacy, progress before honey bees. Physical acts are only one particularly grotesque aspect of violence. Inattention equals acquiescence and contributes to raising the societal threshold for emotional immunity. When it comes to the context we inhabit, Muscio makes it clear that we are either complicit with it or instigating change.

While Rose might recall some of the protest anthems of the 1960s, it is no flower child pleading with us to make love instead of war. Bob Dylan asks those who won’t lend a hand to get out of the new road, but Muscio claims that we are the road—paved and oil-slicked and littered with the detritus of power-centric thinking. She dares her readers to commit to responsible relationships. “Love is a verb,” Muscio insists, and if it raises consciousness, it does so in proportion to increased demands.

Her call to action is as immediate as a cell phone. Words carry bias. It is not only Styrofoam that remains with us for generations, but those “material witnesses to past, present, and future” that gaze out from every dictionary. Change starts at the level of language, she argues:

Itʼs unhealthy and passively violent to use words like “love” or “war” without ever stopping to define them in your life, from your experience, while taking in as many perspectives as possible.

Her premise is as far-reaching as her hope, but it is not unrealistic. She doesnʼt propose to end war or violence, but to embrace a perspective that comprehends a total human nature. To pretend away imperfection or to idealize someone ultimately reduces the capacity of love, which is not something, she says, “other people bring into your life” but “something you do.” Violence even operates as an agent of metamorphosis Muscio can appreciate, even if she admits she doesn’t understand how.

In this way, Rose may present an irreconcilable position for some. Inga La Gringa, as the author goes by on her website, makes her points in terms that might chaff someone raised, in an environment where propriety outweighs expressive license. She also has a tendency to simplify the sources of blame to make her point. But to recognize how certain reactions have been governed by hand-me-down beliefs is to stop being ruled by them. The force that drives the paradigm of violence can evolve, and her text provides one directive for undertaking it.