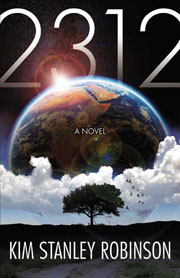 Kim Stanley Robinson’s 2312 is a love story and a solar-system-spanning travelogue. It performs magnificently in both roles.

The book is also a synthesis of “hard” and “soft” science fiction, one that engages with the most haunting and important questions poised by both genres. “Hard SF” is based solidly on “hard” sciences; works based on social and anthropological sciences are usually labeled “soft.” But Robinson’s novel refuses to choose sides. Its concerns include quantum physics, speciation, artificial intelligence, terraforming techniques, and the logistics of massive engineering projects; it is equally concerned with utopian visions, their practical applications, the social consequences of artificial intelligence, and the lived experience of people who enjoy fluid gender identities—the latter furthering the science fictional conversation begun by two classics of the genre, Le Guin’s Left Hand of Darkness and Delany’s Trouble on Triton.

2312 is a thriller, too, but this aspect stays mostly in the background. While vast conspiracies are investigated and entire planets are threatened, the story doesn’t concern itself with cheap thrills, manipulative suspense, or short-term dangers; it plays a much longer game, and a far more rewarding one. When characters we care about find themselves in life-threatening circumstances the action slows down rather than speeds up, and the results are viscerally effective.

But among all the enduring questions, conversations, and plotlines in 2312, the bits of this book that will haunt readers the most are the love story and the travelogue.

In Robinson’s world, humanity has spread throughout our solar system, making homes in environments as diverse as the nightside of Mercury and the moons of Saturn. Swan, one of the two protagonists, is an artist and an architect from Mercury. Her home planet suggests an important character trait: she begins the novel as a messenger, carrying letters which cannot be entrusted to any electronic data stream and must therefore be delivered in person. She takes on the role of Mercury by bearing messages between planets—and therefore between Greco-Roman gods. Swan is also mercurial: protean, impulsive, and changeable.

Wahram, our other protagonist, is a diplomat from Saturn. True to his planet, he is saturnine, and, to a certain extent, Saturn himself. He is obsessed with time, repetition, and iteration, which manifests in his musical tastes and his problem-solving strategies. Wahram is orderly in contrast to Swan’s mercurial wildness, and the two of them together are able to accomplish far more than either could separately.

This mythological game is more than clever symbolism. It might be a complex response to facile, gendered stereotyping (men from Mars, women from Venus) in Robinson’s post-gender solar system. It is certainly a pleasurable trail of breadcrumbs for navigating through the thoughts and perceptions of two perfectly realized characters. Either Swan or Wahram’s point of view would have been rich enough to fill an ambitious novel; taken together, the emotional and intellectual achievement of their combined perspectives is almost overwhelming.

Through Swan and Wahram’s travels the reader explores and experiences the settled solar system. If you stayed up late to watch NASA’s Curiosity Rover land on Mars, then take a moment now to remember the glowing, awe-struck faces of everyone in the control room when the first images came through. Reading descriptions of settings in 2312 feels pretty much like that—descriptions such as the opening pages’ portrayal of sunrise on Mercury: “The sun is always just about to rise. Mercury rotates so slowly that you can walk fast enough over its rocky surface to stay ahead of the dawn; and so many people do.”