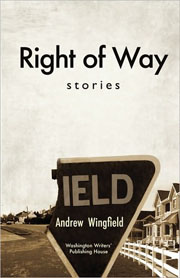 Right of Way is fiction with an argument. Resisting the nomadic, rootless nature of much of contemporary American life, author Andrew Wingfield has written a series of stories about one fictional D.C. neighborhood, Cleave Springs. The first story, told by a one-time “hyena” of Capitol Hill now transformed into a “novice restaurateur,” reveals the book’s central claim. Enlisted by his wife to chase down the escaping dog of a woman outside the restaurant they own, the husband takes the time, mid-chase, to reflect on the neighborhood in which he lives and works:

America is a rich country growing poorer all the time in places. Cleave Springs was a real place, a place that rose early last century with the great rail yard that spawned it and then declined as the rail yard went quiet. A place that had tasted death and was waiting to be coaxed back to life.

Of course, the price of such eloquence is the reader’s suspicion that the narrator is merely a mouthpiece for the author. In the case of the opening story, the suspicion is warranted: not only is the central “message” of the collection neatly laid out, but it is done so in the midst of a chase which orients the reader to the neighborhood. Thus, our narrator runs by the Lily Pad café and into Brimslea, introducing settings for later stories. The rendering of place here, as elsewhere in the collection, is done well: Wingfield finds the precision of detail necessary to make the individual parts of his neighborhood stick in the reader’s memory. Passing through the Salvadoran neighborhood, still hot on the dog’s heels, the narrator remarks, “I endure the strong fish odor that wafts out from the Feria del Pescado, briefly savor the smell of grilled meat and spices around El Jardin.”

Unfortunately, Wingfield’s characters are often less fully realized than the place where they reside. In this story, after a long chase, the narrator finally corners the dog and grabs him, yelling “like a barbarian,” when it bites his hand. The twist is that the narrator’s wife (and the dog’s owner) have, unbeknownst to him, been following the chase all along; the barbaric yell, then, is supposed to be a revelation to the wife of another side of her husband’s nature. But it is a muted epiphany: the story hasn’t given us good enough sense of what their everyday interactions are like to make this “other side” of the husband seem strange. (“Hank Williams Dialogues,” a later story in the collection that takes up the same characters, is more revealing.)

When the characters are rendered as well as place, however, the results can be stunning. “Lily Pad” is a case in point. It is a simple enough story about the blossoming (interracial) romance between two high school students—Tre, a talented guitarist who is a regular at the cafe, and Yreka, the barrista who serves him. But Wingfield complicates it through use of the story’s form—first person journal entries from Yreka and class assignment reflections from Tre—one that allows the reader to experience (rather than merely be told about) the family conflicts and tensions inherent in the young couple’s budding relationship. In the story’s climax, an open mic night at the Lily Pad, Tre dedicates and plays a song to Yreka; overwhelmed by the burden of “everyone’s eyes” (including her father’s and Tre’s parents), she runs out into the street carrying Tre’s class project, a sack of flour standing in as his “baby.” When her father catches up with her, we learn that Tre’s family and her own have a shared history, that her father and Tre’s father knew each other in high school:

“You were friends?”
He smiled. “Friends wasn’t allowed. Friendly was. Me and Sal, we had things in common. Both liked jazz, both played horns. And then we both had baby girls we couldn’t keep.”
“Tre had a sister?”
He nodded again, sorrowful. “Still a baby when they lost her.”

Wingfield is adept at revealing the past of his characters’ lives through their present (new) relationships, and in stories like this one, the payoff for his technical skill is big. Besides introducing a reconciliation between Yreka and her father here, Wingfield sets the stage for the concluding scene, which presents the stirrings of a renovated father-son relationship between Sal and Tre. This scene that couldn’t have the emotional resonance it does without our knowledge of this history is itself more powerful because it has come from the voices that have experienced it firsthand, from Yreka and her father.

As commendable as such writing is, some readers might wish for more complexity in Wingfield’s overall vision. One of his implicit claims in the collection—that people in a neighborhood who reach out to one another can experience healing, consolation, and insight into their personal lives—fails to acknowledge that reaching out in this way is always fraught with risk, that true understanding is hard-fought, and that the fruits of these relationships come slowly and with great patience. In Right of Way, these harsher realities of neighborhood life are not given their due; every story ends with the protagonist extending or experiencing some gesture of consolation, or receiving some insight into his or her life. In stories like “Lily Pad,” in which the consolations are paid for by some commensurate struggle or suffering from the characters, the closing moments feel right, testifying as they do to the nourishing capacities of narrative. But when they happen routinely, the reader begins to be suspicious of them, as they seem too cheaply granted. What of the hardening of hearts? Of ongoing misunderstandings? Of quarrels that turn violent? Are not these, too, the stories of our neighborhoods?

The good news for Wingfield is that he can consult his own work as he goes forward. The voice of Tre, sampling a glass of wine with his father at the conclusion of “Lily Pad,” offers a useful analogy in the creation of good fiction:

now i lifted the glass to my lips and let some of the wine pore into my mouth and held it there for a few seconds before i swallowed. it didnt taste bad like it did when i was younger and it didnt taste good either but it tasted complicated.

There are a number of moments like this in Right of Way, moments worth holding on the tongue of one’s mind like that “complicated” wine that gives the reader reason to hope the complexities and complications of Cleave Springs will deepen if Wingfield explores its terrain further in the years to come.