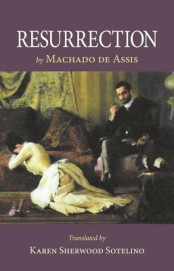 Brazilian novelist Joaquim María Machado de Assis is the author of several important 19th-century fictions—among them Quincas Borba (Philosopher or Dog?) (1892) and Dom Casmurro (1899)—that chronicled Brazilian society of the period, taking the reader into a world of Portuguese-speaking eccentrics, parties, small-talk, societal gossip, and, most importantly, love and delusion. His first novel, Resurrection (1872), now translated for the first time into English, has nearly all the elements that make Machado de Assis’ work so popular, the major difference being that here the scale is much less epic than in his later works. While its lack of complexity slightly disappoints, it gives us a kind structural glimpse into the underlying themes in those later masterworks.

The plot of Resurrection—and in this author’s books, plot is crucial—focuses on a retired doctor, Félix, and the two women he loves: Raquel, a shy and retiring young woman, and the beautiful and well-to-do young widow Lívia. Minor but important characters include Lívia’s brother Viana and a mutual friend, Meneses. Numerous other figures fill the rooms for the book’s several parties, but only one other figure stands out, the villain of Machado de Assis’ tale, Luís Batista, a man who has been spurned by the widow.

Although the story of these figures’ comings and goings are the heart of this Brazilian fiction, the action is often pared down in this work so that the author can center his attentions on the psychological conditions of his three major figures. Both women are in love with the so-called “hero,” although in time he rejects both of them, because he himself—as we gradually come to discover—has no heart, justifying his rejections and his unperceived misogamy to be the fault of the two irreproachable women. In that respect, Félix can be seen as an early fin de siècle dandy, a man somewhat like characters out of works by Wilde or Huysmans, albeit not recognizing himself as homosexual.

In this case, it hardly matters; the doctor’s core problem, as the author makes clear, is his inability to live life. If we, as readers, might be able to forgive his rejection of the fragile Raquel in order to marry Lívia, we cannot forgive Félix for believing an anonymous letter castigating the widow for driving her husband and others to despair because of her unfaithfulness. The letter, in fact, has been sent by Luís Batista, in revenge for Lívia’s dismissal of him. And it is Félix’s reaction to that Iago-like act that tells us of the doctor’s inability to love. Even though he later discovers the letter to have been Batista’s lie, Félix continues in the illusion:

When all had calmed down in his heart, Félix naively confessed to himself that the breach in his love, as painful as it had been, was yet the most reasonable solution. The doctor’s love experienced posthumous doubts. The veracity of the letter that had prevented the marriage, with the passing of years, not only seemed possible to him, but even probable. One day Meneses told Félix he had ultimate proof that Luís Batista had written the letter. Not only did Félix refuse his testimony, he did not even ask what proof he had. (160)

As Machado de Assis sums up his protagonist: “Nature placed him among the class of men who are cowardly and visionary, whom the poets describe as ‘losing the good for fear of seeking it.’” So does this brilliant author transform his “hero” into a kind “anti-hero,” a figure who begins the work as a possible romantic but in the end becomes a modern everyman, unable to act because of inner opposing forces. The title of his work becomes ironic as what the hero perceives as having “saved” him has, in fact, prevented him from having lived a full life.

While Machado de Assis wrote into the early 20th century, he never adopted modernist transparent narrative strategies as did Henry James (and later Marcel Proust, Virginia Woolf, and William Faulkner). If his storytelling often takes us into a psychological world akin to modernist writing, Machado de Assis remained an interruptive narrator, which is one of the reasons his work is so charming. When Meneses first convinces Félix that Batista is behind the letter, for example, the author intrudes:

Reader, let us understand each other. I am the one telling this story, and can assure you the letter was indeed from Luís Batista, However, the doctor’s conviction . . . was less solid and well thought out than befitted the state of affairs.

In short, Machado de Assis humorously criticizes his characters for believing what they do—even when they are right! At other times, the writer uses his authorial powers to speed up or slow down his narrative as in a film: “It was mid-December. The wedding date was imminent. Everything required a swift solution.”

Like several writers of the period—Zola, Stein, Lewis, Barnes, etc.—Machado de Assis retained his authorial voice in order to entertain the reader and point to his themes in a way that would be picked up again by postmodern fiction writers. Accordingly, while some readers may see these intrusions as “old-fashioned,” they are in fact original and fresh, and they help to enrich his art. If Resurrection is far from being a major work, it reveals much about this great writer’s literary methods.