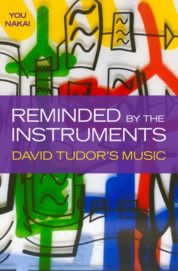 While the piano and the organ may superficially appear similar (both do employ a keyboard), this is a misperception. The piano is a fundamentally percussion-based instrument, whereas in terms of sound functionality, the organ aligns with the family of wind instruments. There are no hammers hitting wires in an organ as in a piano, so while having a distinctive sound, an organ may be easily altered to mimic sounds of other instruments. This is perhaps the most basic of the discoveries offered in You Nakai’s Reminded by the Instruments: David Tudor’s Music, yet understanding the differences and similarities between instruments is the foundation of Nakai’s impressive overview and of the many more tantalizing discoveries to be had.

Reminded by the Instruments is not a biography per se, but rather an elaborately detailed consideration of Tudor’s music as a biography-of-sorts. This aim is pursued with full diligence by way of examining the many instruments (primarily electronic) Tudor utilized to achieve his works. Nakai emphasizes that one key instrument Tudor relied heavily upon from the start, and learned much from, was himself:

Born in Philadelphia on January 20, 1926, he was usually remembered as an extraordinary pianist who was instrumental to the music of many Americans and European composers in the 1950s, influential to many more. It was often said that his virtuosity—as a pianist as well as a thinker—had inspired composers around him in New York to experiment with how they wrote their scores, which led to the development of so-called graphic notation—a form of musical score which requires the performer to be involved in the process of creating the performance score.

Composers such as John Cage, who wrote works for Tudor in the 1950s, “later portrayed Tudor as a black box whose internal mechanisms were unknown, but nonetheless always output extraordinary results from any input material.” As Cage recalled: “One assumed he could do everything. (In fact, hearing him perform was proof.)”

Tudor’s music, with its striking contrasts of bumbled-sounding knocks and bangs against whispery snaps and sizzles, might strike many an ear as nearly comical, yet his intent was ever-serious. Nakai delves into the occult roots of Tudor’s music, demonstrating a debt to the spiritualist Rudolf Steiner who “took great pains to coordinate the metaphysical nature of music with the physical mechanism of the human body,” in part by combining the “great significance in the fact that the inner ear is placed in a fluid” with the fact that “when one breathes out, the fluid in the brain descends to the diaphragm area through the spinal column, and when one breathes in, the same fluid is pushed back to the brain.” This “formed the basis of Steiner’s view of the human body as a musical instrument.”

Not surprisingly, as a result, “when composers began to regard him as a musical instrument, Tudor was delighted.” This reminded him of “the theory of the respiratory mechanism he had read in Antonin Artaud’s writing, which was also reminiscent of Steiner’s teachings.” Artaud’s idea, known as “Affective Athleticism” was “precisely what Tudor was looking for: the art of creating temporal continuity, which instead of being grounded in the psyche of the performer, composed the psyche as an effect of bodily action.” He soon found that “unlike the difference between the worlds of organ and piano, the difference between the instrument and the instrumentalist appeared to blur.” His approach to instruments grew out of his own sense of himself as instrument. As Nakai notes, Tudor “expanded the act of composition through his particular approach to the performance of music. The title of ‘composer’ did not indicate any accomplishment but lack of a better word.” His desire was to have the instrument compose itself. “With electronic instruments, Tudor had found a way to produce materials himself that would nonetheless behave as an ‘other’: he could quite literally let the instruments take the lead.”

Nakai acknowledges early on that writing about Tudor felt like “a giant puzzle,” since “a life inevitably takes on the appearance of a puzzle for anyone who tries to read it.” And while he allows that “a book that tries to show the way around a labyrinth ends up creating its own labyrinth,” he also asserts “if there is one thing absolutely certain about this book, it is that it could not have existed if David Tudor did not deliberately leave an incredible amount of materials and take great pains to preserve as much detail of what he did as he could—without telling other people about it.” The validity of this statement is borne out by the numerous sketches of scores and arrangements included, all of which came from Nakai’s extensive dives into the several archival holdings of Tudor’s work around the country.

Besides written work, Tudor also preserved the many electronic instruments he purchased and/or built (the majority of which Nakai includes photographs of). While Tudor rarely left a totally clear indication of exactly what he did in every performance, or even precisely which instrument(s) he applied and how, Nakai’s relentless pursuit allows him to reconstruct much, if not all, of what Tudor was up to on such occasions. This required an impressive amount of backward-looking detective work, with Nakai drawing upon every clue possible, from receipts to audience/observer commentaries along with Tudor’s itineraries and his own (usually quizzically misleading) recorded responses to queries.

Nakai’s title comes from these lines of Walt Whitman’s “A Song of Occupations”: “All music is what awakens from you when you are reminded by the instruments, / It is not the violins and the cornets, it is not the oboe nor the beating drums, nor the score of the baritone singer singing his sweet romanza, nor that of the men’s chorus, nor that of the women’s chorus, / it is nearer and farther than they.” This is clearly a nod to music’s abiding mystery and power over one’s consciousness. Reminded by the Instruments leaves little doubt of the utter sublimation Tudor achieved through his instrument.