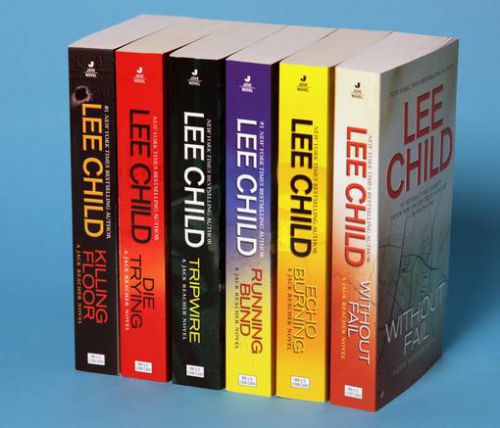 A hero ain’t nothin’ but a sandwich, but imagine one packed with fat and vitamins for a cheetah’s metabolism, protein for the garbage furnace of your heart. Like the diner food and coffee savored by Jack Reacher, scruffy giant of Lee Child’s thrillers, heroes are utilitarian. They’re only as good as the energy they give you. So forget the mythic journey parsed by Joseph Campbell. Heroes are about you, not them. They sing the song of tomorrow, the one about how life is good, so why not try?

Consider the stroke of inspiration that made Reacher both a happy drifter and decorated ex-Army military police. Maybe it took a British ex-patriot, Jim Grant writing under a nom de pulp, to see the American armed forces as our ultimate expression of socialism. For despite playing permanent hooky on adult life and preferring silence to talk, Reacher is clearly the product of a forced community, the kind of lifelong schooling where everyone’s a teacher. Unlike most strangers who come to town and mete out justice, he mentors in a crisis. “Good work, pal,” he tells the bus driver who keeps his passengers from exploding. “Grow up,” he tells a police detective still acclimatizing to reality.

The signature Reacher moment comes early in 1997’s Killing Floor (Berkley, $16), the first book in Child’s now-bestselling series, when it dawns on our sensualist, wry-eyed wanderer that a Central American-style death squad has recently stomped through a rural Georgia house looking for him. I forget the plot—you will, too—but there’s a beautiful breath of chill in the way conspiracy announces itself silently. “Thank God we weren’t here last night,” whispers his ally, a local cop. To whom Reacher composes a careful response:

I knew I had to sound confident. Fear wouldn’t get her anywhere. Fear would just sap her energy. She had to face it down. And she had to face down the dark and the quiet again tonight, and every other night of her life.
“I wish I had been here, “ I said. “We could have gotten a few answers.”
She looked at me like I was crazy. Shook her head.
“What would you have done?” she said. “Killed four men?”
“Only three,” I said. “The fourth would have given us the answers.”

In the real world, vigilante violence is a bad idea, of course. But we accept it in genre fiction because we know it’s not real. It stands in for all the things we can’t do. The difference with this particular daydream is what it allows us to rehearse: the quiet reframing of the possible, from recoiling to confrontation, helplessness to power. Reacher is a teacher, never mind his Incredible Hulk body. He even has the amused but non-condescending tone of a good one. Which might be why I’ve come across so many Reacher books in faculty lounges over the years. What sets him apart are his intentions with that speech to the cop (who, true to escapist formula, is also his bed partner). “I needed her to be bright, tough, self-confident,” he thinks. “It was working.”

The therapeutic value of this stuff can be gauged in direct proportion to Child’s effectiveness as a horror writer, which is frequently great (Stephen King is a fan). The classic Reacher scenario involves him trapped behind many thick walls with death waiting, thinking his way out of problem after problem. In 2009’s Gone Tomorrow (Bantam, $16), he’s jailed in a nightmare post-9/11 government torture prison under the streets of Manhattan—and the rest deserves a spoiler alert. Not only does Reacher bust out, with some effort, but he catches a cab, barefoot, to the Home Depot on 23rd Street, just before it closes, buys gardening clogs and a pry bar, then heads back for his friends.

At one point in 1998’s Die Trying (the titles do run together), Reacher is trapped by the bad guys inside a mountain in Montana, crawling through skeletons and rats into a seam that keeps narrowing as his light goes out.

He was using the dead flashlight like a blind man uses a white cane. It smashed on solid rock two feet ahead of his face. He heard the tinkle of glass over the rasping of his breath. He struggled ahead and felt with his hands. A solid wall. The tunnel went no further. He tried to move backward. He couldn’t move at all . . . He went rigid with panic. His throat clamped solid.

Reacher dies, and that’s the end of the story—just kidding. But what’s less predictable (second spoiler) is how he talks himself through that same darkness later:

He was hauling himself along through the tunnel and laughing out loud. Shaking and crying with laughter. He was no longer afraid. The tight clamp of the rock on his body was like a caress. He had done this once, and survived it. It was possible. He was going to get through.

Have any other crime books proved so self-consciously affirming? Where George Pelecanos offers life lessons and Richard Price his depressive dread, Child is all flip rationality and arcana, Ian Fleming without neuroses. It’s a tonic, because at some unconscious level we know despair is just terror in slow motion. And there’s enough of that going around that Reacher’s cheerfulness seems old-fashioned. Beyond his hot breakfasts, hitchhiking, and grandfatherly vernacular (“That’s for damn sure”), he’s a throwback to the imagined values of non-hardboiled WWII America: humility, responsibility, even monogamy (at least for the length of a book). This dharma bum admires Eisenhower for building the open road in the first place, sees creative insubordination as part of a job well done. Yet he’s free from his elders’ illusions about gender, sexuality, race, and American exceptionalism. The soldier bleakly observes (in 2008’s Nothing to Lose) that no war in his lifetime was worth the cost.

Conservatives may forgive Child his politics, because breakneck suspense is its own traditional value, and he so obviously loves America: the wide-open spaces that Reacher turns into battle maps; the military-industrial relics that show how well deadly things can be made. (Elaborate, abandoned military structures work their way into at least two plots.) The British-isms that slip past Child’s editors are charming (“about” for “around,” “memory stick” for “flash drive,” and a persistent misunderstanding of the expression “nothing doing”), but they’re minor compared with the wonderfully corny slang Child wishes we still used (“You bet your ass”). It’s a grateful tourist who describes the highway in 2001’s Echo Burning: “He said nothing. Just watched Texas reel in through the windshield ahead of him, hot and brassy and yellow.”

What keeps Child’s spell unbroken is his psychological specificity. The other characters are alive, the victims’ means of survival shown to us before Reacher awakens the dormant part of them that was once hope, etc. The villains are zestful—nobody writes them better. These bullies scrambled through their own skeletons to become a ruling class. And Reacher is funny because no loner is more aware of his function as a hero. Child’s Morse code prose is perfect for him, like Elmore Leonard by way of Henry Rollins. (Beloved tic of the books: “Reacher said nothing.”) A man with no possessions—Reacher owns a foldable toothbrush, period—has undeniable mythic and comic power. (“When does he wash his underwear?” my friend’s step-mom wonders.)

Grant has said he chose the name Child to come earlier in the alphabet, and wrote Killing Floor for money after losing a job in British television—the utilitarianism running both ways. Yet it’s clear he dotes on his character, and describes him as a projection of wish fulfillment. Before seeing the recent Jack Reacher movie (a surprisingly not-bad adaptation of 2005’s One Shot, and practicallyDie Hard next to the loathsome new Bond and Bourne), I knew my disappointment wouldn’t be in the casting of Tom Cruise in the title role (he manages something like ease, an acting miracle) but that I would no longer be able to mentally superimpose my face on an army-man body drawn by Jack Kirby.

Books are better for that kind of thing anyway. And in a way, the more fantastical and unlikely the plot of a Reacher book, the better. While 2010’s gut-twisting 61 Hours and Worth Dying For are ingeniously planned, 2012’s rollicking A Wanted Man has the whiplash twists of a storyteller literally making it up as he goes. And there’s probably no physical counterpart to the seaside Maine castle imagined in 2003’s Persuader, where Reacher battles a steroid-inflated monster who is about to force a kidnap-surviving college student to have sex with his mother. But Child keeps the pace so quick, the details so vivid, you barely notice the shadow puppetry he’s performing for real-life humiliations, violations, and traps—all the things Reacher explicitly helps process.

“Stay alive, and see what the next minute brings,” he keeps telling himself, remembering the advice of an old commanding officer. Child writes so well, you never notice these are words to live by.