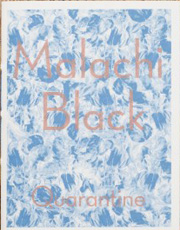 The best way to read Malachi Black’s Quarantine may be to start at the end. Or in the middle. Of course, there’s always the option of starting at the beginning—if you can find it. As a collection of crown sonnets, this chapbook is extremely cyclical. Black trudges from desperate pleading to fervent gratitude, from solitude to singularity, from life to death to rebirth. He recognizes the inherent activity and monotony in the crown sonnet structure and utilizes it to explore a period of quarantine in his house, in his thoughts, and in his faith. He sees himself, his ailments, and his god as if through a shifting kaleidoscope: with vibrant colors, shapes, and variations of light, too fleeting to preserve but too impressive to dismiss.

To travel the thematic aspects of this work, the reader must consider Time. Black explores the passage of time and the repetitious flow of thoughts and emotions. He transfers the reader through time but he simultaneously levels time’s partitions, dissolving hours into one constant wheel of motion: “There is no end: what has come will come again/will come again: and then distend: and then / and then: and then again: there is no end.”

The individual poems themselves echo the progression in time. The poems are arranged according to the time of day and titled according to that hour’s liturgical office: Lauds, Prime, Terce, Sext, None, Vespers, Compline, Nocturne, Vigils, and Matins. Thus, Black recounts his time spent in thought and in search of the divine.

While Matins are generally considered the beginning of the service (the midnight prayer, said after a short rest period), Black uses this title for his last sonnet. As opposed to separate prayers, Black’s poems become one continuous prayer, one constant appeal. His faith wavers, then wanes, then strengthens. “Matins” ends with the words, “Somehow I am sturdier, more sure.”

Left at this point, the poems tell the tale of a successful hero, stronger, solidified, and definite. But Black didn’t merely write a series—he wrote a rotation. On the second round through the book, the reader will notice that the first words of “Lauds” are, “Somehow I am sturdier, more shore.” Though the words sound the same, “shore” is one rising and falling tide, one disappearing stain on the sand away from “sure.” It is clear that Black wakes with the sense of uneasiness, aware that some form of stability has been lost somewhere in the transition of time.

Through the book’s circular motion, Black sooths the reader into the lulling journey ofQuarantine. The constant gain and loss of proximity and understanding produces a relentless “one step forward, two steps back” effect, which resonates within our human core. It is painful but it is beautiful. Even when faced with our transience, all we have and all we need is the reality that Black chimes: “I am that I am.”