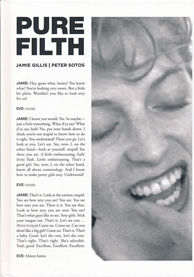 The appearance of a new Peter Sotos text is generally something of an event. Usually published in ridiculously small editions (his last book, Mine, was limited to a mere 100 copies), Sotos’s material speaks to a particularly narrow demographic. His work is a psychedelic amalgamation of true crime, personal memoir, societal critique and “fugue state” fiction exploring aberrant psychologies; often concerned with the private lives of pedophiles and the bizarre, lonely culture of gloryhole trolling, Sotos has carved out a niche virtually unexplored by any other contemporary writer. The sexual violence Sotos details, while explicit and often disturbing, is only a vehicle for a deeper exploration of humanity’s most nihilistic tendencies. His books offer up an eradication fantasy more on par with the arrogance of Nietzsche than the narcissistic pleasure questing of de Sade.

Pure Filth, then, a collaborative work between Sotos and pornography icon Jamie Gillis, seeks to navigate the blurry divide between the lowest point of human imagination and the reality of perceived degradation. As in any Sotos book, interpretation becomes key. Made up of transcripts from a selection of Gillis’s films, the book effectively becomes a black hole of self-images destroyed in the name of capitalism. Gillis is a legendary figure in the porn industry, having appeared in hundreds of films. He is considered a pioneer in the “gonzo” style of pornography, mostly due to his influential On the Prowl series in which porn stars are limo-ed around to various locations (usually adult bookstores) and offered up for free to average men. A number of the On the Prowl films are transcribed in Pure Filth, and while not entirely misogynistic (at least when weighed against some the more underground videos Gillis made, some of which appear here as well), the interplays between Gillis and his starlets become noticeably more condescending as the series drags on. “She was maybe the biggest pig slut whore of all the girls in this book,” Gillis writes of Joelani, one of the stars of Back on the Prowl 2, before conceding “of course, I mean that in a good way.”

This sort of duality informs the majority of the book. What Sotos attempts to find in Gillis’s work isn’t the terminus for depravity but rather the point where art and reality collide, regardless of that art’s supposed worth. There is a terrifying honesty lurking in the films Gillis made, a tendency to identify his female actors as persons even as they’re subjected to revolting sexual brutality (the final transcript, Eve, features the titular starlet being coerced into eating her own vomit off of Gillis’s penis after Gillis has asked her if she wanted to do something else with her life.) Gillis maintained the idea that the films he was making were pure fantasy, and that everyone involved knew it and were free to stop at any time. The transcripts paint a very different picture, though, one in which notions of self-respect are dissolved through financial domination and sexual humiliation. Sotos locates Gillis’s truth as residing “in the difficulties in his personal definition of fun.” Gillis writes in his introduction that his films “contain sexual situations that were taped with as little structure and planning as possible in hope that a little humanity in all its murky glory might get to shine through.” Reading through the films transcribed here, one wonders what sort of humanity surfaces from one person being browbeaten into eating the feces of another by the promise of an extra five dollars. Even Sotos feels compelled to comment, writing that Gillis’s proclivity to attempt to humanize his subjects as opposed to simply objectifying them “continues to strike me as very cruel.”

Ultimately, the point of Pure Filth becomes difficult to ascertain. It’s easy to read it as one provocateur glorifying another, or pornography as a self-perpetuating cycle of human loathing. The parade of defeat the book showcases defies such simple readings, though. Gillis is nothing if not intelligent, and his belligerent directions to his female stars throughout the transcripts betray an intimate knowledge of human psychic endurance, as well as a frightening charisma. “The importance of Jamie Gillis’s vision versus the artistic service of an elemental greater good is yours to play with,” Sotos writes. That may be true, but the book is as exhausting as anything Peter Sotos has published: reading page after page of Gillis dehumanizing his subjects becomes tedious, a sorrowful expression of pleasures at the outer limits.