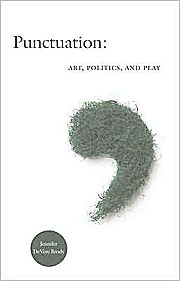 A puncturing of semantic space, Jennifer DeVere Brody’s Punctuation: Art, Politics, and Play performs at every turn a subversive politics that celebrates the margins as places where the real deal goes down. The author’s prefatory “For(e)thought” eschews the traditional introduction for a less argumentative, less confrontational starting point “for thought.” It comes as a welcome invitation that we may understand our role as readers to be one of choosing our own interpretations, accommodating a multiplicity of meanings, and being both audience members and participants in the play of words that performs her investigation.

If we didn’t already sense that Brody is working from the margins, she provocatively says goodbye to the Strunk & Whites and the Lynne Trusses (“go Truss yourself should you wish to be bound by convention!”) in order to explore how the marks of punctuation function in various semiotic fields. This isn’t to say that there aren’t some “rules” to her inquiry, but these “rules” do not have the final word, a refreshing reminder that academic discourse could be subject to change.

Despite the fact that French philosopher Jacques Derrida is only mentioned by name a handful of times, a trace of him is omnipresent. But, unlike “authorities” such as Strunk & White, Derrida’s influence is set into “play.” When Brody insists that “this book, rather than arguing a point, argues and plays with points,” Derrida’s concept of play (jeu) comes to the fore. Brody “plays around” in the sense that she refuses to commit to a single telos, a feature all too common in academic discourse that seeks to make a reductive argument and defend it. Also, she raises the stakes by asking important questions about how her observations on punctuation fit into emergent linguistic theories, and she explores how those theories apply to real artists with real concerns, such as the highly political work of Yayoi Kusama.

One fruitful and interesting line of “playing around” is what acclaimed typographer Robert Bringhurst calls “typographic ethnocentricity and racism.” In chapter three, “Hyphen-Nations,” Brody plays with the hyphen, a “problematic” punctuation mark because it can “migrate, appearing and disappearing seemingly without fixed rules.” The importance of hyphenation to identity politics forms the basis for this chapter, and Brody argues over the usage of terms like “African-Americans.” She points out—with periods, of course—that Theodore Roosevelt’s 1915 statement “there is no room in this country for hyphenated Americanism” is alive and well. The political rhetoric of “unity” really amounts to the necessary forgetting of one’s ethnic or racial history in order to become “American,” whatever that means. Beyond the more obvious, or marked, discourses of hyphenation, Brody also takes issue with those who, like Barbara Ehrenreich, have complained that they, because they are white, have “no race.” As Brody cleverly points out, Ehrenreich reveals her own privileged status by virtue of the complaint: “She ‘e-races’ whiteness as a ‘racial’ identity so that it becomes the (un)masked universal.” If it sounds here like Brody means business, rather than pure “play,” she nonetheless maintains her level of performativity through her discursive practice.

In chapter four, Brody explores the idea of quotation marks as “queer performance.” Relying on the poststructuralist observation that “all language is ‘meta,’” Brody looks into the ways in which quotation marks “queer” their enframed words’ relationships to the “normative” text. This punctuation performs the “simultaneous suturing of and separating of text(s).” But Brody is not content to discuss these theories in a vacuum—thank God! Discussing the fascinating work of Bill T. Jones, a performance artist who “really is” a black, gay, HIV-positive dancer, she suggests that “Jones’s ability to play with the practice of referentiality—to make his gestures gesture toward other things—is an example of the performativity of queer quotation.”

Again and again this book reminds us that artists such as Jones are not the only ones who can perform; throughout Punctuation, Brody both provides a stage for and sets her own critical practice in motion. In chapter five, “Sem;erot;cs ; Colon:zat:ons : Exclamat!ons !” Brody goes a step beyond, leaving us with a theatrical script, replete with a cast of characters, stage setting and directions, and dialogue. The characters include a couple of acronyms and the eye of a webcam, so we know what we’re getting into. If this section drags a bit, it is perhaps an indication that we, as critics, are still trying to collapse the annoying distinction between academic and creative discourse. Hats off to Brody for taking us someplace new.