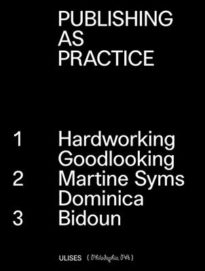 Publishing as Practice is the highly commended product of an artist-as-publisher residency held from 2017-2019 at the storefront art space Ulises in Philadelphia. Named after the poet, publisher, and philosopher Ulises Carrión, the space was founded by a curatorial collective composed of Nerissa Cooney, Lauren Downing, Joel Evey, Kayla Romberger, Gee Wesley, and Ricky Yanas. Carrión’s theory was that artist’s publications, such as his Ephemera magazine, not only represent a lineage on the page and in the printed artwork, but also in the communities they help form, a theory he termed the “bookwork.”

Taking this notion to its logical conclusion, the collective established this unique residency to support artists and collectives for whom community formation is central to their publishing practice. Each residency seems to have been given its own time frame for accomplishing whatever artistic goals were carved out by the opportunity, and as such were varied in duration. The three residencies detailed in this volume were given to Bidoun magazine, founded in New York City by Lisa Frajam; LA (formerly Chicago)-based artist Martine Syms; and Hardworking Goodlooking, a collective from the Philippines.

Bidoun has a global roster of editorial contributors and in addition to founding a magazine, the group driving the project also organized the Bidoun Library, “a collection of books, magazines and ephemera that documents, in the group’s words, ‘the innumerable ways that people have depicted and defined—that is, slandered, celebrated, obfuscated, hyperbolized, ventriloquized, photographed, surveyed and/or exhumed—the vast, vexed, nefarious construct known as ‘the Middle East.’” Formed after the events of 9/11 and in the aftermath of the invasion of Iraq, the publication throughout its life cycle has sought to provide a corrective to stereotypical depictions of Arab people and cultures, something tragically vital in the face of reductive and racially motivated “Clash of Civilizations”-style narratives.

Martine Syms’s career-long interrogation of how Blackness is represented pushes back against essentialist perspectives as well, often through the lens of publishing in the form of her imprint, Dominica, and art spaces such as Golden Age in Chicago, an initial inspiration for Ulises. Her project for the fellowship included a book shop and programming for Dominica in the style of an online “Home Shopping Network” through which to investigate indie publishing as “not only a site of commercial transaction, but also a locus of social change.”

For their residency as Hardworking Goodlooking, a publishing imprint and design studio founded in 2013 by Clara Balaguer, Kristian Henson, Dante Carlos, and Czar Kristoff, the group produced a publication, Kulambo Bulleting. In it, the collective “mapped itself onto the ‘mosquito press,’ the underground press work that circulated secretly in the Philippines under martial law in the 1970s during a period of steep suppression of free speech.” Their target is largely the sickeningly mass-murderous and tyrannical leader of the Philippines, Rodrigo Duterte (referred to throughout as DU30). Like other revolting, violent, know-nothing nationalists, Duterte presides over an administration that embraces violent misogyny, and “actively memes the Hitlerian.” They note that under Duterte, “the Nazi palm salute is adapted as a fist salute, given with arms extended horizontally,” and Duterte’s UN Ambassador, Teddy Boy Locsin, described on Twitter his wish for a “‘final solution’ to the drug problem, in the style of the Nazi Holocaust,” characterizing “drug users as subhuman and, thus, not eligible for human rights.”

Avant-garde artists’ books, of course, emerged from the various Secession movements of the mid to late 19th century, as salon discourse moved out of the royal courts into coffee shops and homes, and came to define a new public square where issues of the day could be discussed freely. They have evolved, throughout the more than a century since, in a role that has often pitted them against various forms of casually cruel, self-serving officialdom. But as David Senior of the San Francisco Museum of Modern Art writes in his forward, they have also evolved into a “contemporary print culture that does not seem totally translatable to a former time, this new function of books as a proposed tool to serve as a countermeasure to the forces of other media spaces.”

Indeed, Publishing as Practice provides a remarkable and important case study of that new role for the art form, rooted in the artistic ideals of an autonomy of art that helped point the way from those institutions of art that should be torn down or abandoned. It is an art form, Publishing as Practice shows, that may now also serve as an appropriate instrument against those media and state figures for whom the violation of basic human rights is just another day at the office.