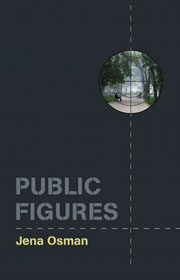 In Public Figures, her fourth book, Jena Osman gives herself an assignment: “Photograph the figurative statues that populate your city. Then bring the camera to their eyes (find a way) and shoot their points of view. What does such a figure see?” Osman, armed with a disposable camera velcroed to a stick, wanders the streets of Philadelphia, stopping at various monuments: an equestrian figure of a general in front of City Hall, allegorical figures in Fairmont Park, a hypothetical portrait of the medieval Viking explorer Thorfinn Karlsefni, and war memorials from the Revolution through World War II, imposing statues gazing heroically into the distance. But when Osman reverses the direction of her camera, what the statues are “really” seeing is often unimpressive: some tree branches, a jumble of wires, a tattered billboard.

Is this poetry? Lyric essay? Photojournalism? Yes, all three. It’s also part collage, and like all good collages, the found objects it contains only appear to be brought together by chance. The statues Osman documents and the vistas they gaze on provide material for several simultaneous meditations. To begin with, Osman suggests that public art, which we live alongside and frequently ignore, shows what happens to historical memory over time: as we take these statues for granted, we simplify the history they represent, the events which were immediate and urgent when the statues were commissioned but have since receded into an unexamined past. To the casual passerby, the civil war general on his rearing horse looks much like any other equestrian statue from any number of other long-ago wars. By stopping to inspect the statue and its physical viewpoint, Osman also shows us the history of the man the statue represents, the war he fought in, and the story of the statue’s creation, placement, and sometimes the controversies that have attached to it. Osman puts public memory back in the public memorials.

But Osman is a critical audience. The statues we calmly ignore every day turn out to be alarming: when you pay attention to these “invisible” figures, “you become aware that a fair number of these statues populating your city are armed.” As she considers each statue’s design, placement, and background, she illuminates histories the sculptors and commissioners never intended to display: the French colonialist origins of General McClellan’s civil war uniform; the inaccuracy of a story about a servant’s self-sacrifice for his master, which became part of the founding myth of Temple University; the shady history of a figure of a World War I soldier, identified in the Smithsonian’s database as “The Spirit of the American Doughboy” by Ernest Moore Viquesney, but actually a similar statue called “Over the Top” by John Paulding; the Don Quixote sculpture positioned at “the entryway to Philadelphia’s barrio,” where “the neighbors didn’t appreciate it . . . as it promoted a European version of Spanishness”; the necessary but utterly insufficient All Wars Memorial to Colored Soldiers and Sailors. Statues meant to show us heroism actually show us moral complexity. Men who fought to free slaves profited from forced labor. Well-intentioned gestures of goodwill can insult minority groups. During the long, repeating history of military might and disaster, one war is begun before the memorial to the previous one can be dedicated. Meanwhile, Osman also documents her process, including photographs of her camera apparatus and meditations on scene-setting, emphasizing the context of her own work.

As the book progresses, this study of public art turns into a new approach to memorializing a war without hiding its darkness. Our first hint of the book’s ambition is in the mysterious dialogue running along the bottom of some of the pages, concurrent with but apparently unconnected to the photographs and discussions of statues:

These words turn out to be transcripts from “various videos found on YouTube” of American military drone operators at work. As the book narrates the history behind the figures in Philadelphia’s public statues, Osman slowly starts to add photographs taken by soldiers in Iraq or Afghanistan, showing each other aiming imposing weapons at unseen targets or warily holding them across their chests, sitting in a barren field or inspecting the stairwell of an apartment building. These unromanticized war zone portraits neither celebrate nor judge, though they may provoke strong reactions in the viewer. Nor do they provide context: we do not know the names or locations of their subjects, though Osman gives credit to the photographers. Unlike the statues, which suggest finished stories—the hero looking towards the horizon in a statue designed after the war is over—these snapshots are taken in the middle of the action. The result is not just a sense of immediacy; it foregrounds moral ambiguity, the human lives of the soldiers and the human suffering they have the power to cause. The book does what the statues cannot: it lets its figures look back. Not just at trees and power lines, or at idealized vistas, but at us.