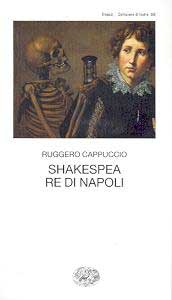 Two Neapolitan clowns, the king of Naples, a shipwreck, an alchemist, and a trunk full of waterlogged pages—sound familiar? Shakespeare's Tempest, you might think, but in this case the "drowned book" is not Prospero's magic tome, but an original manuscript of Shakespeare's sonnets. In his brilliant, fanciful, and deeply moving play "Shakespeare King of Naples," Ruggero Cappuccio, Neapolitan poet and playwright, imagines the untold story of W.H., the "fair youth" to whom Shakespeare dedicated the world's most celebrated sonnet sequence.

For centuries literary detectives have tried to trace the identity of this mysterious person, defined by Shakespeare as his "good angel." Two possible candidates for "W.H." include the Earl of Southampton and the Earl of Pembroke. Another possibility is that the sonnets are addressed to "Will Himself," i.e. Shakespeare. Oscar Wilde, among others, suggested that W.H. was Willie Hughs, a boy actor at the Globe.

In Cappuccio's fable, W.H. is a Neapolitan actor, "Desiderio," whose name, in Elizabethan English, could have been translated as "Will"; "H" stands for "Heart" as in "Will of my Heart." When Shakespeare comes to Naples, having heard that the people there "have theater in their blood," he discovers Desiderio and is so taken with his performance that he whisks him off to London, where he becomes one of the Globe's greatest interpreters of female roles. Years later, stricken by the plague, Desiderio returns home to Naples, bearing testimony to his privileged status as a famous actor: a letter from Shakespeare, a ring, and a trunk containing a manuscript of poems penned by the bard himself. Desiderio's ship is lost en route to Naples. He is the sole survivor, and nothing is salvaged but the manuscript floating in a trunk full of water.

Cappuccio's play, which first debuted in 1994, returned this winter to the Roman stage at the Teatro Furio Camillo. (The text has recently been published by Einaudi and a film is in the works.) The play interweaves roughhouse clowning, ribald anecdote, gripping suspense, and high lyricism in a unique fusion of Elizabethan drama with the great baroque theater tradition of Naples. These two worlds, as Shakespeare well knew, had many things in common: earthy humor, love of masquerade, a passion for poetry, and a conviction that "all the world's a stage," people "merely players." It's worth learning a little Neapolitan to appreciate the author's ingenious recasting of Shakespeare's sonnets into one of Italy's most musical dialects.