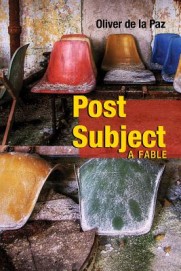 “Dear Empire,” opens each of this book’s ninety-five epistolary prose poems. This is followed with a declarative sentence beginning “This is” or “These are,” yet questions soon swarm the reader. Just who is being addressed here? And why?

The letters quickly establish a fallen-empire setting. “These are your ashes,” begins the first letter. “A fine dust clouds our skies,” it continues, evidence that the empire is crumbling before our eyes. In this world, there no longer appears to be an emperor to address. “Come back from where you dwell,” the letter-writer asks. The ruins and the language used to describe them evoke various possibilities as to who once ruled here.

At times the addressed figure sounds Biblical, as in “Every animal of this desert is yours” and “the floods as you had commanded.” At other times the addressee sounds secular: “you, fractured arm of the republics we knew” and “your prisoners were shot in the morning.” Yet at other times, it sounds as if a lover is invoked: “Your hands are beautiful.” Or could all these letters ultimately be about language: “We are not beyond your jurisdiction”? Uncertainty drives this book, and Oliver de la Paz brilliantly maintains this ambiguity throughout.

The reader encounters many emblematic figures in this “post-subject” world. There are volcanos, jellyfish, scribes, stevedores, dissenters, witnesses, even revelers, “running through streets with their arms full of streamers,” as if celebrating the collapse of the empire. Yet the presence of “the artist,” unlike the other figures, begins to feel precious, too laden with archetypal meaning: “Therefore the artist takes her brush and paints the cliffs in a way that expresses their joy.” Unlike the other figures, the artist too easily can be seen as an allegorical force for creativity.

Despite this cliché, de la Paz has created a world that consistently intrigues. Each time we believe we recognize the setting and have unlocked the mystery at the heart of the letters, the language unravels our certainty. Though the book sounds grimly post-apocalyptic—“there is no food” and “the machines are at our gate”—the overall effect of Post Subject: A Fable is wonder.