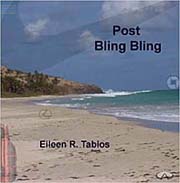 We all live in a company town. That much seems clear. The question of how we inhabit that town is the question addressed by Eileen Tabios's Post Bling Bling, a pair of cross-genre works. Here, Tabios investigates marketing culture through found and shared language in tightly defined moments, a collection of e-mails by Filipino ŽmigrŽs over four days in May 2005 and a summer issue of Vanity Fair.

The magazine's advertisements comprise the found texts of the first work, "Post Bling Bling." Peeled from slick pages, the marketed identities proclaim themselves. In serious stride, Robert DeNiro embraces: "My Life: / My Card: / AMERICAN EXPRESS." At Vegas' Mandalay Bay, you're invited to "Be Yourself At Home / Topless / Wet / White." The metal and verbal technologies craft "the new" in the Lexus hybrid, "not just the debut of a new car, but of a new category." The travel professionals with Ritz Carlton remind us, "THE BEACH IS SERVED / on a silver platter." In the end, it is "Your Choice. Your Chase . . . Subject to Credit Approval." Of course, this play can be extended to the book's front cover, a photograph of a south Pacific beach shadowed by familiar trademarks. We can read this beach in every dimension of authorship as well; the beach itself is trademarked. But is this marking done by the marketers or the author (her name and the book's title as prominent as the well-known circles, ambiguous squares, and swoosh of corporate logo)? The beach seems deserted by all but the photographer. How "dead" is the author? Capitalism itself?

The play here is wonderful, though not surprising. The found texts of marketing culture are poetry's bubble gum (and sometime sustenance). In The Maximus Poems, Charles Olson underlined that the "best is soap":

And for the water-shed, the economics & poetics thereafter? . . .
The true troubadours
are CBS. Melopoeia
is for Cokes by Cokes out of
Pause

Olson and Tabios recognize the mythic substratum that exists beneath our imagination of this "stuff," whether it is constructed of fructose, image, phosphate, plastic, or language. The imaginative spaces of this melopoeic underworld define the terrain of the work's investigation for Tabios. What lends the familiarity of these visual and verbal images? Does the actor own the plastic or does the plastic own the actor? What self am I supposed to be now? Whose choice is it, again?

What Tabios inserts into these familiar questions is the element of time. In "Post Bling Bling," time is defined by the moment of the magazine's issue itself, Vanity Fair (July 2005). Beyond this though, the poet explores our imaginations of the timeliness of all this "manufactured stuff" in the book's second work, "A Long Distance Love." Here, she initiates an e-mail discussion among "Filipinos in cyberspace" on the subject of "balikbayan boxes," the containers of American products that they have hauled back to the Philippines on subsequent trips to see family and friends. Respondents provide lists of these items (over-the-counter medicines, used clothes and shoes, unpopped popcorn, toys, etc.), including specific brands in certain cases (Costco vitamins, Clairol hair dye, Ziploc bags, Sketchers, California wine, Spam, etc.). Tabios's intended project is a section of a "poetic autobiography based on shopping lists." What emerges, as a respondent prompts, is a reconsideration of "colonialism [as] a very easy label." Poetic devices in themselves, the lists complicate things. The boxes force language here to re-measure our sense of (de-? re-?) constructed borders, how these spaces dissolve or precipitate in the larger spaces of marketing culture. As one respondent, Leny Strobel, asks, "When does colonial discourse become a luxury? For whom?"

The form of the work here is interesting. The e-mails (collected within a given timeframe and ended "abruptly" with a series of pointed but unanswered questions) engage late capitalism with focus (their tightly defined spaces on the screen/page) and particularity (Ivory, Loreal, Nesquik, and Armour). What items are needed, appreciated, or quickly discarded? Which are regarded (particularly by the buyers) as essential or "magical?" Paper towels produced in the United States are preferred by one family member to those produced in the Philippines; used books or magazines seem to some to be a waste of the airlines' baggage weight limitations. By their sheer volume, the lists of things themselves maintain some mythical quality. In the imagination of one respondent:

Tabios, in response, notes the remembrance of a woman who welcomed these gifts with the observation, "Oooooh. Soap even smells different from America."

These lists explore the realities of commodities as well as the magical qualities endowed by and within the common imagination. Understanding herself as a transcolonial poet, Tabios's work rethinks these qualities through the products' life in the time of late capitalism, their real and nostalgic values. For buyers, these nostalgic values are lent by temporal geographies (the past or home as a "simple place," the "exotic dimensions" of the faraway time or place). The imagination of needed or desired items invokes a sense in one respondent where "packing the boxes and seeing all the chocolate and makeup and bottles and bars of soap were so magical!" Another recalls, "i remember when we 'saved' many of these things in manila because of their value (monetary, colonial-stateside, etc.). we put some of them away like exhibits." How do we imagine others as we cross the very real borders defined by need and geography? Is it possible to escape marketing's influence on any such real or imagined journey? In the end, these speculations dissolve as the responses conclude, leaving the reader nostalgic for some sense of a completed (or consumed) narrative. What makes these things (this piece of art) magical? We are left with the blank page, a "P.S." reminder of the dislocations that ultimately define the world.

In Post Bling Bling, Tabios's work interrogates our imagination of the things made in this company town of a world by rethinking whatever it is we are pulling out of the box. Out of the page. Out of the numbers. Out of the ground.