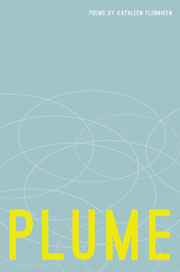 How do you encompass a danger that’s not perceptible to our senses, and, harder still, how do you write a gripping poem about it? Kathleen Flenniken bravely attempts to do just this in her poem “Radiation!”:

Invisible, tasteless, and odorless
but sounds on certain tongues
like deep distrust
of equations and lab coats
like panic wrapped for snacking
like the girl in Godzilla movies
who can’t run and scream at the same time
who chooses screaming

Flenniken never screams, however, in these quiet but damning poems on the history of the Hanford Nuclear Reservation, nor does she run from the site and its history. Hanford, part of the Manhattan Project during World War II, was constructed in southeastern Washington State on the Columbia River, as it would need an ample water supply for the production of plutonium. The bomb dropped on Nagasaki, on August 9, 1945, contained plutonium manufactured at Hanford. Decommissioned at the end of the Cold War, Hanford is considered the most contaminated nuclear site in the U.S., and is currently leaking radioactive waste.

Those familiar with Krisen Iversen’s recent memoir Full Body Burden: Growing Up in the Nuclear Shadow of Rocky Flats (Crown, 2012), will find a similar journey in Plume—growing up in the shadow of a nuclear site, later finding employment there, and eventually uncovering the lies and damage done to Americans and the environment.

Flenniken’s voice is always authoritative, no doubt due to her growing up near Hanford and later working there as an engineer and hydrologist. Take this stanza, from “Map of Childhood”: “and here / exactly where I am pointing / she and I eat snowflakes / as we walk each other home halfway.” In this memory of the author and a childhood friend coming home in Richland, just downwind of Hanford, she recounts a typical act of a child—eating snow. And yet, even before she reveals the contamination of Hanford, we sense the danger here. Childhood innocence cannot long survive when radiation lurks in snowflakes. Flenniken wisely lets the reader gradually uncover her betrayal, and ours.

Interspersed with the personal poems are those reflecting the extensive research the author has done on Hanford. These vary greatly in style. In her “Redaction” poems, for example, she takes official government documents and “redacts” all but a few words to reveal a truth hidden in the officialese. At other times, she excerpts an exchange in a transcript, such as this interaction between an Oregon voter and President Obama on May 18, 2008:

WOMAN: What is your policy [on cleaning up the toxic Hanford site]?
OBAMA: . . . I promise you I’ll learn about it by the time I leave here on the ride back to the airport.

Such excerpts show a skilled hand at provoking pathos—whether of humor or frustration or both.

Perhaps Flenniken’s most creative use of research comes when she focuses on the two words that make up the title of the poem “Green Run.” This phrase refers to the deliberate release at Hanford, on December 2 and 3, 1949, of lethal amounts of Iodine-131 and Xenon-133. Apparently this was done to help American scientists learn the effect of such a deadly release, and those downwind provided needed human guinea pigs—even if they never were never informed of the dangers. Here, in the closing lines of the poem, the author’s anger can be felt, barely contained by the poem’s meditative mode:

As in “Radiation,” the act of running away offers the sanest response to such willful irresponsibility.

To her credit, Flenniken doesn’t merely point fingers, which would be easy to do. As a scientist who worked at Hanford, as an American who supported her country during the nuclear build-up during the Cold War, she’s aware of the complexities of responsibility and our society’s tendency to avoid it, especially corporate and governmental responsibility. In “Museum of a Lost America,” she offers this confession: “I know somehow it’s my failure, my fault / that my own country betrayed me.” While there’s certainly irony in this mea culpa, the author also acknowledges her own role in the story of Hanford, a courageous stance.

Plume brings to mind other books of poetry that wrestle with the Hanford Nuclear Reservation and its consequences: Debora Gregor’s Desert Fathers, Uranium Daughter (Penguin, 1996) and Bill Witherup’s Down Wind, Down River (West End Press, 2000). Despite her deep probing of this nuclear wound, though, Flenniken’s book somehow feels unfinished, as if she has yet more to tell us about the deadly legacy of Hanford.