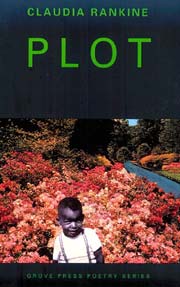 Oh, action of narrative Oh secret plan To chart To chart A small
piece of land

Plot. Claudia Rankine mines the word thoroughly. Her armature for this engagement with emotional implications and consequences is an Ur-plot: married woman and man make baby. Her characters exist elsewhere in art; Liv (Ullmann) and Erland (Josephson), who played Marianne and Johan in Bergman's Scenes from a Marriage, are replotted here. The actors are present as their characters; Rankine wants an echo of the film to shadow her project as she gives voice, mostly, to Liv, recording her resistance and submission to the idea of her unborn son, Ersatz, who inhabits her, body and mind, and plots to be born.

Plotted also are Liv's internal monologues and subtle emotional shifts. She is harrowed by threats to "I" in the face of Ersatz's "Here," which demands her recognition of flow, of a continuum, the stone-like weight of lineage and connection. Liv paints and repaints Virginia Woolf's drowned body floating, without volition, in the River Ouse. Plot, she reminds us, rhymes with rot. Woolf's pockets were filled with stones. The womb plots with death. Ersatz should turn back. The body sloughs cells: "She lets the tissue fall, wondering, Is the new always a form of a truce? a bruising?" To be fully here is the risk Rankine considers: "lost // far from here though I am here aiming."

Her devices bear notice. She shows the power of 'r' pressed with alliterative consonant weight and long vowels, finding these sounds markers for emotional content:

Ideally (so already never) what they desired, sired, is a love that
would flood everyday fears communicable: each broken step,
open depth, blackened call, searing grasp, oh ruined cell—but
it's a retarded and retarding love that frets.

Rhyme and rhythm controlled by stops force the ear to take in what Rankine has called the trace elements in words, how one word has a sound memory of other words in it, although their meanings may not be similar. She exploits this idea at various points in the book, producing sections in which word "proximities" are made to work as plot. The characters travel the distance between the words and link them. Thus, in "A short narrative of hand and face entitled Proximity of Clock to Lock," a repeated phrase ("He was biting his cuticle.") ticks off time. Meanwhile, the characters consider all of the decisions they must now make in preparation for Ersatz, decisions which spell confinement and systems, or lock. The skin Erland bites is dead, "little rips in the claims / the birth would make," and "where sperm dried this morning, his skin looked / ashen." Clock marries lock.

The text works like a mind: variously. Its visual surprises, Rankine's use of block print, boxed text, full stops mid-phrase, open field, conversation, word paintings and proximities, all complicate "Here" at the textual level: ‘Here, I freely give you this book to read; here, my hand is attached and this is between us.' The text, like Ersatz, is born with a cord that paradoxically frees readers from fixed (known) forms in order to allow them to be intimately present in its nuanced mind.