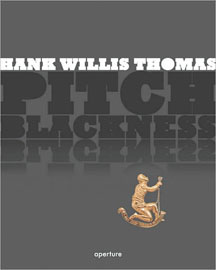 Born in Plainfield, New Jersey in 1976, Hank Willis Thomas lost his older, much-admired cousin Songha T. Willis to a cold act of unnatural violence in 2000. (“Good Guy Slain for a Few Bucks” read the headline for the Philadelphia newspaper version of the story.) Thomas, whose mother is the eminent artist and photography historian Deborah Willis, was an art student in California at the time; photography was elemental in his family life. In response to this unspeakable tragedy, Thomas turned his skills and insights to draw universal meanings from a very specific incident. His work, awarded the inaugural Aperture West Book Prize in 2007, seeks to decipher his cousin’s murder, deconstruct the culture that engendered it, and address the individual lives Songha left to mourn. Instinctively, and later intentionally, in the days, months, and years after the murder, Thomas made portraits of people who had known Songha; these, titled “Bearing Witness: Murder’s Wake,” are distillations of pain, the faces and figures of humans suffering loss. Staring back with expressions mingling incomprehension, sorrow, and ferocity, these witnesses ask a collective, insistent “Why?” that starts with tears and grows exponentially over five two-page spreads.

Extending the metaphor of those faces, Pitch Blackness is, in toto, a keening, aggrieved question mark. What might, in other contexts, come across as arch, dryly ironic, Jeff Koons-ian media critique (in “B®anded” and the later “Unbranded: Reflections in Black by Corporate America” series, all present in this book), or distanced, stylized model-making à la David Levinthal (see the excruciating “Winter in America” series carried out with filmmaker Kambui Olujimi—Pitch Blackness includes stills from their video collaboration), reveals itself as a complex visual threnody of grief and consternation. Thomas originally hesitated to link his cousin’s murder with the broader themes he had been pursuing in his work. It took several years and some careful persuasion to tie the extensive series of “Bearing Witness” portraits, and the family pictures that function as the book’s prologue, to his other projects that critique images of American blackness.

I say that the collaboration with Olujimi, which utilizes G.I. Joe and other action figures to animate Songha’s murder, is excruciating because of its unique synthesis of innocence and malignity, play and punch. As the opening text for “Winter in America” states: “Among the many elements Thomas and Olujimi intend to highlight with this project is the breeding of a culture of violent thoughts for young boys who are invited to author violent scenarios before they can even read.” If there is an answer to the pervasive “Why?” of this book, it may lie in this observation of a pathological, misanthropic, material-obsessed, pre-literate American culture. The question of what is bred by images expands in this book, from the trauma of his cousin’s death to the flawed framing so evident throughout popular culture.

We are all among those “left to mourn” for Songha and thousands of other victims of senseless violence. There are mirrors, dark shadows, and reflections at work, literally and figuratively, throughout Pitch Blackness, from its spot-varnished cover to the glossy, black pages that background the images throughout the volume; there’s no escaping ourselves as players implicated in the enactment of this social conundrum. The layout for the mourning portraits even leaves empty spaces in which we might find our own faces reflected; as the book notes. “The impossibility of [photographing everyone touched by Songha’s life] becomes its theme. The empty spaces […] represent those who will always remain unknown.” We should consider ourselves fortunate to have Hank Willis Thomas as our escort in this investigation. His commitment to images as vehicles for information, insight, and catharsis gives hope in a passage of grief.

For an excellent, in-depth conversation between Hank Willis Thomas and photographer Will Steacy that elaborates on themes in Pitch Blackness, see the Photo-Eye Magazine Online Feature.