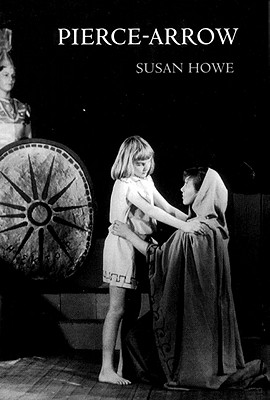 "Admit that a character who is exiting can be seen only from behind . . ." --André Gide

The final sequence of poems in Susan Howe's Pierce-Arrow is entitled "Rückenfigur," which means something like "figure seen from behind," although within the sequence it's translated as "retreating figure." This image points to a brief tableau from an earlier sequence ("Barrier of trees a / Darkened wood Evening / retreating figure") and might suggest that Howe is concerned with the pictorial, or at least with the visible, but for the most part she seems profoundly uninterested in seeing anything beyond the words on the page. There are lots of characters in Pierce-Arrow—E. D. Brooks, who collects pens belonging to famous authors; the Greek hero Achilles; the lovers Tristan and Iseult of medieval legend—but none of them has a body to speak of. The bodies here are, at best, shadows, like that generic "retreating figure" in the wood at evening, or like the "shadow in the water" that alerts Tristan to the presence of King Mark (whose name says just what he is: a mark). The only detailed visual images of human figures in this book aren't pictorial descriptions but simply pictures, like the silhouette of George Meredith reproduced on page 37 (another shadow), or the doodles from Charles Peirce's notebooks reproduced throughout.

The poems in Pierce-Arrow are studded with facsimile pages showing Peirce's charts, drafts, doodles, and calculations. Howe is clearly very interested in making this material visible. Her prefatory note makes a special point of mentioning that the photographs on these pages "are not shot from microfilm copies or photocopies." Howe wants you to know that your experience of the Peirce manuscripts has not been mediated through some unwanted technology of representation; what she values in the manuscripts can only be transmitted by direct contact. Photofacsimile, however, is an acceptable compromise, even though print technology fails to transmit anything of value: "[Peirce's] work is unpublishable in print form." This is a strong claim. For these papers to be unpublishable in print form, they would have to possess some special quality that distinguishes them from other manuscripts; they would have to be made of something other than words (since anything made of words can be printed). Or they would have to be made of words that are different from ordinary words, words for which we have no types and for which types cannot be manufactured. "We should have to use words," as Peirce puts it, "like those the chemists use—if they can be called words." Here, Peirce is imagining the possibility of a scientific language.

His scientific language, however, remains on the level of possibility, while Howe claims to have discovered such a language in his manuscripts. Howe does everything possible to produce the illusion that you are seeing the Peirce manuscripts, but she doesn't try to produce the illusion that you are seeing Peirce; in fact, she does everything possible to emphasize that her account of Peirce is based in secondary sources, and that all of her characters are text-based. Either they are producers of texts (such as Peirce) or they are fictional characters borrowed from other texts (such as Achilles): in any case, their depiction in Pierce-Arrow is mediated through another piece of writing.

The "Rückenfigur" sequence, for example, retells the "Tristan and Iseult" story by focusing on the transmission of the medieval romance over time, with the result that Iseult is not only doubled as "Iseult aux Blanches mains" but is further reproduced as "salt / Iseut Isolde Ysolt Essyllt / Bride of March Marc Mark in / the old French commentaries." The appearance of the characters and the actions they perform in a particular version of the story are peripheral to the significance they acquire by changing between one version and another.

The opening pages of Pierce-Arrow provide a lucid prose exposition of Peirce’s failed academic career: in 1884 Peirce retired to a farm called "Arisbe" after losing his teaching position at Johns Hopkins, apparently as a result of his marriage to Juliette de Portàles Froissy, whose background is largely untraceable. Howe dwells at some length on Juliette Peirce's attempts, in the years following her husband's death, to support herself by selling off his papers, which no library seems to have been eager to acquire. At some point in this exposition, all the sympathy that Howe has generated for Juliette is transferred onto the Peirce manuscripts, which remain unread and unexamined while terms that Peirce coined (such as "semiotic") and systems of philosophy that he developed (such as "pragmatism") achieve wide currency. "Academia wore Peirce / out long before / the massive literature / of Pierciana."

The story is essentially one of normalization: Peirce's philosophy becomes incorporated into academic culture at the sacrifice of its real value (which is preserved, untouched and unpublishable, in the manuscripts at the Houghton Library). Elsewhere Howe tells an abbreviated version of the same story with the phenomenologist Edmund Husserl acting as protagonist: "Scraps of notepaper / Refusing to settle into / stable Husserliana." In previous books she has told similar stories about Emily Dickinson. The story is always the same: there's something in the manuscripts that resists incorporation into culture, something that's unique, ineffable, and unreproducible, and you can't talk about it but it's the most important thing about them.

Howe is maddeningly consistent on this point: she doesn't talk about it. If something is unpublishable in print form, that means it can't be described in print form either, so she never identifies the properties that can't be translated from manuscript to print. Instead, she reproduces pages from the manuscripts as though their significance were self-evident. One might suppose that the remarkable visual sensibility of these pages is what Howe values and what can't be reproduced in print. But I suspect that the graphic eccentricities in the manuscripts are only an emblem of a refusal to conform (just as the graphic eccentricities in some of her other work, notably A Bibilography of the King's Book, or Eikon Basilike, stand for nonconformity).

In Howe's account, the Peirce manuscript becomes a mystical text whose value can be recognized only by initiates: "Though the essay was never / completed only a rough draft / I can still see the room those / unmeant thoughts composed . . ." And, as with all mystical experiences, there's some question as to who is supposed to be having the experience: is the poem trying to initiate us into the mysteries? Or are we only watching someone have an experience that we aren't allowed to share? To put it crudely, who is the hero of Pierce-Arrow? I would argue that the real hero is neither Charles nor Juliette Peirce nor the collected papers, but rather the researcher who descends into the archives to rescue them, the poet who shows herself to be hardier than "the hardiest of scholars" who "have made use of [Peirce's] manuscripts . . . only by way of photocopies."

Howe's poetics has always depended on a relentless effort to mystify the act of writing. As she stated in a recent interview: "The moment a word is put on the page, there's a kind of death in that. But if it wasn't put on the page, there would be another kind of death." These two kinds of death have a lot in common in that neither one involves any actual dying. The kinds of death available to a word are necessarily verbal deaths, which is to say that they're metaphorical deaths (non-death standing in for death). There's nothing wrong with metaphor, of course—traditionally, making metaphors is what poets are supposed to do—but the implications of this one are disturbing. Take note of the double bind Howe puts you in: writing and not-writing are just different ways of killing something. Note, also, that the second kind of death (the death of the word that wasn't put on the page) entails the death of something that has no material existence. (Can you call it a word if it hasn't been articulated? An idea for a word?) A word is expected to enjoy some kind of existence prior to and apart from its material embodiment as a word; moreover, this inarticulate existence is where its value resides; and this is the part that has to die.

Howe didn't invent the notion that poetry is made of some special stuff that isn't speech or writing, and that converting it into verbal material, giving it form, effectively destroys it. But her commitment to this notion is more serious than anyone else's, she is more aware of its implications than anyone else, and she uses it to write poetry that exerts an extraordinary aesthetic and moral pressure. Her poetry can't finally be separated from the thinking that animates it or from its sometimes stagy gestures. Indeed, her achievement is so complete that it's difficult to see from outside. Her poetry, like that of Wallace Stevens, provides an elaborate set of terms for talking about poetry, generating a running self-commentary that is "compelling" in a transitive sense: it forces itself on you, no matter how much you distrust it. But I would argue that this self-commentary should ultimately be resisted; though Susan Howe is a great poet—among the best we have—she, like most poets, writes with words. And the words she writes with aren't substantially different from the words in other books.