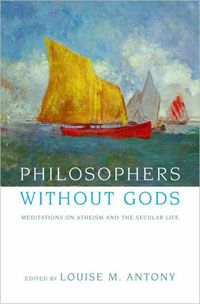 Americans, apparently, are developing a taste for the heathen life. The American Religious Identification Survey, performed in 2001 by the City University of New York, found that only 0.9 percent of Americans described themselves as atheist or agnostic, but a 2007 poll from the Pew Forum on Religion & Public Life found that a full 4 percent fell into that category. Such a rise in only six years ought to leave the patrons of orthodoxy wondering if they’ve got an insurrection on their hands.

In this climate of increasing disbelief a wave of atheist literature broke over the English-speaking world, with two authors, Christopher Hitchens and Richard Dawkins, at its crest. Their books, God Is Not Great: How Religion Poisons Everything and The God Delusion, are bestsellers. Many commentators latched onto the tone of these two books. Hitchens’s is riddled with temper-raising adjectives like “diseased,” “babyish,” “stupid,” and “awful,” and Dawkins is not beneath generalization ad absurdum as evidenced by a phrase like “the weakness of the religious mind”—inspired in the text by one believer, applied, through the stupendous alchemy of the definite article, to all.

But the profound limitation of these books lies not in their prose; indeed, both men are enviable stylists, blessed, in an entirely godless sense, with wit and rhetorical grace. Hitchens in particular possesses a vulpine sensibility that ambushes the reader with unexpected humor and elegantly veiled insults, as when he describes believers harboring apocalyptic visions in a world already threatening to warm us out of commission as “those who are not willing to wait.” Rather, the mighty HMS Hitch-kins, its sails billowing with erudition, runs aground on the very same shores as Pat Robertson’s dinghy: all of them are convinced of a transcendent truth.

Dawkins would declare that statement preposterous; Hitchens might call it flagitious. But both, nonetheless, assert that the rightness of atheism as a principle by which to understand the universe is justified outside the context of human experience. How is this so? Hitch-kins points out that religious allegiance and fervency are matters of circumstance: had Luanne of Colorado Springs been born Husniyah of Damascus, she’d likely grow up in a Sunni Muslim tradition as opposed to an evangelical protestant one. This would surely affect her beliefs come adulthood.

Atheism, however, is not put to the same test. It is assumed that belief is influenced by individual circumstance, a function of the myriad ways in which social, political, and family life shape experience. By contrast, atheism is simply universal. It out-muscles the competing truths of irreconcilable religious beliefs, emerging as the one organizing principle. Reason, which is its mechanism, stands divorced from the peculiarities of mere existence, its associated emotions, contradictions, personalities, idiosyncrasies, contingencies. Reason, in short, is not accountable to life. Hitchens and Dawkins refuse even to countenance the possibility that their views of the world, too, are the results of highly imperfect individual development, not some unassailable ideal.

What The God Delusion and God Is Not Great lack is the human adventure of unbelief—a sense of women and men struggling with their own conflicting ideas, incomplete thoughts, and fallible perceptions, to come to terms with a world so grand in its beauty and strife that it defies our ability to fathom all at once. Inevitably, that immense personal labor leaves us richer, more attuned to our own lives and maybe better equipped to live with others. Philosophers Without Gods, a rewarding, but flawed new text, offers several takes on that adventure.

Philosophers differs from the Hitch-kins model in many ways—not least the general absence of mockery, the lone outlier an essay from philosopher Daniel Dennett who is reliably obnoxious, calling himself and his friends (Dawkins included) “brights”—but most acutely through the incorporation of a section entitled “Journeys.” Here, several thinkers, including the volume’s editor, Louise Antony, lay out their individual paths to atheism.

There is Joseph Levine, who began life in the yeshiva only to find that he could not abide the chauvinism of “the chosen people” nor the injustices they have perpetrated in Israel. More fundamentally, he decided that to believe required denial of his humanity. Or consider the chapter “Overcoming Christianity,” in which Walter Sinnott-Armstrong discusses growing up devout in a closed-minded congregation in Memphis, where, we are told, there was more Christianity than there was “water in the Mississippi River.” His Christianity morphed through high school and college, where he gleefully encountered liberal evangelicals, only to find that belief could not withstand intellectual honesty.

While Levine and Sinnott-Armstrong appear to have found the culmination of their journeys in atheism, Philosophers does not leave the impression that rejecting god is the expressway to enlightenment. Daniel M. Farrell’s “Life Without God: Some Personal Costs,” a handsomely written reflection on the apparent dearth of meaning that accompanies life sans a supernatural caretaker, ends in the author’s wistful lament that he cannot eschew objective value altogether.

But the journeys are too often marred by the philosophical predilection to analyze events in exclusively intellectual terms. There’s no grappling with the emotional and psychological content of human life, the slippery guts of being. In one illustrative instance, Sinnott-Armstrong recounts trying to convert people to Christianity. He asked folks walking on the street whether they wanted to hear about Jesus. “I could hear myself as if I were a bystander listening to what I was saying,” he writes. “It sounded shallow. I had doubts and could see the problems in my arguments, but I did not tell them. I felt dirty.”

This is not exactly an arresting account—the author seems more concerned with being wrong than feeling his world change, reducing the powerful visceral reality of epiphany to a hackneyed phrase. Of course, it would not be fair to expect riveting prose from a group of academic philosophers. But the arguments against god and religion are well known. Do we really gain anything by learning which particular ones convinced this group of writers? With rare exceptions, the journeys in Philosophers are emotionally truncated. They lack the sort of characters a reader can contemplate, connect with, and inhabit. The messy parts are kept out of sight, and, as a result, so is the humanity.

The latter half of the book, “Reflections,” promises theoretical discourse, and it delivers, although several essays are redundant. The most exhilarating among them holds that many people who claim to be religious are, in fact, atheists. That essay, Georges Rey’s “Meta-atheism: Religious Avowal as Self-Deception,” contends that many theists are rational in other areas of their lives, but decline to apply to god the reason they otherwise employ reflexively. Rey does not go far enough, however. He might have pointed out that the moment a believer relies on logic and evidence to justify belief—as many, when pressed, will do—he has demonstrated that god is subordinate to reason. That is why creation “science” and evidence of supposed miracles is maddening and baffling. Real belief can make no recourse to reason. A believer who defends her faith through evidence, even faulty evidence, has no faith at all.

Though Philosophers devotes much scholarly effort to debunking god, the book’s focus is unquestionably more ethical than epistemic. It is animated by a line from Dostoevsky’s The Brothers Karamazov: In a world without god, Ivan Karamazov claims, “everything is permitted.” The authors of Philosophers, as well as Hitchens and Dawkins, point to a preponderance of evidence indicating that quite the opposite is true—it is belief in god that gives so many of us license to commit evil. But atheism does not have a monopoly on ethics, nor does religion on evil. Nonviolence is critical to many varieties of religion and for every Osama Bin Laden or George W. Bush, there is a Reverend Martin Luther King or a John Woolman, the Quaker preacher who worked diligently to abolish slavery.

And what of violent atheists? The “what about Hitler and Stalin?” argument, though practically a parody of religious objections to atheism, is a case in point. Hitch-kins dismisses it as one offered in bad faith; Dawkins assures us, probably correctly, that no one has spilled blood in the name of atheism. None of the authors in Philosophers pays it much heed. But the question needs to be taken seriously because it opens onto a larger problem. Just as religious people may feel compelled to do each other harm, so might atheists, and the fact that they do so for reasons unrelated to the absence of belief does not make their violence any less tragic. The question that ought to concern us is not whether religion or atheism causes more pain. Instead, we must ask: how can we be good, god or no god?

We might look inward, as some of the contributors to the Journeys section of Philosophers have done, and try to understand ourselves. That task, undertaken with honestly and humility, will never be complete, as Marvin Belzer’s essay amply demonstrates. But its ethical outcome is obvious. To pursue that often-burdensome enterprise requires that each of us have the opportunity to follow an individual agenda. To that end, we must reject evangelical atheism as much as evangelical religion, not pit them against each other, as Hitch-kins would have it.

This may seem a radically relativistic prescription, but even a relativistic society need not abandon ethical standards, as some unimaginative absolutists suggest, or tolerate unethical behavior just because it is founded in religious conviction. We can and should punish religiously motivated violence because our legal system enshrines the law of man above the law of god. Unfortunately, politicians bent on contemporary autos-da-fé seem unconvinced of this, and, in manifest contradiction of the first amendment to the constitution, repeatedly promote and pass laws to ban—among other things—same-sex union, embryonic stem-cell research, and euthanasia. These laws derive exclusively from religious appeals, and, as Sinott-Armstrong points out, there is no basis for American law outside the secular.

Atheists (and others) would do well to remind their fellow citizens and elected representatives of this point. A rule, established on religious grounds, may be good enough for a church, but it is not good enough for a state. Even these atrocious laws, however, are not to be blamed on fundamentalist believers, but on legislators and the American citizenry who seem to have forgotten that democracy does not mean acting on the majority’s every whim at the expense of those who disagree—a misconception shared by theists and unbelievers alike.

Ultimately, while it behooves us to make our government respect the many distinct journeys to goodness, we can do little save undertake our own. Philosophers Without Gods does not always strike the mark, particularly in some authors’ unyielding, Hitch-kinsesque demands that we all be logical, intelligible creatures. But for us mere mortals humble enough to recognize the incongruities of which we are composed, the message of this book is one of inescapable importance: you don’t need god to be good.