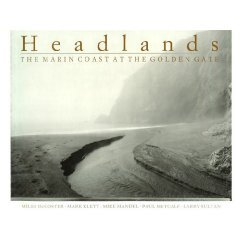 I have looked at this book often since Paul Metcalf died to bring back the day I spent walking in the Marin Headlands with him. Paul had come out to the Arts center there for the book-signing party. He wrote that he was staying on for a few days, asked me to drive over from Oakland. We'd hike, talk, have lunch in Sausalito, and he'd give me a copy of the book.

I knew that he wasn't happy with Headlands, a collaboration published in August of 1989. Years later he said that it wasn't included in his collected works as it was "just a book of photographs." Before it came out he had written to me about being "indeed restrained." He said, "this was a subject of much discussion amongst us. For one thing I was writing on consignment, for another I was working in collaboration, for still another I was working with the prospect that a commercial press might publish us. All of these were new to me. And yet it's funny: before accepting the book the publisher sent it out to two readers, for opinions. One of them raved about it, said it was bold and marvelous; the other said the text was wild and formless, not at all scholarly, and the whole thing should be rejected . . . so my radical friends will find me conservative ('Jeez, has Metcalf sold out?') and the conservative reader will find me radical . . . through all the shoals of collaboration, editors, etc. I found a middle course."

I left Oakland on a rainy cold September day. Crossing the Golden Gate I saw that the Headlands was covered with heavy fog. I was sorry, as he had said we would explore the area. But the moment I drove out of the tunnel that leads into the wilderness the fog lifted—dazzling magic, like when movies turn from black and white to color. (In the book he refers to the tunnel as a "rite of passage.") The cities, the traffic, the rain, and the noise had all disappeared.

Perhaps my memory of this day is completely affected by that surreal sunlit beginning. I know there must have been a few people, later, near the bridge, or at the ranger's station, but for most of the day and certainly as I drove through the hills to the center, there was not a car, not a person to be seen. Anyone planning to come over must have been discouraged by the fog and rain.

Paul was staying at the center, which used to be Fort Cronkite's army barracks. Only one old car there, and not a soul anywhere, except for Paul, standing on a hill above the barracks with a wide grin and a wave. He wore boots and jeans, suspenders and a plaid flannel shirt. A gentle giant of a man, he walked ahead of me, gesturing with big swooping motions. I remember him large against the sky or the tawny hills or the ocean. I saw him as I always felt him and his work—larger than life—although sometimes that day, when he'd be hopping from stone to stone in a brook or scrabbling up a hill, he would seem like a lanky adolescent kid, guffawing at the bad jokes we called out to one another, many we had already told in letters. (Our correspondence wasn't very literary.)

As we walked he told me about where we were walking. This was magical too. The place came alive as he filled it in, came into focus and detail, like a photograph in developing fluid. That sweet hollow was the site of the first farm house, Silva's, a Portuguese who grew artichokes. Those eucalyptus were brought from Australia in 1850. The oaks were here 5,000 years ago, when the Miwok tribe lived here. Acorns were their main staple. He told me—sang to me?—the names of plants that grew here: Hog fennel, Baby blue-eyes, Zigadene, Milk maids, Hound's-tongue, ripgut brome. He told me how the land itself was formed: Basalt erupted near the Marquesas, floated east until it attached itself to the mainland. He listed the migrations that began with the Russians, the Spanish, the Portuguese, and the English. He could have talked about the Headlands for days. I wondered if he had stayed on because it was hard to leave a place he had come to know so well.

Inside a dark, damp bunker his actor's voice echoed against the walls, brought to life the soldiers crouching in them, watching for the enemy. The government had been trying to arm this spot ever since the Civil War, up until the last powerful Nike Missile was removed in 1974. It seems amazing that the land itself was not abused. The military, over the years, had so wanted their gun batteries and missile launchers to be secret that it is still possible to think that they were never there. They are built into the land and by now grass and wildflowers have grown over them. The Nike launch pad is a mysterious cement circle fringed with Scotch broom, a Nascar eye on the top of a hill. The few visible surfaces are covered in graffiti.

It was in Battery Townsley that we looked straight out to sea and sky, to the spot just beyond the bay. Paul told me that after Pearl Harbor the soldiers were on fifteen-minute alert, that for at least a year 150 men lived within the battery. It seemed a shame somehow that no-one ever attacked them after they went to all that trouble. So I was pleased when Paul told me that on December 24, 1941, nine Japanese submarines were right out there where we were looking, with orders to bombard San Francisco with everything they had. Only two hours before this was to have occurred, Admiral Osami countermanded the order.

With his eyes fixed on that very same blue-and-blue spot of sea and sky Paul said, "In 1597 Sir Francis Drake's ship stood off there, just past the Farellones. He waited fourteen days for the fog to lift. His chaplain wrote that the fog was 'vile, thicke and impenetrable.' It wasn't until 1775 that the Spaniard Juan Manuel de Ayala would sail his ship beneath the Headlands and into the bay."

Looking back, that rectangle of sky and sea reminds me of a computer screen. Certainly neither of us had a computer then, nor would we ever take to them later. But I see it now as a sort of tabula rasa where his writing was taking place. I knew then that I was hearing how he wrote.

Headlands is a beautiful book, especially the photographs of the land itself. The physical and military history is fascinating. It is written in a linear, conventional manner. The details of place, the vitality of each person described are what make it shimmer. It is unmistakably a text by Paul Metcalf. Every once in awhile, the page shoots out sparks, like falling stars, and I can hear his nasal New England drawl: "sooty shearwater, marbled godwit, sanderling, willet. Ruddy duck, scoter and coot."

Many more birds are to be seen there, although I remember only hawks and gulls. Circling turkey vultures. He said he figured we'd starve if we didn't head out soon for lunch.