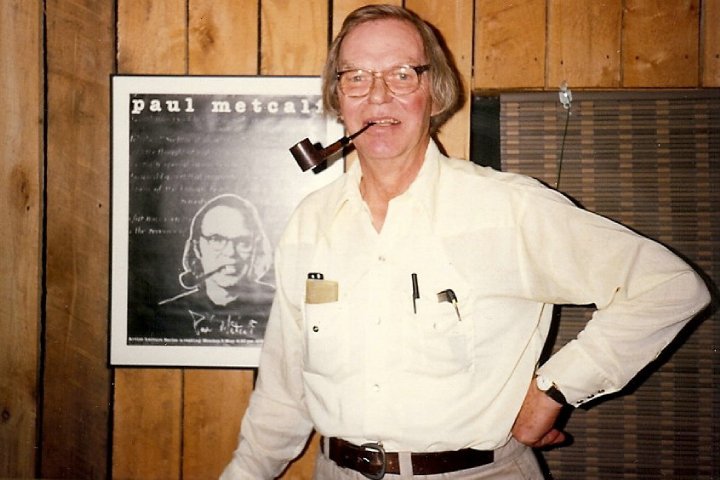 The following piece was composed for the Paul Metcalf Memorial Reading held in Minneapolis on March 14th, 1999

Paul Metcalf was born in 1917, in the midst of the first World War, and died in the last year of the twentieth century. His lineage included a famous maternal great grandfather, Herman Melville, and on his paternal side he was related to Roger Williams, founder of the state of Rhode Island. A lifelong student of history, folklore, ecology, and ethnography, he nonetheless did not fit into traditional academic life. He was fond of telling audiences that he and Bill Gates dropped out of Harvard, while the Unabomber, Theodore Kazinski, graduated with honors.

Paul Metcalf never did use a computer, but long before gigabytes and hard drives entered the lexicon, he understood that we were living in the age of information. Massachusetts was where he lived, but his real home was the library. Perhaps it was the view of all those spines leaning next to each other, facing each other in their respective bookcases, that led to the juxtaposition of texts, texts about ideas, people, places, and events that came to define his literary technique. And because Metcalf's source for this information was the library, not the computer, he understood that the internet was in many ways, simply an extension of the traditional card catalog. And that it is not enough to be able to access information—the challenge is to see the interstate highway system as the part of the nation's central nervous system, to see Columbus reaching the New World as the sperm reaching the egg.

I had just finished giving a presentation on the history of books and printing at a small independent bookstore in Northampton, Massachusetts, a store that has since folded, when a tall elderly man walked up to me, introduced himself as Paul Metcalf, and handed me a manuscript. Normally I would have begged off, but I knew Metcalf's work, and was delighted to take it. But when I got home, the manuscript got buried for a few months. Then he wrote me a polite letter asking about it, so I dug it out, and when I read it my life was changed forever. Unlike his other work, the piece he had given me was primarily based on one text, an anthropological study of indigenous people of Peru. But like his other work, it had a scope of historical vision and a depth of compassion that I found breathtaking. I don't know what led me to think of publishing his collected works. There were times when I wondered if I'd lost my mind. But as I look at those three volumes, it stands as one of the defining moments in my life as an editor.

But beyond his magnificent work, I also am grateful for Metcalf the man. I remember asking how long it would take to drive to his house from Boston—it took much longer than his estimate. The next day I asked how long it would take to get to my next destination—again it took much longer than his prediction. Then I remembered that almost all the stories he had told the night before had, at one point or another, involved a speeding ticket. I can still see the wood-burning stove he used for cooking, and to heat his home. He was a big man who moved with the grace that called to mind his youth as an actor. Able to tell stories about literary and historical figures of the past and present with equal ease, conversation flowed around and through him like a gently bubbling never-ending stream.

But we are gathered here tonight in part in tribute to what he achieved as a writer, as an artist. There are many theories about the role of art. Some see it as a reflection of society. Others as an agent for societal change. But I always recall one of the slogans of my youth when I think about art—the personal is political. Art can only affect society if it can affect individuals, one at a time. For this individual? I want art to help me look at the world with new eyes. And more than any other writer I have read in the last thirty years, Paul Metcalf has helped me look at everything in my world differently. Books, magazines, diaries, memoirs, newspapers, the past, the present, the earth, and the skies, all have been forever changed, for me, because I have read Paul Metcalf's work. I can't think of a higher compliment to pay a writer, or a friend. I will be forever grateful I had the opportunity to meet him, and to publish his work.